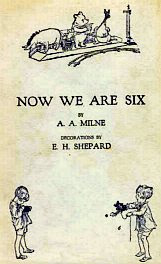 Gates of Vienna has been around such a long time, at least it seems so to me. It is difficult to remember life before blogging, much as it is hard to recall life before children. But six years isn’t much — given, say, the age of the broken arrowheads we often unearth in the garden, it’s a youngster in comparison.

The accumulation of time amounts to well over eight thousand posts and more than eight million visits. That’s a lot of water over the dam…or perhaps a damn lot of words?

It is certainly a most amazingly blesséd encrustation of readers, writers, and friends. A few enemies to leaven the mix, just to remind us (in case we should forget) that we really do walk through the valley of the shadow of death sometimes.

But the naysayers are few and mostly harmless. As one of my children once said, “God told us to love our enemies but He didn’t say we couldn’t have any”. Amen.

When reminding me of this sixth year anniversary, of course the Baron and I both said, in unison, “Now We Are Six”. For those of you not familiar with the poems of A.A. Milne, let me recommend them. If you’re struggling to learn English, then his lines will give you a sure feel for the cadences of a most idiosyncratic tongue. And for those of you entering your second childhood (or having failed to leave your first), Milne is an apt companion.

There is even a Facebook page for “Now We Are Six”. Obviously someone remembered a parent’s voice reading those poems and decided the whole Facebook world should be let in on the secret.

The journey from the first post at Gates of Vienna to now was full of surprises for both of us. We started out with two ideas in mind: to stand by Israel and to raise American awareness of the dangers of Islam.

Israel may be even more in jeopardy than it was back then; it is certainly more weary and besieged. Our hearts go out to Israel, the canary in the coal mine.

Islam is more aggressive and arrogant than ever. We learned slowly that jihad is forever until it is vanquished. We understand so much more fully now the strictures of Sharia and how inflexible are the laws under which every Muslim back is bent. But Islam will not prevail; supremacist ideologies never do. People may go through great travail before it is cut down to size, but circumstance and custom will prevail against this invader and annihilator of cultures. It will not stand.

Here is the title poem of Milne’s book:

When I was One,
I had just begun.

When I was Two,
I was nearly new.

When I was Three,
I was hardly me.

When I was Four,
I was not much more.

When I was Five,
I was just alive.

But now I am six,
I’m as clever as clever

So I think I’ll be six now
Forever and ever.

Ah, yes, forever. Indeed, that will be the case as long as freedom of speech is still the law of the land and as long as we post material which others want to read, or until they carry us off to the Home where we will rest, nearer to Forever than we are at the moment.

Is it a slog? Sometimes. Particularly for the Baron who needs must carry the major share of the burden for our blog. I wish I still had the energy of our early days in cyberspace, but the slings and arrows have taken their toll. Had I but known, I should have called on Saint Sebastain rather than Dymphna.

What is happening in American and Europe gives us hope. People are laying their lives and livelihoods on the line in the cause of “ancient liberties”. What one person does can’t be compared with the others, but they all can be celebrated. There is much in The Long War to give one careful optimism, even as we step to avoid the potholes and wreckage caused by those who hate the West, even and perhaps especially, our internal foes who despise their own culture.

In looking at Milne’s work whilst preparing for this post, I ran across some lines he wrote in the darkest part of 1918:

Oh, I’m tired of the noise and the turmoil of battle,
And I’m even upset by the lowing of cattle,
And the clang of the bluebells is death to my liver,
And the roar of the dandelion gives me a shiver,
And a glacier, in movement, is much too exciting,
And I’m nervous, when standing on one, of alighting —
Give me Peace; that is all, that is all that I seek…
Say, starting on Saturday week.

Indeed, Mr. Milne. That’s just about the right span of time for any reasonable person. Would that it could be so…

Our first post was on a Saturday. Today is also a Saturday. In between, if my calculations are correct, three hundred and twelve more Saturdays have come and gone.

So Saturday week sounds good to me.

6 thoughts on “Staying Six Forever and Ever”