We posted a couple of weeks ago about the kerfuffle caused by the Indonesian ambassador to the Netherlands, who expressed displeasure about the possible influence exerted by Geert Wilders on the new Dutch government. The ambassador made his remarks in advance of Indonesian President Susilo Bambang Yudhoyono’s planned state visit to the Netherlands.

Now it seems that Pres. Yudhoyono’s visit has been postponed, and under the most peculiar of circumstances. Our Flemish correspondent VH has compiled a report with the latest news, based on his translation from Dutch-language sources. 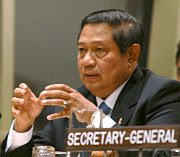 On Tuesday October 5, Indonesian President Susilo Bambang Yudhoyono suddenly postponed [or “delayed”] his state visit to the Netherlands, which would have been from October 6 to October 8. The decision was because Indonesia had received information that Yudhoyono might be arrested in the Netherlands for alleged human rights violations. [source Elsevier] From the Jakarta Globe:

Announcing the cancellation of the trip at Halim Perdanakusuma airbase in East Jakarta on Tuesday with his plane waiting on the runway, Yudhoyono said it was a matter of national dignity. … Although he made up his mind just 45 minutes after receiving reports that the court hearing would open on Wednesday, he said he had consulted the vice president and several ministers over what to do.

The president in exile of the Republic of South Moluccas [RMS, pro-independence group] had filed a lawsuit [“Kort Geding”, or Summary Proceeding] against the Dutch State on Tuesday afternoon; the RMS would ask the court in the Hague for the arrest of the Indonesian President.

However, in addition to the fact that the President of Indonesia would have diplomatic immunity during his visit to the Netherlands, on Wednesday October 6 the court rejected the demand by the RMS and ruled that the Indonesian president may not be arrested on arrival in the Netherlands. “The court in the Hague on Wednesday rejected the claim by the exiled President of the Republic of South Moluccas (RMS) John Wattilete against the Dutch state.” The court assigned the costs of the lawsuit to the RMS.” [source Elsevier]

Indonesian President canceled State visit because of “the problem Wilders”

[Source Nederlands Dagblad, quotes and some links added by the translator]

There were more reasons for the cancellation of the state visit by Indonesian President Yudhoyono than the request for his arrest by the RMS. According to sources directly involved, the RMS case was only “the stick to beat the dog’’. That dog was especially “the Wilders problem”.

Indonesian President Yudhoyono is receiving increasing criticism at home for his cancellation of the state visit to the Netherlands. “Mind-boggling, short-sighted and unconvincing” said the Jakarta Post in an editorial, pruning the arguments of the President severely.

President Susilo Bambang Yudhoyono’s decision to “delay” his trip to the Netherlands for fear of being arrested for alleged human rights abuses is both mind-boggling and short-sighted. His rationale is “unconvincing”; it was highly unlikely that the arrest would have taken place. From the Jakarta Post:

“It is a common practice in international diplomacy for nations to grant immunity to visiting foreign presidents. The government of the Netherlands said it would uphold Yudhoyono’s immunity and treat him as a most welcome guest. … The President’s decision, allegedly made to “protect the nation’s dignity”, quickly boosted the President’s standing and appeased the nationalist camp at home. In the long run, however, it will jeopardize the country’s relationship with the Netherlands. … The delayed visit was also regrettable as it prevented the President from obtaining the Netherlands’ written recognition of Indonesia’s sovereignty, which would have automatically cleared a diplomatic hurdle that has existed since the Netherlands handed over the archipelago to the Indonesian government in 1949.

The Netherlands, which colonized Indonesia for more than three centuries, has never formally recognized the sovereignty of the Indonesian government, despite the 1949 roundtable conference that forced the Netherlands to surrender control of Indonesia.

If the President had continued with his visit, he also would have been able to improve the Dutch understanding of Islam. As the leader of the world’s most populous Muslim-majority nation and its third-largest democracy, Yudhoyono has the credentials to speak on the subject of Islamic tolerance. He could have also promoted Indonesia as a role model for Muslim countries. Islam in Indonesia is different from the conservative strain that is practiced in most Arab countries.

Last but not least, the President could have used the visit to boost economic cooperation between Indonesia and the Netherlands and tap more investment for Indonesia. According to the Indonesian Embassy’s website, the volume of trade between Indonesia and the Netherlands two years ago was US$3.9 billion and Indonesia enjoyed trade surplus of around $2 billion. … The Netherlands is also noted as one of Indonesia’s largest sources of aid for education, governance, water management and other areas. Given the significant amount of the Dutch investment and aid in Indonesia, the minor diplomatic mishap that occurred after the incident should have been prevented.”

Moreover, it is openly questioned whether it was only the lawsuit — in which the RMS demanded President Yudhoyono’s arrest — or whether other motives might have played a role. The Jakarta Globe headlines, for example: “Indonesian President Missed the Big Picture Yet Again in Canceling His Visit to Netherlands”.

… This week, he blasted the Netherlands and its judicial system, and also canceled a state visit, because some has-been Indonesian separatist group filed a case against him in a Dutch human rights court.

It didn’t matter that the sudden cancellation was a massive insult to Dutch Queen Beatrix, or that the Hague District Court summarily rejected the case or that Yudhoyono has diplomatic immunity. … the president said there might be an attempt to arrest him during his state visit. The key word here is “him.” Wouldn’t the first state visit to the Netherlands by an Indonesian president in some 40 years benefit the country, even if there were protesters there?

In his response to the criticism, President Yudhoyono went even further than in his earlier statements. The Dutch court hearing would be “unethical” and the hearing on the day of his arrival date “violates ethics and norms of a bilateral relationship’’ as he defended his decision again a few days ago.

But also on the Dutch side there is the belief that other motives played an important role at the background. The Summary Proceeding [“Kort Geding”] by the RMS indeed was the direct reason for the visit to be postponed, but — as a source directly involved in the consultations around the state visit told Dutch newspaper Nederlands Dagblad — that Summary Proceeding still was “a stick to beat the dog”.

For some time the Dutch had realized that President Yudhoyono would rather postpone his visit, after Wilders had gained a major political role due to his election victory. For as President of the country with the largest Muslim population in the world, the Indonesian President would be visiting the country of one of the most outspoken anti-Islamic politicians in the world. Moreover, the timing of the visit clearly became ever more uncomfortable because of the leading political role played by Wilders [in the formation of the new government —translator].

When the latter, after an unfortunately worded statement by the Indonesian Ambassador Habibi [who indicated that voters who preferred Geert Wilders’ party “suffer from a fear psychosis” — see also Clowns and Psychotics at GoV] advocated that the Indonesian ambassador should “have his ears cropped diplomatically”, the revulsion became even greater. Nevertheless, in the opinion of those involved, Yudhoyono would still have come to the Netherlands, if it the court case by the RMS hadn’t provided the Indonesian government with an excellent occasion to immediately also deal with “the Wilders problem”.

Wilders responded this Saturday via Twitter: “Whatever the reason is that Yudhoyono will not come to the Netherlands, I will not shed a tear. He earlier declared me persona non grata in Indonesia.”

3 thoughts on “The Stick to Beat the Dog”