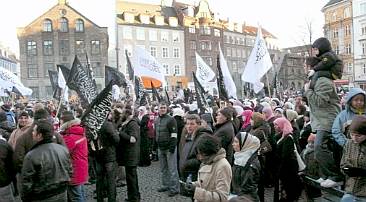 I wrote last week about the Hizb ut-Tahrir conference that was held in Copenhagen on October 3. Pia Kjærsgaard, the leader of Dansk Folkeparti (the Danish People’s Party), has some choice words to say about the menace of Hizb ut-Tahrir’s open provocations in the heart of Denmark.

Many thanks to Anne-Kit for translating this piece from the Danish People’s Party website:

Islamists must be met with bans

For the past few weekends the [Danish] political parties have held their annual conferences, putting forward their views on the current political challenges. Perhaps it is with this in mind that the fanatical international Muslim “party” Hizb ut-Tahrir, which is banned in countries like Germany and Sweden, chose to hold their recruiting convention last Sunday at the Bella Centre [in Copenhagen].

In Denmark Hizb ut-Tahrir is mainly notorious for distributing fliers calling for the killing of local Jews and Western government leaders who supported the war in Iraq. The party’s goal is the establishment of the Muslim “Khilafa”, or state, governed according to the Koran, complete with Sharia specialities such as stoning, lashing and chopping off of hands — plus of course oppression of women and the abolition of democracy.

If you went looking for celebration and happy delegates you would have looked in vain. The title “The role of Muslims in the West” set the tone for the proceedings in a strictly gender-segregated hall. Among other grievances, Hizb ut-Tahrir is angry that Western countries are trying to integrate Muslims and that Western women are “for sale” because they live as free individuals.

Hizb ut-Tahrir’s Danish spokesman, Chadi Freigeh, claims that Muslim women are taken hostage by Western countries, and he unequivocally warns Muslims against integrating in the West. And like so many other fanatical Muslims before him he refused to answer critical questions from TV news reporters — perhaps because he didn’t like the sight of protesters outside the Bella Centre.

I do not intend to delve deeper into the substance of Hizb ut-Tahrir’s politics but will say only that the appearance and rhetoric of the party conjure up uncanny echoes of the fascist movements of the twentieth century. The Nazis too knew exactly what was best for women and had enormous “respect” for them. They were to be used as incubators to build the Third Reich — a precise analogy to the Khilafah state of Hizb ut-Tahrir.

Another Nazi analogy is the cultivation of violence — whether in the shape of exhortations to violence or direct violence. This brings us to the crux of the matter: As early as 2002, when Hizb ut-Tahrir was distributing fliers with Koran verses calling for the killing of Jews, Dansk Folkeparti (DF) [the Danish People’s Party] proposed a Bill to ban the party with reference to the Danish Constitution’s clause on “associations which operate by or encourage violence”. We repeated this proposal in 2008, but in vain.

Coincidentally it was in 2008 that Villy Søvndal kick-started the marked progress of Socialistisk Folkeparti (SF) [The Socialist People’s Party] with his declaration that Hizb ut-Tahrir should “go to hell” — but unfortunately his Party did not back up DF’s proposal; it was just hollow speech. What went wrong? The proposal failed because the State Prosecutor did not find evidence to suggest that Hizb ut-Tahrir was violent. Perhaps not, but is it not also violence to encourage and exhort to violence?

That Hizb ut-Tahrir in 2010 can run a public meeting in Copenhagen, and to top it off has the blatant cheek to invite members of parliament and other public representatives to a gender-segregated Khilafah meeting at the Bella Centre, can only be interpreted as a complete mockery of Danish democracy.

But unfortunately this kind of mockery is a logical extension of another event organised by fanatics: A Ramadan dinner at Christiansborg [Parliament House] where SF’s Social Affairs spokesperson, Özlem Sara Cekic, offered herself up as a useful idiot for the Islamic/Turkish newspaper “Zaman”. After all, if these Islamists successfully invited themselves into the home of [Danish] democracy, why shouldn’t Hizb ut-Tahrir also try to invite politicians? What if even one of them swallowed the bait …?

But apart from Villy Søvndal’s solitary remark addressed to Hizb ut-Tahrir, SF don’t want to tangle with the Islamists. During a radio debate on freedom of expression last Sunday a member of SF’s National Leadership Committee, Mattias Tesfaye, declared that he was unwilling to take Hizb ut-Tahrir to task because he and his family live in Nørrebro [a heavily culture-enriched district of Copenhagen]. He much preferred traipsing around the country declaring that many employees are too scared to criticise their employers — something which can only be described as relatively risk-free, given that Danish bosses rarely employ the same methods as the Islamists.

No, in reality only Dansk Folkeparti has called for a ban on Hizb ut-Tahrir. As long as the party is legal it can hold public recruiting drives, and it is obvious that the Islamists have set their sights on rootless immigrant youths, among others. Opponents of a ban say that it won’t help and that it will make it harder to monitor activities if they are hidden. This is of course nonsense. When Hizb ut-Tahrir is banned any recruiting drives and leaflet distribution can be stopped immediately, and punishments implemented.

The conclusive argument is this: A ban on Hizb ut-Tahrir would constitute a signal to all that Denmark neither tolerates parallel societies with their own rules, nor silently accepts exhortations to violence and murder. A signal that the limits to freedom of expression have been exceeded when a party is allowed to encourage the killing of other people. Islamists should not be met with dialogue — they should be met with refusals and bans.

11 thoughts on “Resisting the Khilafah State”