A couple of days ago it seemed all but impossible that Geert Wilders would be acquitted of the hate speech charges against him. But the presentation of the witness testimony seems to have caused a shift in the wind.

Our Flemish correspondent has translated the latest from Elsevier. He includes this note:

It seems the quite convincing witness reports by Hans Jansen, Simon Admiraal, and Wafa Sultan, as read out in court, have made the plaintiffs nervous. Now they are openly worried that Wilders may actually be acquitted. 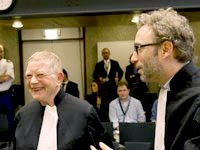 [October 8] Ties Prakken, lawyer for the plaintiffs in the trial against the PVV leader Geert Wilders, believes that the Public Ministry [OM] has kept “the most offensive, damaging” expressions by Wilders out of the charge.

According to the lawyer, Wilders has called for racial violence, as she said on the Dutch TV news-program “Nieuwsuur”. This concerns, for example, a quotation from Wilders from 2007, in which he has said there is “a struggle going on and we must defend ourselves.”

Ties Prakken and her colleague Michiel Pestman wrote a letter to the OM on Thursday, in which they asked that the charge be sharpened. The prosecution has announced that it will not comply with this request.

According to Ties Prakken, the Amsterdam court should have instructed the OM to charge Wilders for inciting hatred and insulting a group, and the OM itself was actually reluctant to prosecute. Ties Prakken finds that the OM is conducting this trial ‘with inappropriate reluctance’.

As a result, the OM themselves had not called witnesses nor asked Wilders questions. For that matter, the latter is invoking his right to silence.

According to the lawyers for the plaintiffs, there is a real possibility that the OM will require acquittal for Wilders. Tuesday, October 12, the Public Prosecutor will formulate a sentence. The prosecution has previously made known that an acquittal is a possibility.

15 thoughts on “Will Geert Wilders Be Acquitted?”