The blogs have been so full of the Geert Wilders trial that the political news about Sweden has been pushed into the background. But not within Sweden itself: the controversy over the election of Sverigedemokraterna (Sweden Democrat) MPs to Parliament continues. The Swedish state media continue to promote outrage against the “racists” and “xenophobes” of SD, and the leftists have vowed to intimidate and harass the new MPs until they leave office.

Our Swedish correspondent LN has translated an article from Aftonbladet about an anti-Sverigedemokraterna demonstration that took place Monday in Stockholm: 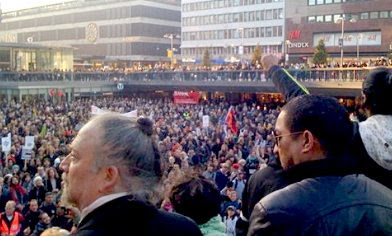 Thousands of people gathered at the Sergel square in Stockholm to protest against racism.

Thousands of people gathered today [Oct. 4] at Sergel Square in central Stockholm to protest against racism. The crowd sang songs that included “Out with Jimmie”, directed against the Sweden Democrats’ party leader Jimmie Åkesson.

The crowd marched to the Riksdag [Parliament].

The protests were linked to the opening of Riksdag, where the Sweden Democrats have taken seats for the first time.

“The Sweden Democrats are a cowardly party that beats the body politic down instead of raising it up. It is incomprehensible that we now have a party in parliament that has no respect for human rights,” said the Left Party’s Lars Ohly, who made speeches about racism.

Sergel Square quickly filled with thousands of people who wanted to show their opposition to racism.

“It is full, the entire square. The atmosphere is good, and there is much applause and chanting. Among other things, ‘Out with Jimmie, sha-la-la-la-la’,” said Aftonbladet reporter Olof Jönsson from the scene at 6pm.

At half past six in the evening the whole crowd began to march along Harbour Street through Coin Square to the parliament.

At the front, Lars Ohly and those around him waved red flags.

Shortly after 7pm, the whole of Coin Square over to the parliament building full of people who chanted and sang.

“It is a success. Fantastic that so many could come here and show their displeasure,” one of the organizers told Aftonbladet.

Eggs at the police

The demonstration on the whole went very well. The only fly in the ointment was when some people suddenly started throwing eggs at officers.

“The police officers took cover behind one of the cars, but then they came out again,” said Olof Jönsson.

After that, police officers started wearing helmets. Egg throwing did not lead to a fight.

Behind the campaign were, among others, September Alliance and Facebook groups against racism.

Similar demonstrations were held today in several cities around the country.