Our Flemish correspondent VH reports that Geert Wilders’ public appearance in Berlin yesterday was under strict surveillance by the German government.

“Obviously the ruling Bolsheviks in the [German] capital gave the police chief Dieter Glietsch the command to send a sniffer from the state to the speech by Geert Wilders. The sniffer’s task was to immediately terminate the event if it became too much for the Islamophile Attorney.” [source]

VH includes this photo of the same Dieter Glietsch escaping a left-wing mob at a May 1 demonstration (see Note #2 at the bottom of the post): 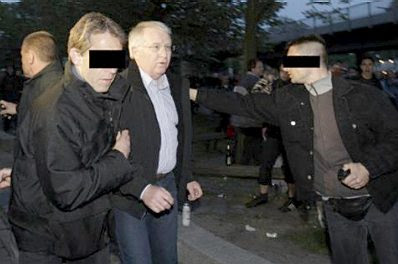 Below is VH’s translation of an article from Der Tagesspiegel, followed by his notes:

Outsiders amongst one another

Major security effort at appearance of Right wing populists. The police lent an ear — and threatened with termination of the speech.

Major security arrangements for a controversial visitor: Already on Saturday morning the Hotel Berlin was blocked off with fences. The Dutch right-wing politician and Islam enemy Geert Wilders arrived even earlier, so that the demonstrators on Lützowplatz would not get to see him. With a vehicle from the Dutch Embassy and armored limousines from the state law-enforcement office, the politician was picked up from the airport. In front of the hotel in Berlin-Tiergarten about 250 police officers had no problems keeping Wilders’ opponents at bay. Only one hundred people protested against the appearance of the Dutchman. Everything remained peaceful.

More interesting than the protests outside the hotel[1] for the Berlin police was whether Wilders in his speech before 540 guests would remain within the limits of freedom of expression — or whether he would exceed these limits. To that end, the police legal adviser was present in the hotel. And on Friday Police chief Dieter Glietsch, [2], in a letter to the organizer, the former CDU delegate Rene Stadtkewitz, demanded that he “moderate” Geert Wilders so that he would not violate German law. In the letter Stadtkewitz was threatened that the police would if necessary terminate the event.

“We will not tolerate incitement of the people,” the juridical advisor to the police, Oliver Tölle, said. Because the speech was to be broadcast live on the Internet, it would be public. Thus also “the peace” would be disturbed, they said.

In contrast, the organizers were clearly of the opinion that the appearance by Wilders, months in preparation, was a private event. In any event they defended their decision to exclude representatives ofDer Tagesspiegel. The newspaper would be a “security risk”, Stadtkewitz announced shortly before the event, because the location of the venue — the Hotel Berlin, up till the last minute kept secret — had become known earlier due to their reporting. According to the organizers, this had made additional security measures necessary and due to that, Der Tagesspiegel had “discredited” themselves.

Already half an hour before the start, the guests, who paid the €15 entry fee [towards covering the security costs] were standing patiently in line in the foyer of the hotel. Everyone received an arm-bracelet; private security forces subjected all visitors to a physical examination similar to one at the airport. A visitor praised the high security and also the significant police presence outside the hotel. “They really did a good job.” Old and young came to listen to Wilders. One in a suit, another in jeans and colorful cap. The demonstrators chanted outside the hotel, “No platform for racists.” Their banners read: “Wilders shames the Netherlands”. Sevim Dagdelen, MP of DieLinke [the Left Party, successors of the leading DDR party SED (Socialist Unity Party of Germany)] said at the rally that it was a scandal that the Hotel Berlin had not said ‘no’ to this event. “The hotel thereby drags the entire city into the dirt.”[3] Right-wing populist developments such as in the Netherlands should not be allowed, demanded the alliance “Stopping Right-wing populism”, which organized the protest.

Before the event got started at 2pm, the organizer Stadtkewitz told journalists that Islam “is not compatible with our social order”. Problems are mainly with Muslim immigrants. The former CDU politician and founder of the “party for more freedom and democracy” [Die Freiheit] stressed he held many parallels to the views of Wilders. The guest from the Netherlands once again made it clear that he supports the activities of Die Freiheit, which was founded in Berlin. Also, Germany has the need of a movement that “defends the country’s national identity” and the “opposes Islamization”, as Wilders said in his speech, which was listened to on the internet by about 1500 interested people.

The 540 invited guests, who according to the organizers had come from all over Germany, thanked him with applause and cheers. Clearly Wilders also brought supporters with him from his own country. Directly in front of the hotel was a large coach from the Netherlands. In his homeland, the right-wing populist has to stand trial on suspicion of sedition. On Monday in the Hague the trial will begin. […]

“Wilders is not welcome in Berlin, the SPD Bundestag member Mechthild Rawert had said. Additionally, the Berlin politician suggested to tacitly block the performance in the Hotel Berlin.

5 thoughts on “Keeping Tabs on Geert”