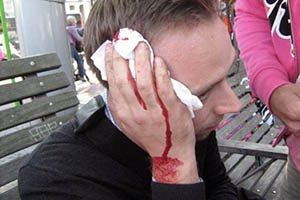 Growing violence against gays in the Netherlands prompted gay rights organizations to mount a demonstration in Amsterdam yesterday. It is a well-known fact — although not always a publicly-acknowledged one — that most of the anti-gay violence comes from Muslim immigrants or their Dutch-born descendents.

Our Flemish correspondent VH has compiled a report about yesterday’s incidents based on Dutch-language sources. He includes this explanatory note:

The protest was a response to the continuing wave of anti-gay violence in Amsterdam. In recent weeks, gay and lesbians were abused on the Zeedijk, in the Reguliersdwarsstraat and the Muiderpoort-Station. [source] 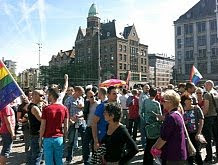 AMSTERDAM — A demonstration of two thousand gay and lesbians against anti-gay violence Sunday was ruined by a series of incidents. In one of them a demonstrator[1] was injured at the hands of two women of 18 and 19 years. Afterwards the demonstrator reported the perpetrators to the police. They were both subsequently detained, but set free on Monday.

The two women wanted to get through a group of demonstrators on the Westermarkt with their bikes, shortly after the march had ended. When the man said something about it, they shouted insulting remarks at him. This resulted in a fight in which the man was hit by the two women. When one of the woman hit him with a bag, he was wounded in the head. The man and bystanders managed to hold the girls until the police arrived.

[Note: Shortly after the demonstration against anti-gay violence a boy was beaten up by two Moroccan girls. This was reported by eyewitnesses who were present. (source) — VH]

But there were more incidents. On Monday, the reports poured in to a gay-rights organization, the foundation “Right to Feel Safe”, as spokesman Fya Hopelezz said.

For example, there were boys on scooters [see article below; these may have been Moroccans] who repeatedly drove onto the protesters. A group of lesbians was threatened, verbally abused and pelted with beer cans [see also the article below], and several fights had to be calmed down.

“This makes me very sad. It shows how rock-hard the situation is now in Amsterdam,” says Hopelezz. “The anger sits deep in the gay community. Anger over the violence, but also because everyone keeps saying that anti-gay violence is not that bad within the city.”

More reports of violence during demonstration 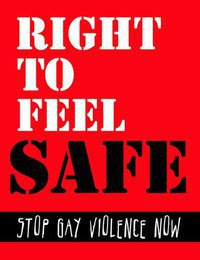 According to the organizer “Right to Feel Safe”, yesterday’s violence — during and after the demonstration — was not confined to a single homophobic incident.

Yesterday Gay.nl reported that a boy was beaten up by two girls. Today “Right to Feel Safe” has issued a press release stating that more than that happened.

During the demonstration, two boys drove into the crowd several times with their scooter, “and on purpose flew narrowly past Dolly Bellefleur, who is beloved by the gay community,” writes Right to Feel Safe. Furthermore, a group of lesbians were hit by beer cans that were thrown at their heads, and Right to Feel Safe this morning received four additional reports of verbal abuse and threats.

According to Right to Feel Safe, this represents the ninth reported anti-gay incident in four months. The action group has announced that it will continue to demonstrate as long as there is an increase in incidents. Fya Hopelezz of Right to Feel Safe says: “The incidents during the protest once again show how serious the situation is.”

The politician Ahmed Marcouch [PvdA MP, Labour Party, Socialists], who was present, twittered yesterday that his impression was “that the police had a minimal presence”. According to Marcouch, this was a sign that “our administrators are not yet deeply aware of the seriousness of hate against gays”.

11 thoughts on “Violence Against Gays in Amsterdam”