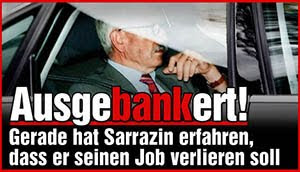 As expected, Thilo Sarrazin has been fired from his position on the board of the Bundesbank, due to his politically incorrect opinions about Muslim immigrants in Germany.

Our Flemish correspondent VH has translated the report from BILD.

Sarrazin has just learned he will lose his job.

[It seems that among Germans, a third support Sarrazin, with a potential extra up to 25%]

To the vast majority of [newspaper] BILD readers, Sarrazin’s thesis should not be a causal factor in his dismissal. In a quick poll, 89 percent of the approximately 130,000 participants are of the opinion that he wrote the book as a private citizen and it has nothing to do with his office.

Even more: About 90 percent of the readers even want Sarrazin as Chancellor, on the precondition he founds his own party. They are of the opinion that he is the only politician who looks to the people “straight in the face” and expresses what the German people think.

Different result were obtained in a representative survey by YouGov on behalf of BILD: 42 percent say that Sarrazin is no longer acceptable for the Bundesbank, 34 percent think the opposite, 25 percent have no opinion.

3 thoughts on “The Bundesbank Gives Sarrazin the Boot”