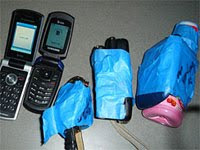 The office of the public prosecutor in the Netherlands reports that it has released the two Yemenis who conducted a “dry run” terrorist attack on a flight from Chicago to Amsterdam. Despite a blithe official assurance that the men are no longer considered suspects, a number of troubling issues have been left uninvestigated and unresolved.

Our Flemish correspondent VH has translated the public announcement, and follows it with his own commentary and analysis:

The two Yemeni men who had been detained since Monday on the suspicion of possible involvement in the preparation of a terrorist crime, were released tonight [afternoon, September 1]. Both men were arrested after the American authorities had informed the Netherlands on the fact that suspect goods were found in the luggage of one of them. This luggage was intercepted by the American authorities and remained in the U.S. In a preliminary test in America in addition to this, a possible presence of a trace of explosives was determined on an item of the luggage goods. However, both men were at that time already were en route to Schiphol airport, in transit to their destination Sanaa (Yemen).

The information provided to the Dutch authorities was so serious that it was decided not to take any chances. Following this, the men were questioned and then arrested. Also their luggage was then confiscated. There subsequently has been intensive research in the U.S. and the Netherlands, in which very close consultations took place between the police and judiciary in both countries. During this investigation, the luggage in the U.S. has been examined further, several addresses have been searched, and people have been interviewed. Furthermore, in the Netherlands the hand luggage was examined, traces secured in the aircraft, and the suspects extensively questioned.

Since there have been no indications found to support the initial suspicion, there is no reason for holding the men any longer, and they are no longer considered suspects.

The two were allowed to board at O’Hare airport in Chicago, despite the security already had concerns over Ahmed Mohamed Nasser al-Soofi (48). When it appeared the man was on a different flight from his luggage, this caused alarm. The flight with his luggage on board had to turn back, so that these could be taken off the plane. [source] 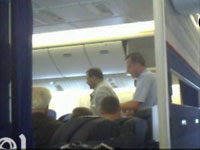 Later, the two freely boarded a flight to another airport [flight UA 908 to Amsterdam], where they were arrested [at arrival, according to Het Parool: “at row 25 a younger man (Hezam al-Murisi, 37) and one older man (Ahmed Mohamed Nasser al-Soofi, 48) were handcuffed and taken away,” which indicates they may well have been seated close or next to each other]. “If it is true that the luggage left without a passenger, something has gone wrong. That is not allowed according to the international rules,” safety expert Edwin Bakker of the Clingendael Institute said. “This does not look good. This should be well looked into.” Also sources among the Dutch authorities consider it somewhat troubling that their American counterparts seem to have acted in such a manner. They question the security operation in the United States. “A flight may never leave the gate when the owner of the baggage is not on board. Something did not go well there.” [source]

One of the two men arrested at Schiphol [Hezam al-Murisi] was not only suspected of preparing terrorist attacks but also of arson. His lawyer Klaas-Arjen Krikke confirmed this Tuesday. [source]

“…Tuesday evening however, it slowly became clear that American intelligence no longer had suspicion any against the men. For example, they did not even know each other and one of them had missed his flight. This was the reason that he was not in the same aircraft as his luggage.” [source]

The two Yemenis who were released Wednesday after they had been detained since Monday on suspicion of terrorism, have been greatly damaged. This is the conclusion of Klaas-Arjen Krikke, the lawyer for one of the two [Hezam al-Murisi]. “They have been put down world wide by name as terrorists. […] But my client is very happy that he has been released,” says Krikke. “He hopes soon to be with his family again. But what has happened here will not win the beauty prize. In particular, the Americans are responsible for that. Scandalous! […] My client seemed to have nothing to do with the suspected suitcase. That was absolutely clear. Yet he became involved with the whole mess,” the Dutch lawyer stressed. “I must say however, that the prosecution and the police in recent days have worked very hard to clarify the matter quickly. But the Public Prosecutor (OM) has had the courage to weigh the information honestly and then release the suspects.”

The two men will continue their trip to Yemen on Thursday (September 2). [source]

This article was published earlier today at Big Peace.