Yunus Effendi Habibie, the Indonesian ambassador to the Netherlands, caused a bit of a kerfuffle recently when he indicated that voters who preferred Geert Wilders’ party might in fact be psychotic. He and the government he represents have taken offense in the last few months over the less than complimentary things Mr. Wilders has said about Islam.

The PVV responded by demanding that the Foreign Ministry have a little talk with the ambassador to set him straight. Since the proposed new government is dependent on the support of the PVV in its formation, the ministry complied surprisingly quickly with Mr. Wilders’ demand.

Our Flemish correspondent VH has translated a series of five articles, beginning with the original interview with Ambassador Habibie published in Het Financieele Dagblad:

Indonesian Ambassador: “I do not want my president to be put down as a clown here” 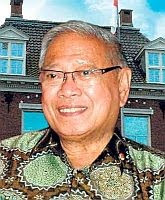 Indonesian President Susilo Bambang Yudhoyono will pay a state visit to the Netherlands from October 6 to 9, 2010. “Relations are super-smooth, but the circumstances are not that pretty,” the Indonesian ambassador Yunus Effendi Habibie [brother of former President of Indonesia (1998-99) Bacharuddin Jusuf Habibie] said.

Would the possible support of the PVV for a new cabinet stand in the way of a visit by the Indonesian President?

“The president had already promised to visit the Netherlands, before it was clear what [coalition] government was being formed. He is ‘a man a man, a word a word’. But the circumstances are not that nice. If Mr. Wilders had become part of a new government, the upcoming state visit might have been very doubtful. The president of course will not come over when there is someone in the government here [the Netherlands] who calls the Islam backward. I do not want my president to be put down as a clown here.

Will the support of the PVV for a Dutch [coalition] government influence the relations with Indonesia?

“I see no reason why we cannot cooperate, unless the Dutch Government implements an anti-Islamic policy. If Mr. Wilders remains outside the government, he may shout whatever he wants. As long as he stays barking outside the cabinet. Why would we mess up our relations because of this one man? Incidentally, I observe hate speech in his words. Moreover, my uncle, was repeatedly thrown into jail by the Dutch because of sowing hatred against the Dutch colonizer, but put that to the side.

If you offend someone, you ask for a response. If Mr. Wilders calls Islam barbaric and backward, maybe he has to learn more about Islam. That in Baghdad there was already a medical school when here in the Netherlands there were still only quacks wandering around. I will not lecture him, as long as he doesn’t have influence on Dutch policy.“

Does the growing influence of the Party for Freedom already have an effect on bilateral relations?

“Relations are being disturbed by the presence of Mr. Wilders. I’m annoyed with what he says. It distorts economic and political relations. I’ve always argued for the Netherlands in Jakarta, but that becomes ever more difficult. We will and should not interfere in the internal Dutch affairs, but of course we do follow the developments closely. If Mr. Wilders forces the government to implement his ideas, our relationship will be put under pressure. When government policy leads to insulting Islam, then we have a problem. If Indonesians cannot come to the Netherlands because Indonesia is an Islamic country, we have a problem. Indonesia however, will never become an Islamic state, even though 85% of our population is Muslim. The Pancasila [the philosophical foundation of the Indonesian state, that was actually formed by the Dutch from a variety of islands — translator] guarantees equal rights and equal responsibilities for all.”

What conclusion do you draw from the growing popularity of Geert Wilders and the PVV?

“It is a fact that many people voted for Mr. Wilders. When people want to listen to him, that’s their good right. Maybe they suffer from a fear psychosis. But they will have to realize that the hegemony is not of the Christians. The world is getting ever smaller and we are sitting closer and closer to one another. Islam is a religion of peace and tolerance. There are radicals and terrorists in all religions. You may not judge more than a billion people based on a thousand or so extremists. When you suffer from criminal Moroccans, just pick them up. Those aren’t good Muslims. They blacken our name. Ultimately, I believe the Dutch people know what’s good for them. We will continue to build on our relationship in good faith, but I don’t think my president wants to meet Mr. Wilders. “

Why does the state visit takes place at this time?

“The last obstacle to our relations was removed when the Dutch foreign minister Bernard Bot came over to Jakarta in 2005 and accepted our Independence Day, August 17, 1945. We never asked for that recognition, but it was always a psychological barrier that hindered our relationship. Since then our relations are super-smooth, and we can go hand-in-hand towards the future. Actually, the president wanted to visit the Netherlands sooner, but could not do this because Garuda [Indonesian airline] was banned from flying to Europe six years ago by the European Commission. He of course will not go [to the Netherlands] on KLM or Singapore Airlines. No way. The Netherlands then helped us greatly with solving the shortcomings of Garuda. The [Dutch] Ministry of Transport sent experts to Jakarta. Since June there have been daily flights again between Jakarta and Amsterdam.”

Will this state visit further improve the ties between Indonesia and the Netherlands?

“The president will sign a comprehensive partnership. With that our relations will be underlined and legalized. This should further facilitate political and business relationships. It lays the foundation for all kinds of agreements such as a treaty to eliminate double taxation. We want to expand our current position and make use of the Netherlands as our gateway to Europe.”

Wilders wants Verhagen to have a talk with ambassador

PVV leader Geert Wilders wants the Indonesian ambassador to be “have his ears cropped diplomatically” if he expressed himself in a negative way about the PVV and its electorate on behalf of his own government. “We cannot let this pass,” Wilders said Thursday.

Earlier in the day Wilders demanded that Verhagen [outgoing Foreign Minister] act against the ambassador. Verhagen should summon the ambassador and denounce him, following his “offensive statements” in his interview, Wilders said.

Questions from members [of Parliament] Wilders and Kortenoeven (both PVV) to the Minister of Foreign Affairs [Verhagen] about the outrageous statements by the Indonesian ambassador concerning PVV leader Geert Wilders and the Dutch electorate that voted for the PVV.

Verhagen wants to consult with ambassador over statements about Wilders

Outgoing Foreign Minister Maxime Verhagen (CDA) wants a talk with the Indonesian Ambassador, Yunus Effendi Habibie. The ambassador said among other things that the people who voted for the PVV live with a fear psychosis.

“The ambassador of Indonesia, in a country where freedom of expression is of paramount importance, is free to say what ever he wants,” Verhagen says. But he finds that the descriptions Habibie uses for the PVV electorate are not wise. On Thursday Verhagen will immediately contact the Indonesian representative.

THE HAGUE — The Indonesian Ambassador Junus Effendi Habibie has made known in a conversation with a senior official of foreign affairs that he should not have spoken in such terms about the PVV electorate. A spokesperson for the department in The Hague made this known on Thursday.

In an interview with Het Financieele Dagblad [see interview above] the ambassador of Indonesia said among other things that “Wilders’ voters may suffer from a fear psychosis.” Habibie realizes that it would been better if he had not spoken in these terms about the PVV electorate, Foreign Affairs said.

The senior official replaced outgoing Minister Maxime Verhagen (Foreign Affairs), who is busy with the formation [of a government with the VVD and supported by the PVV]. Verhagen had already stated that he found it “not wise” that the ambassador had expressed himself this way about the electorate of the PVV. The interview aroused the anger of PVV leader Geert Wilders, who insisted that Verhagen must summon the ambassador [and so he did].

In the conversation it also became clear that Habibie and Verhagen agree that the ambassador “is completely free to make clear the concerns of Indonesia about the picture that the PVV sketches of Islam.”

5 thoughts on “Clowns and Psychotics”