Our Norwegian correspondent Zylark sends a report about a recent enricher vs. enricher conflict over the wearing of hijab. Below is his translation from today’s Dagbladet: 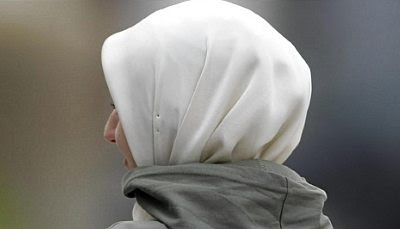 Photo caption: “Hijab conflict: Two Islamic families argue over the use of hijab in Drammen [city outside of Oslo]”

During recent weeks the police in Drammen have been dispatched twice after arguments between two Muslim families over the use of hijab.

A Kurdish-Iranian and an Iraqi family are neighbors in a municipal housing, but can’t stand living next door to each other because of a disagreement over the use and non-use of hijab, writes Drammens-Tidende. [The original article in Drammens-Tidende reveals that the Kurds are Shia, and the Iraqis are Sunni, which I am sure does not quite ease the tensions between the two families. — translator]

In the Kurdish family from Iran the daughters do not wear hijab. In the Iraqi family the daughters always wear hijab whenever they are outside of the house. The issue has led to many arguments, and several times resulted in physical fights [translator’s note: Norwegian; håndgemeng, “low-level violence”, such as pushing, slapping, wrestling, etc.] between the two families.

Want to decide for themselves

“I must be able to decide for my own family, without others telling me what is right or wrong,” says the Kurdish-Iranian mother to Drammens-Tidende.

The last time violence [translator’s note: again the Norwegian håndgemeng is used] occurred, one of the children was sent to the emergency room with minor injuries. The police confirm that the incident centered around disagreement between the families on the use or non-use of hijab.

Iraqi family members deny that their attitude is condemnatory towards the neighbor family.

“We do not care that they do not use hijab. We are equal human beings still,” says the Iraqi mother.

Both families have been in contact with the municipality and the police to get help, and both wish either to move, or that the other family should vacate the building. (NTB — Norwegian Telegram Bureau)

I tend to mistrust the family that practices Islam more strictly, in this case the Iraqi family. They force their own daughters to wear the hijab, and I am pretty certain they rail on the more secular Kurdish-Iranian family, because the Iraqi daughters might just have asked daddy dearest why they must wear a hijab, whilst their less strict Muslim neighbors don’t force their daughters to wear that little sign of subjugation.

It is hardly surprising that the Iraqi mother then proceeds to lie through her teeth to the Norwegian press about how much this bothers her. All Muslim fundies practice this taqqiya. Say one thing amongst themselves, say what the infidels want to hear to the outside world.

That the Kurdish-Iranian family is the more secular does not surprise me. In my experience most Iranians, whether Persian or Kurdish in origin, tend to be rather vaccinated against allowing religious thuggery. Perhaps they’ve had one or two bad experiences with the morality-police in Iran, and did not fancy it that much. Something our own politicians and authorities might lend an ear to before crawling to bed with the vilest of the vile Islamic sharia-practicing and -promoting elements of the Muslim communities here in the West — and elsewhere.

7 thoughts on “Fighting Over the Veil”