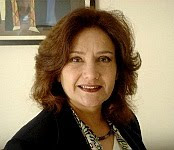 Nonie Darwish is an apostate from Islam and the director of Former Muslims United. Last fall she and FMU initiated the Freedom Pledge project, whereby prominent American Muslim leaders were asked to demonstrate their avowed commitment to religious liberty, including the right to leave Islam.

The response from the imams was, not surprisingly, silence. In particular, Imam Feisal Abdul Rauf, the man behind the Ground Zero mosque, was unwilling to sign the Freedom Pledge.

Former Muslims United issued this press release yesterday about the silence of the imam:

“Overwhelmingly, Imam Feisal Abdul Rauf and his wife Daisy Khan of the controversial Cordoba House ‘ground zero Mosque’ located in lower Manhattan do not honor freedom to choose one’s beliefs as guaranteed under our First Amendment. That is the only conclusion we can draw from the overwhelming ‘silence’ and non-response to letters containing a Freedom Pledge sent on October 20, 2009 to Imam Rauf and Daisy Khan of the American Society for Muslim Advancement by our organization”, according to author and human rights activist Nonie Darwish. She is executive director of Former Muslims United (FMU).

FMU is a human and civil rights organization whose mission is to protect and defend those who have chosen to leave Islam and face threats to their lives and property under Fatwas or rulings from Muslim clerics and legal authorities both here in the United States and abroad.

Darwish said, “The objective of letters sent by FMU was to request that ICM Mosque leaders sign a pledge to honor the freedom of former Muslims to choose a personal belief other than Islam. We are dismayed. We call upon Imam Rauf and his wife Daisy Khan, who consider themselves law abiding citizens of this country to reconsider their positions and sign the Freedom Pledge”. This failure over the past nine months to sign the FMU Freedom pledge flies in the face of recent comments by Ms. Khan at a recent July 6th Chautauqua conference, where she said: “The Quran speaks of humankind as one nation under God. We find that in America,” she said. “The Quran speaks of one creator and the founding document says that everyone is endowed by the creator with inalienable rights.”

Khan, along with her husband and the American Society for Muslim Advancement is planning to build the Cordoba House in New York City. The location is two blocks away from Ground Zero.

During the question and answer portion, Khan was asked if the location of the Cordoba House could be seen as a victory of the Muslim radicals infiltrating America. “It is a defeat to the extremists,” she answered, “because Cordoba House will celebrate the very ideology that the extremists detest, which is the ideology of inclusiveness, pluralism, and coexistence between faiths”.

The threats to former Muslims’ human rights have been acknowledged by the US Department of Justice (USDOJ). Assistant U.S. Attorney General Thomas E. Perez of the Civil Rights Division sent a letter to Darwish naming Mr. Eric Treene of his staff to investigate, “incidents of persons facing religion-based discrimination or violence or threats.” FMU has established a relationship with USDOJ and filed such threats made against former Muslims.

FMU has submitted cases of threats and discrimination to the Civil Rights Division of the USDOJ and has assisted in several individual cases of former Muslims seeking help. FMU issued a proposal earlier this year to the Islamic Society of North America (ISNA) to conduct a parallel session on “Civil Rights, Social Justice, and the Rights of Former Muslims to Religious Freedom and Freedom of Speech in America” at the recently concluded ISNA Annual Convention held in Rosemount, Illinois, July 2-5, 2010. That request was rejected by the ISNA, a leading American Muslim group which was cited as an unindicted co-conspirator in the Dallas Federal Holy Land Foundation Trial.

In the fall of 2009, FMU mailed copies of the “Freedom Pledge”, asking Imam Rauf, Ms. Khan and other Muslim leaders to repudiate the Shariah law consensus permitting execution of apostates from Islam, to more than 111 Muslim American leaders of 50 organizations. Only two pledges were returned — one from Dr. M. Zuhdi Jasser of the American Forum for Islam and Democracy and the other from Dr. Ali Ayami, executive director of the Washington, DC-based Center for Human Rights and Democracy in Saudi Arabia. To date, FMU has sent over 163 Freedom Pledge Letters to Muslim leader across America.

One thought on “The Silence of the Imam”