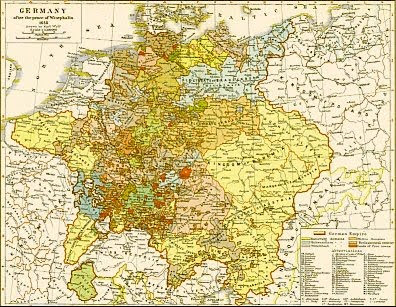 The following book review by Srdja Trifkovic, which appeared originally in the print edition of Chronicles, is republished here with the author’s kind permission.

The Path to Modernity
by Srdja Trifkovic

The Hobbesian mayhem that struck Europe in the first half of the 17th century was not an event, or a series of events, befitting the designation of a war. The plural form, as in the Napoleonic Wars, would be more apt. It was a pancontinental minus-sum-game involving all major players (save Russia) that continued, relentlessly, long after its early instigators and participants were dead. The conflict was not a Clausewitzian “continuation of politics by other means”; it was a substitution of politics by the torch and the sword.

Peter H. Wilson’s detailed narrative shows the Thirty Years War as absurd, not only morally but technically. Rational players, he contends, could have wrapped it up well before Sweden joined the fray, yet the balance between ends and means in the decisionmaking calculus—tenuous to start with—was lost to fear, pride, blood lust, va-banque adventurism, fanaticism, and numbing inertia well before the war entered its most destructive phase in the 1630’s. These sentiments are present in varying degrees in all wars. In Europe between 1618 and 1648, they were dominant.

After a striking opening that covers the Defenestration of Prague, Wilson takes the reader through 100 years and 266 pages of events — the Reformation, the emergence of confessional power politics, the complex late-16th-century European chessboard — that provide the backdrop to the main story. His ensuing account of who did what to whom, and why, is dryly authoritative (endnotes take 70 pages of small font) and likely to remain a definitive history of the war for decades to come. The book is not a joy to read, however. That the narrative is sometimes hard to follow is partly owing to the complexity of the material. When the author errs, it is on the side of excessive detail. The following passage illustrates the problem:

Two-thirds of La Valette’s army deserted as supply arrangements broke down. As it became obvious the Hessians would not cooperate, the cardinal retreated precipitously to Metz in September. Gronsfeld crossed with 6,500 Bavarian troops to join Gallas in pushing south from Saarbrücken into Lorraine. This struck clearly at French interests, but was intended to restore the situation there prior to the French invasion of 1632, not to attack France itself. Duke Charles had launched his third attempt that year to recover his duchy, striking across Alsace from Breisach at the end of June with the help of two Bavarian cavalry regiments. His second sister, Henriette of Pfalzburg, accompanied the troops in male attire and participated in the fighting.

The above is but one half of a single paragraph, and the bit about Henriette is neither a footnote nor in parentheses. There are too many names of people and places in Wilson’s book, most of them making a single cameo appearance. (In history, as in design, less can be more.)

In the last two chapters, however, Wilson comes into his own as a world-class historian. His final 80 pages provide a bold but not flamboyant revisionist finale. Most importantly, he downplays the religious dimension of the conflict. Although religious tension contributed to the outbreak of the war, the link was far from straightforward:
– – – – – – – – –

All Christian confessions sprang from common roots, but developed a momentum of their own due to vested material interests, social concerns for status and prestige, and the psychological need to belong and to define that belonging by distancing oneself from those holding different views.

Eastern Central Europeans, on the other hand, realized that confessional disputes impaired their ability to fight the Ottomans who represented a threat to all Christians. Among the upper crust the common veneration of classical forms helped raise the exchange of ideas above sectarianism, and even during the war Ferdinand chose Protestants as imperial poets laureate.

Confessional rights, claims, and grievances, intertwined with constitutional disputes, were significant in the overall mix of motives and justifications for action, but they were not nearly significant enough, Wilson contends, to validate the old view that the period 1618-48 was an extension of the wars of religion of the previous century. During the Thirty Years War, France was an ally of Lutheran Sweden and Calvinist Holland against Catolicissima Spain and against the Catholic emperor, up to one third of whose soldiers were Protestants. Sweden fought her coreligionist Denmark, while Saxony, Brandenburg, and others changed sides during the conflict. Protestant Scots served in the French, Polish, and Imperial armies; many Scots and Irish Catholics fought for Sweden, Denmark, and Holland; and many men converted to the faith of their current employer. All of them ignored Pope Urban VIII, a cynical Barberini “compromised by his own opportunism” and jealous of the Habsburg power in Spain and the empire alike.

The Thirty Years War became infamous for its all-pervasive violence and unremitting destruction even before it was over. British readers, Wilson relates, were informed by such publications as Dr. Vincent’s illustrated Lamentations of Germany (1638), showing murder, mutilation, and mayhem in graphic detail: “All parties in the subsequent British Civil Wars struggled to avoid their conflict descending into the depravity they believed afflicted Germany.” A century and a half later, Schiller and other German Romantics, obsessed with death, destruction, and the loss of identity, merged the collective memory of plunder, mass murder, and plague with a sense of blameless German victimhood and of merciless foreign savagery, with the promise of eventual redemption through the rise of a new, stronger German nation from the ashes. It was a powerful and dangerous mix, with lasting significance for the Germans and for the rest of Europe.

As Wilson shows, however, the destruction was uneven across time and spaces, allowing some regions to recuperate as others were being ravaged. The lasting devastation caused by the Swedes along the Elbe, Rhine, and Main valleys, and by the Imperialists and their allies in the Protestant areas after Nördlingen, was unprecedented but, mercifully, not universal. The demographic and economic recovery was vigorous, even if uneven. Wilson concludes that an accurate assessment of the war’s human and material cost is impossible, but that a 15-20 percent population decline in the affected areas is more realistic than the old claim of 33 percent or more that had been long accepted as fact. Nonetheless, “Even a 15 percent decline would make the Thirty Years War the most destructive conflict in European history.” By comparison, the Soviet Union, which suffered the heaviest casualties of World War II, lost less than 12 percent of its inhabitants, while, in Europe as a whole, 34 million dead accounted for no more than 6 percent of its pre-war population.

The scale of lethal violence perpetrated by soldiers against civilians is also questioned by Wilson. Beatings, plunder, and intimidation were common enough, but documented murder and rape were less widespread than has generally been believed. The Saxon town of Naumburg lost more than half of its 8,900 inhabitants between 1618 and 1645, yet only 18 were listed as killed by soldiers, despite the place having been sacked and plundered for a week by the Swedes in 1635. For soldier and civilian alike, disease combined with poor nourishment, displacement, and atrocious hygiene proved more potent than muskets, sword, and cannon. In the ranks, Wilson estimates, “three men died of disease for every one killed in action, suggesting that up to 1.8 million soldiers died during the war.” It is very likely, he contends, that many of the people who died in the empire between 1618 and 1648 would have had their lives cut short by plague, typhus, and cholera even without the war, but troop movements, plunder, and dislocation clearly made things much worse.

Wilson’s conclusions regarding the war’s economic, social, political, administrative, cultural, and artistic impact are original, often striking. He traces the phenomenon of 17th-century inflation and explains that it would have hit Europe even without the mayhem. He disposes of the German and Czech nationalist myths, mutually hostile yet equally insistent that the conflict destroyed vibrant pre-war cultures and led to alien domination.. En passant, Wilson demolishes the German claim, post-Versailles, that the loss of Pomerania to Sweden denied Germany an opportunity to become a colonial power until the 1880’s and thus contributed to her sense of encirclement, which led to the tragedy of 1914.

The resilience of the municipal and provincial structures in the German-speaking lands was impressive. Though in acute crisis, Wilson says, territorial rule did not collapse, and administrators adapted under seemingly impossible conditions. The result was a process of managerial secular rationalization inherent in state development and the concurrent weakening of the power of princely and ecclesiastical elites. The war forced contemporaries to confront a question central to early modern life (the relative roles of God and people in shaping events), and the answers were detrimental to the attempts, after 1648, to reestablish the old order. Wilson is careful to stress that mid-17th-century European rulers were not conscious state-builders. Nevertheless, by providing a new charter for European relations, the Peace of Westphalia paved the way to absolutism, to the centralized monopoly of legitimate violence, to the secularization of politics and society, to the global system of sovereign states as primary international actors, and, thus, to modernization.

Srdja Trifkovic is the author, most recently, of The Krajina Chronicle.

2 thoughts on “The Path to Modernity”