Last winter we featured an op-ed by the Danish writer Jeppe Juhl. The author returns with a new essay, which was published in 180grader on July 22. Many thanks to Anne-Kit of Perth, Australia, for translating it into English.

Israel Is the Canary of the West 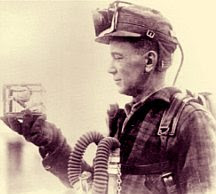 It’s not that long since miners were still using caged canaries as an early warning system for detecting gas leaks. If something happened to the canary it was time to get out quickly. Or into one of the safety pockets that were part of the contingency plan. You wouldn’t even need to have finished primary school to understand that only a really, really stupid (or suicidal) miner would look the other way if his canary suddenly passed out in its cage. And it would be equally remiss of the miner not to care for his canary or not to help it if it should fall ill.

Right now we are witnessing not one but millions of stupid or suicidal “miners”. I am referring to all those in the West who are actively agitating against or directly oppose the State of Israel. For Israel is the “Canary of the West”. The day Israel succumbs is when the days of the West are numbered. There can be no reasonable doubt about this. This does not mean that our civilization will crumble instantly, but the moral collapse which must inevitably have preceded any future dissolution of the Jewish State would have to have been so massive that the West would necessarily be in a state of free fall. And no measures will be able to halt this moral gravitation. We will not be able to rise up again if that small spot which represents Israel is overrun by forces which we all know are evil, even though it is forbidden to say it aloud.

Yes, life will go on. For a little while. But the gas leak has been established. The canary’s death presages our own. If in any way we are dealing with a clash of civilizations, now is the time to occupy the “high ground”. I am not referring to a military confrontation, as this would inevitably lead to only temporary solutions, but to a moral struggle where we in the West proudly and fearlessly fight for the beautiful ideals which the intellectual canary haters benefit from in their own privileged and protected lives, but which they denounce to the world in their eternal quest to appear as “good people”.
– – – – – – – – –
What is the nature of this self-hatred that drives Western intellectuals, especially those in Europe, to combat the canary of the Middle East? What perverse mechanisms compel many Westerners to demand that our canary always be more colourful and sing with a purer voice than any other birds around the world? What makes these intellectuals and their thoughtless followers punish our bird instead of kindly shipping it off to the doctor when it shows signs of illness, which would be the only rational thing to do? Is it perhaps because they no longer perceive themselves as part of our community? Is it maybe because they are not down in the mineshaft with the rest of us but live their danger-free lives at the higher levels, where they can breathe easily and enjoy their expensive vintage wines, while they gaze with pity and condescension upon the swarthy workers down in the mine who day in and day out live their insect-like lives watching the X-Factor and reading Dan Brown? I think this is how it is. The only problem is that these cerebral aristocrats do not understand that they are living on top of the mine. And when the mine collapses, they go down with the rest of us.

If the greatest statesman of the Western world had been alive today, and here I am thinking of course of Winston Churchill, he would have been on the barricades just like he was in the thirties. And Churchill would not have minced his words. He would have denounced the meaningless lunacy of condemning Israel in the wake of the flotilla. An episode which Israel should have avoided but which happened because they naively had not foreseen the evil present on the boat. Instead Catherine Ashton, the so-called Foreign Minister of the EU — a person whom it is safe to say the late Churchill would have viewed with the utmost contempt — steps in to make demands of Israel. Demands which we in the West would never dream of making of many other countries which behave so badly that it is inconceivable that no-one has noticed. Likewise, of course, it went unnoticed by the entire Danish press that last week Germany banned the Turkish organization IHH, which was the real villain of the flotilla episode.

The flotilla is but one of a veritable shower of episodes which expose the moral relativism that has infected us in the West. Yes, there are lots of things wrong with our canary. But perhaps we should consider the part we ourselves play in inflicting diseases on our bird when we choose to desert it. We do not even have to like our bird, but our sense of self preservation alone should be enough to make us treat it better.