The formation of the new Dutch government is still in limbo, but if the Taliban have any say, the PvdA will be included in the coalition. The Socialists are regarded as friends of the Islamic radicals, and a Taliban spokesman in Afghanistan is not shy about saying so.

Here’s the latest from today’s Elsevier, as translated by our Flemish correspondent VH:

The Taliban hopes the Labour Party will govern again 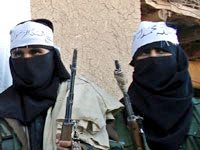 The Taliban thanks the PvdA [Labour Party, Socialists] for the upcoming departure of Dutch troops form Uruzgan. The radical Islamic terrorist organization says it hopes the PvdA will again become part of the Dutch government so that there will be a lasting friendly policy “toward Afghanistan”.

This was said by Qari Yusuf Ahmadii, the spokesman for the Taliban in southern and western Afghanistan in an exclusive interview with Dutch newspaper De Volkskrant.

The Taliban already had congratulated the Netherlands earlier in a telephone interview with Dutch newspaper NRC Handelsblad for the intended departure from Afghanistan. “The Dutch have said to themselves: we will not benefit here; our goals are not in this country, so why should we sacrifice ourselves?” Ahmadii said then.

This weekend the roughly two thousand Dutch troops will withdraw from the Afghan province of Uruzgan. Their task will be taken over by Americans, Australians, and NATO troops from Singapore.

Recently it was made public that the entire Afghan operation [of the Dutch], militarily and in terms of development, cost the Dutch €2 billion.

The new government may decide whether it will accede to the request by NATO for the Dutch to send police trainers to Afghanistan. However, with a right-wing government it will also be uncertain whether the Netherlands will comply with this request. The Party for Freedom is opposed to the military mission.

NATO will probably request the new Dutch government to allow the Air Force to remain a while longer in Afghanistan, as Dutch newspapers report.

“We still remember well the day the Dutch government resigned,” says Ahmadii, who states that the Taliban keep a sharp eye on the international media over the Internet. The spokesman also promises that there will never be peace in Afghanistan as long as foreign troops are present in the country. “The resistance will only become stronger.”

7 thoughts on “The Taliban Say: “A Vote for the PvdA is a Vote for Jihad!””