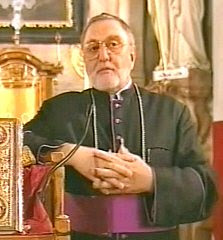 Bishop Emanuel Aydin of the Syrian Orthodox Church in Austria spoke last week at a conference in Macedonia. The conference was one of the usual ecumenical feel-good “dialogues” which are so beloved by the Vatican, Reformed Jews, and the Muslim Brotherhood. Bishop Aydin’s message, however, was tough and uncompromising in its stance about Islam. One suspects that many of the delegates to the conference were not at all happy with what he had to say.

Many thanks to JLH for translating the speech from the original German:

Address on the Occasion of the Conference
“Dialogue of Religions and Cultures”
Ohrid, Macedonia May 6-9, 2010
Emanuel Aydin
Chorepiskopos
Syrian Orthodox Church of Austria

In the name of the Father and the Son and the Holy Ghost of the one God. Amen.

In the framework of this conference with a circle of outstanding personalities, we have the marvelous opportunity to discuss the dialogue of religions and civilizations. I thank UNESCO for making this task its own. I especially thank the Macedonian government for enabling us to take up this difficult task in such a welcoming atmosphere and inspiring surroundings. In an area where civilizations have encountered one another for millennia, the world community can justifiably be called upon to seek what we all have in common.

So much more is it our responsibility that our answers not remain stuck on the surface as formulas and attractive mottoes. Many here are depressed by the possibility that the oft-expressed desire for “dialogue” will rigidify into mere ritual and cover over the actual problems of people with varying religious backgrounds living together.

In answer to the first question: The paradigm, the example and the prototype for the “dialogue,” the Socratic dialogue as described for us by Plato. It is the cooperative struggle for truth, for insight into reality. Socrates attempts to draw perception from his interlocutor just as the midwife tries to help the mother at birth. The basic requirement is that both partners of the conversation are guided entirely by reality. In other words, they must both be concerned only with the truth. In regard to questions of justice, piety, and bravery, Socrates and his outstanding student, Plato, try to do just that: recognize and formulate truth. An insight must never be imposed.

The Platonic dialogues instruct us that it is difficult to achieve the truth by natural means. In the dialogue “Phaidon,” Plato expresses the hope that God himself will come to our aid. We find a masterful example of genuine dialogue in the dialogues of Justin the Martyr (Dialogue with the Jew, Tryphon) and the debates of St. Ephraim of Syria with the opponents of his time, especially Neo-Paganism under Emperor Julian Apostata.

Plato’s concern was captured masterfully by the African church father Augustinus in his dialogue “On the Teacher” (De Magistro). St. Augustinus tells us that true insight can never be imposed or “taught.” Individual insight is necessary, which is gladly vouchsafed to each honest seeker.

Concerning the second question about the meaning and goal of the dialogue: The meaning of the dialogue is in the classical sense simply directed at gaining understanding. What could this comprise? With great aspiration, “absolute understanding” could be the goal: insights which lie beyond the insights of the partners to the dialogue and which, at best, even overcome these positions. Is that a realistic demand in the “dialogue of religions” which is consciously committed to differing principles of faith and realities of manifestation? I think not, for it would radically oppose the self-image of all religions, so as to comprehend what each “Other” thinks and wants. Only in a following step could the modalities of a peaceful and fruitful togetherness be considered, by asking whether there are rules seen from a third standpoint — for instance that of the secular state — which are compatible with the convictions of all partners to the dialogue.

Even such an “unambitious” goal assumes at a minimum that one partner to the dialogue not imply that the other would not know or understand his own position.

Today, we Christians must take note that many of the public dialogue forums held worldwide, in which “commonalities,” “solidarity” and “cooperation” are invoked, have not contributed to a better understanding of the Christian faith. In publications from Islamic countries, in concord with Islamic source texts, Christians are still condemned as “polytheists” or “infidels.” The Christian belief in the most sacred Trinity is misrepresented. We Christians believe in Father, Son and Holy Ghost, not in Allah, Isa and Maryam!

We Christians are not “people of the Book.” We are “people of Jesus Christ.”

We think of ourselves as “Christianoi” — “those who belong to the Messiah, as it was expressed for the first time in Syrian Antioch in the time of St. Peter, the first of the apostles.

There must be no Islamic prerogative of interpretation about the Christian faith. It would dramatically contradict the basic principles of dialogue as just delineated.

It is even more destructive when one partner to the dialogue is deemed unworthy of protection as a person or a subject in a common regime. This point is mostly omitted, but it cannot be denied that such an attitude is set down in numerous Koranic verses.

To this day, Muslims have not distanced themselves from such Koranic statements in any conference I know of.

We are also quite far from the second possible goal of the dialogue.

One could also set a more modest goal for the dialogue. “The path is the goal” is a not-infrequent stylish motto. If at the time a goal of perception cannot be realized, the dialogue is justified by the fact that people are dealing peacefully with one another as long as they are speaking and abjure violence as long as they are sitting together at the conference table.

But even this hope proves deceptive.

As we are speaking of dialogue here, Christians are being persecuted for their beliefs in Egypt, Nigeria, Pakistan, Iraq, Malaysia, the lands of the Arabian Peninsula and many other countries. Muslims are emboldened to overreaching violence by calling upon the authority of their sacred writings.

It is a certainty that there is no one in this hall who does not condemn such acts of violence and believe that they are incompatible with his basic beliefs.

This problem brings us to our third question, about the partners to this dialogue. The question can be formulated differently. Who speaks for whom and with what authority and degree of representation? And who distances himself from what and with what responsibility and gravity? What Islamic dignitary has rejected the demand of head-of-state Gadhaffi that all Muslims enter into jihad against Switzerland? How does it happen that in the parliament of EU candidate country, Turkey, Christians are called “infidels” and in Turkish religious publications Christians are described as second-class human beings? What sense does it make to speak about dialogue with representatives of Al-Azhar University in Cairo who, on other occasions, describe terror attacks as justified self-defense?

There are admittedly always people at work here who can be said not to be representative of the religion as a whole. What does it signify when religions and cultures, not persons, want to enter into dialogue? How can a dialogue, whose subjects are world-wide collectives or intellectual-spiritual concepts, be shaped? The requirements for answering such question are too complex to allow answers. This shows us that we are standing at the beginning of a long path in the dialogue of religions and cultures. And it shows us that we should be very cautious in how we deal with the expectation that dialogue would be a universal cure for the conflicts of this world. Is there not even a danger that a toothless dialogue will nourish and strengthen the conflicts it conceals or create a sympathetic alibi for those who regard dialogue as a weapon?

To be sure, there are also moments if hope and confidence. The new president of the Council of Europe, the Turk Mevlut Cavusoglu said in his inaugural address that intercultural and interreligious dialogue must be strengthened. All sorts of racism, xenophobia, anti-Semitism, Islamophobia and similar phobias which lead to discrimination and intolerance must be stamped out. I would like to believe that President Cavusoglu included among these phobias anti-Christian sentiment, which we experience daily.

An understanding of this kind would indicate acceptance of comprehensive human rights, which should be the basis of or policy. It is an understanding that points to the “Assumption of Naum,” which was chosen as one of the guidelines of this conference. It is a vantage point out of which the life model of Europe, to which we owe our freedom, was developed.

What dialogue must under no circumstances encourage are cultural relativism and double standards in human rights.

For us as Christians and for me as a priest of the Syrian Orthodox Church, there is of course more to declaim, namely Jesus Christ, the savior of humanity. He is the prototype of any dialogue, since he has told us in many conversations with friend and foe: The truth shall make you free.

That is the source and the zenith of the dialogue: not just the Socratic, philosophical insight into intellectual truth, as good and valuable as it is, but the encounter with the word-become-flesh in freedom and truth. We don’t give it cheaper. That is the message we have received and that we offer here.

That is what I would like to proclaim here.

I would also like to proclaim this message everywhere, unimpeded, without being sentenced to inhumane punishment for “upheaval” (al-fitna).

That is why I have come here.

God bless you all, the hospitable citizens of Macedonia, and the dedicated representatives of all the earth.

Thank you for your attention.

13 thoughts on “Rejecting a Toothless Dialogue”