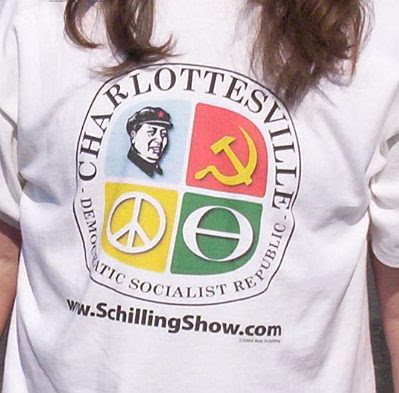 It’s Tax Time in the U.S. The last day to legally pay your taxes or face fines for failure to do so. Now comes also the second annual Tea Party, with lots of gatherings all over the country. This will probably continue to be a contrarian event every tax day and every 4th of July – at least as long as such gatherings are legal.

The one in Charlottesville was sedate. Smaller than last year, perhaps because:

(a) the novelty is wearing off;
(b) folks have been intimidated by the name-calling in the MSM (i.e., only bigoted white people go to Tea Parties);
(c) it’s midweek, late afternoon, in a part of town – the main corridor through the city – where no sane person willingly ventures when work traffic is beginning to build, especially not on April 15th, with the crush to get to the post office to get the tax envelope marked on the due date.
(d)it was actually at the Post Office, on the right of way, a grassy area between the parking lot and the sidewalk.

However, the venue had certain advantages for those attending. Fortunately, the weather was lovely. There was lots of passing traffic to see the signs and honk their approval (one passing car shot an obscene gesture out the window at me; I waved and smiled in return). All but one of the big rigs (the 18-wheelers) gave tremendous honks of their horns and waved.

The gathering started at 4:00 p.m. Given my precarious health, we didn’t decide to actually go until about twenty minutes before it was time to leave for town (I’m glad it wasn’t yesterday as I was hardly functional).

I sat in one place, on the grass, or occasionally took an extra hand-made sign from one of the other attendees and waved it at the passing traffic for a while. I was fond of one that said “socialism is trickle down poverty”, but I also took turns with one about jobs…or the lack thereof. My very favorite sign was a half-block so south of me. It read “Save the Trees. Stop Printing Money”.

The Baron estimated there were three hundred people or so at the event, which is about a fourth of the 2009 crowd. However, the venue last year allowed for a lot more people and was easier to get into and out again. He watched the TV babe give her estimate – 150 – and corrected her later. He also told her she misused the word “renege”. Heh. Glad we don’t have a TV. She didn’t cotton to being corrected. 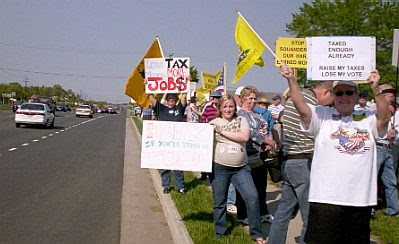 I wonder if she and her cameraman will show the children running around, or the teenager selling chocolate bars, or the mothers with babies, or the young pregnant woman standing with her sign? Or will her tight focus be solely on the older folks – you know, the “angry, educated white people” who are the only attendees…per the MSM?

This year’s event was two hours long. Much better than last year, which ran far past most people’s ability to stay through it all. 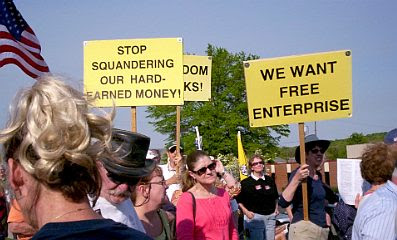 It was festive and upbeat. People still have some hope they can make a difference. The fact that so many states are fighting provisions of the omnibus health care bill gives a sense of focus. In fact, while no politicians were speakers that didn’t keep candidates for the district from showing up with flyers and buttons. It looks like there are lots of would-be congressmen beginning to campaign, hoping to dislodge our current seat holder.

One of them told me that our district is bigger than the state of New Jersey. Whoo boy! With the exception of Charlottesville, District Five is sure a far cheaper place to live than New Jersey:
– – – – – – – – –

It also includes a couple or three terrorist compounds, but they weren’t mentioned in the wiki.

During the last Congressional go-’round, the Democrat winner rode Obama’s coat tails. In a certified recount he won with a margin of 727 votes. That’s 0.229% out of the 316,893 votes cast. This time he will have to fight the shadow of Obama, which may be difficult considering that he’s voted the straight Dem line since he got to Washington. In fact, given his loyalty, I expect Obama will be on the campaign trail for his chum. That may prove to be a liability for the boy; we’ll see.

After the event, people went next door to a restaurant. Being on a budget we skipped that part and bought some garden flowers instead. Now that I consider our purchases, those flowers were red, white and blue. Hmm… 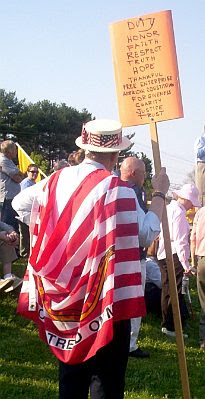 Which reminds me: when we sang the national anthem, I noticed few children or teenagers sang along. I asked some of them about their silence and they admitted not knowing the words. One boy said, “I’m working on it”.

Your kid can’t sing the national anthem?? Sheesh. Should you thank a teacher? Or are teachers permitted to give instruction on anything as seditious as “The Star Spangled Banner”?