A little further south, meet Nicolas Blancho, president of the Islamic central council in Switzerland. JLH has translated an article about him from Basler Zeitung:

Stoning As a Religious Value

After his weekend appearance on Swiss TV, Nicolas Blancho, president of the Islamic central council, is really under fire for the first time. He himself proceeds on the assumption that he is being watched by national security. 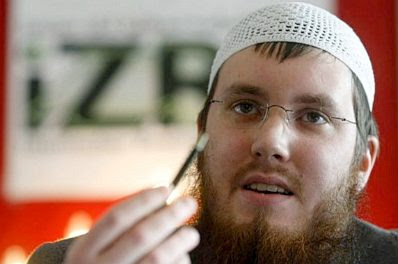 Two national party leaders have made critical remarks about Nicolas Blancho’s appearance on Swiss TV’s “Arena.” CVP [Christian-Democratic People’s Party, “conservative”] President Christophe Darbellay said over the weekend that Blancho has to “distance himself from methods that do not accord with our legal order.” And: “Fundamentalists have no place in Switzerland.” Similarly, Fulvio Pelli, president of the FDP [Free Democratic Party,”liberal”]: “Religious fanatics are dangerous. You must not underestimate them.”

The background to these comments is as follows. On Friday in his “Arena” appearance, Blancho said emphatically and repeatedly that he and the Islamic Central Council obey Swiss law, even when it is in conflict with his religious views. However, he would give no clear answer to whether he was for or against stoning in Islamic countries.

In an interview with the newspaper, “Sunday,” Blancho said in regard to stoning: “For me as a Muslim, it is a component, a value of my religion.” However, it is, “with the given conditions in the world and in Switzerland, not transplantable.” He did not want to distance himself clearly from stoning in the “Sunday” interview. “You can’t ask someone to distance himself from celibacy. Or the Jews to distance themselves from the Talmud.”

People in Blancho’s hometown are concerned too. City president and SP [Social Democratic Party — “socialist”] national councilor, Hans Stöckli, said in reference to the “Sunday” interview, that he had not been informed by either the federal police or the intelligence service of any observations or insights concerning this “central council.” It is unsatisfactory, he said; the city of Biel did not wish to be drawn into “these kinds of important, political-security questions.” Stöckli explained that the Biel city administration had therefore tasked him with “an analysis of the situation, to clarify what action may be necessary concerning extremist groups in Biel.”

13 thoughts on “Stoning As a Religious Value”