After the success of Geert Wilders’ party (the PVV) in the Dutch municipal elections earlier this month, the PvdA (leftists) are attempting to regroup. One of the PvdA’s strategies seems to be to elevate Amsterdam Mayor Job Cohen at the expense of party figures who have been associated with past failures.

Another rising star of the PvdA in Amsterdam is Ahmed Marcouch, whose ascent is apparently yoked to that of Mr. Cohen. Our Flemish correspondent VH has prepared a report about the multicultural duo from Amsterdam.

Cohen wants Marcouch at his side in The Hague

Job Cohen wants to take his PvdA [Labour Party, Socialists] colleague Ahmed Marcouch from Amsterdam to the Hague. The new leader of the PvdA suggested this to Marcouch shortly after the municipal elections [which thus would have been before Wouter Bos resigned for so-called “family reasons”] Cohen sees Marcouch as a welcome strengthening in the upcoming parliamentary elections of June 9. According to the Amsterdam newspaper Het Parool, this choice makes it more difficult to dismiss Cohen as “soft” and “multicultural,” as the PVV likes to do. 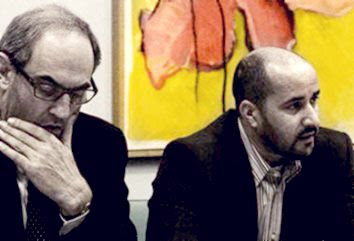 That Marcouch join the table in the TV programme Pauw & Witteman [of the left-wing broadcaster VARA] on Friday was also insisted on by the former mayor of Amsterdam [that much influence he seemingly has on a subsidized TV program]. Despite the alleged offer by Cohen, Marcouch would reportedly prefer a position as alderman in Amsterdam. Whether he is eligible for that is as yet unknown. Deputy mayor Lodewijk Asscher (PvdA) approached him to become Chairman of the PvdA in Amsterdam.

Marcouch has doubts. “I want to pick up the struggle against the problems of the district and for the freedoms of gays and Muslims, as in Amsterdam-Slotervaart. That is why so many Amsterdammers gave me their vote. So I cannot do anything else but go for to the position I can best fulfill that promise with.” The former district chairman of Amsterdam-Slotervaart was in elected in the municipality with preference-votes. [Note: on election day, at 08:15 in the morning, he sent 12,000 text messages to telephone numbers he had taken from a database of the Amsterdam-Slotervaart district council: “Elections Today! Go vote. Give your Preference vote for the council to Ahmed Marcouch, PvdA list 1 number 29. Every vote counts! Thank you!” —Needless to say the Public Prosecutor is not investigating this.]

Het Parool: “Marcouch has doubts about taking a seat in both the parliament in The Hague in addition to the Amsterdam City Council, but does not exclude it. He must decide by Wednesday. […] Persons involved assume that he will apply for a seat in parliament this week. Should he still become alderman, then he can always withdraw before the elections of June 9.

Marcouch: “Islam is essentially enlightened. The first commandment in the Koran is education. When you study Islam properly you see that Islam in its essence is liberal, individualistic, freedom-oriented.” Marcouch goes to his bookshelves, and brings forth a beautifully designed book, gilt-edged, glittering in the sunlight. “This is the collected works of Said Qutb, the Egyptian scholar who in the sixties was executed by Nasser. He is being labeled by the AIVD [Dutch Secret Service] as the godfather of Islamic extremists and the inspiration of the Takfir al Hizjra, followers who say that Muslims should isolate themselves. But what Qutb meant was that he no longer observed the real Islam in society, the Islam of equality and social justice. This is essentially an enlightened view. What does that mean for Muslims in this era? The biggest threat to Islam is the stupidity and ignorance of Muslims themselves. That is the lesson you can learn from Qutb.” […]

“The biggest mistake is that from 2008 onwards, the government no longer wants to allow imams from abroad. But you must precisely invite Muslim heavyweights from abroad to give lectures here, as a counterweight to Afshin Ellian. Youssouf El Qaradawi for example, the President of the European Council for the Fatwa. Such figures you must use, to bring forward the message of social participation with authority. […] Is it not bizarre that priests from South America will soon be allowed into the country, and do not have to do an integration course? […]

— How do you think it will go further with the Muslims in the Netherlands? Many people are afraid a large Muslim underclass will arise.

“That subclass is already here. It would be naive not to face that. But we must not only view that as a socio-economic phenomenon. It is much more essential that the Netherlands abandon the illusion that the Dutch culture is purely made up of the Judeo-Christian tradition. Islam is intertwined with the Judeo Christian tradition. If the Dutch accept that, the Muslims will feel they also are part of it.” […] “You can not claim that a religion that has been so vibrant for centuries, now only consists of blood-lust and fanaticism. Look,” says Marcouch, and brings out a nice looking book: Islam. Art and Architecture. “About the heyday of Islam,” he says. “Muslims still live in this: the past. But they forget that our ancestors had worked extremely hard for it.”

16 thoughts on “The Multicultural Duo from Amsterdam”