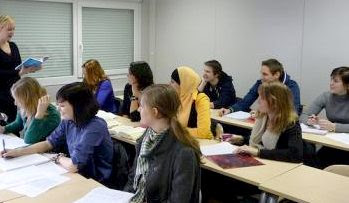 Our Norwegian correspondent Vikingskog sends an abridged translation of a news article, along with his commentary. He says:

There’s a news article in Norway today that says that people who speak Norwegian as mother tongue (Norwegians) may become a minority in Oslo schools by 2021.

Obviously, that’s a mild statement with some political correctness to it. It’s not a matter if it will become like that; it’s just a matter of time. So there is no “may”, just “when”.

Vikingskog has translated the most interesting parts of the article:

Norwegian-speaking students are a minority at 58 elementary schools in Oslo, as shown by the results from a recent study.

During the last five years the number of schools in which Norwegian-speaking students form a minority has increased by 18, from 40 to 58.

Today (2010) 40% of the students in Oslo are minorities. The number of non-Norwegian students in Oslo has increased by 1% each year, which means that Norwegians will be a minority in Oslo schools in 2021, if the trend continues.

AP politician Jan Bøhler [AP is the party of the current prime minister, and the party with the most power] says that they should ensure that every school has at least one-quarter Norwegian students.

What Jan Bøhler wants is to spread the immigrants out, which will just make the development even more severe, since then we will become a minority faster in all regions of Norway, instead of just the Oslo area.

Jan Bøhler is naive and thinks they somehow can stop Norway from becoming Islamic, without first stopping immigration and starting to send people home.

And, of all the politicians on the Left, Jan Bøhler is actually the one who is most critical of immigration (one of the least politically correct), which makes it even more depressing, since what he says is so narrow-minded and pointless.

He thinks it can all be solved by spreading the Muslims around in Norway, but he doesn’t realize that there are too many of them and that segregation is already too widespread. They can’t get the birthrate down and they don’t send people home and they don’t stop the immigration.

To stop Norwegians from becoming a minority in Oslo schools, they must stop the immigration at once, send back everyone who can be sent home, and try to make others want to move home. That is what is necessary, whether people like it or not. Without doing that, we can’t stop it.

It’s high time that politicians realize this and grow a spine. But I don’t think they will. None of the politicians will do what’s required — the right wing want to institute a stricter immigration policy, which would obviously be better, but that will just slow the situation, not stop it. Even if they stop immigration entirely, the Muslims will still become more numerous than us because of their birth rate, which shows no sign of decreasing.

There is also another article today, which you may find interesting.

One of the ministers from AP (who is responsible for immigration) says that he wants the EU to control Norwegian immigration policy.

And he proclaims that will decrease the amount of immigration and make it easier.

The elites in AP want us to join the EU. They have their own agenda, even though a large majority of AP voters do not want to be in the EU.

AP do everything they can to sneak EU laws and so on into Norway, and I think they will succeed in sneaking in so much that people will eventually think that we might as well just join the EU, since we will by then have most of the EU’s laws and rules.

Finally, however, since the EU’s immigration policy is becoming more and more transnational and controlling, plans such as those the minister advocates will make it nearly impossible for us to stop the immigration completely. Denmark already got in a lot of trouble with the EU some years ago when they instituted their strict immigration policy.

I think that the right wing will almost certainly win the election next time (in three years), but it remains to be seen if that will help anything at all. In the long run, I doubt it. I think what is happening in Europe can’t be stopped by politicians, because no politicians are brave and politically incorrect enough to do what must be done, which is to get 80% of the Muslim immigrants out of here.

So I believe the situation will just keep getting worse and worse, until it eventually becomes civil war or at least very violent. Even though we are a people who have legendary great patience, and are extremely naïve and passive here in Scandinavia (especially Norway and Sweden), our patience will run out eventually, and by then we will have a lot of frustration built up.