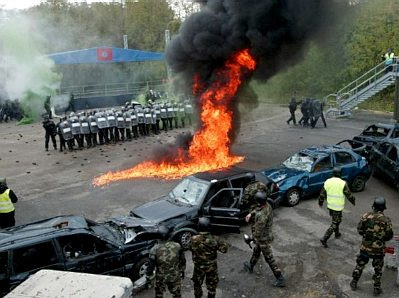 “EGF, the EU’s Gendarm Force to combat citizens who are disobedient to the Lisbon Treaty…” (source)

The European Union is often mocked as a toothless political entity that lacks any military power. There has been talk of an EU-wide army, but so far most military functions remain with individual member states.

Internal security is a different matter. Brussels has quietly organized an outfit called EUROGENDFOR, the European Gendarmerie Force, which is designed to quell riots, uprisings, and other forms of violent internal dissent. According to the report below, EUGENDFOR is preparing to deploy to Greece to prevent a possible descent into violent anarchy in the wake of the country’s severe economic crisis.

Our Flemish correspondent VH has compiled an extensive report based on articles at Het Vrije Volk (Dutch) and Kopp Verlag (German), with additional material from other sources:

Will the special EU-unit be deployed in Greece?

The economic crisis and the resulting growing unrest offer the EU government in Brussels a welcome opportunity to quietly test the deployment of a ‘secret’ EU force, which was established to put down uprisings in the EU. This secret unit is called EUROGENDFOR, has its headquarters in northern Italy, and is now preparing to leave for Greece, to be deployed against the population of an EU country.

There is something brewing in Greece. The protests of the citizens in the urban areas are becoming more violent. While the Germans advise the Greeks to get up earlier and work harder, anger rises in the Greek streets. In Brussels, all preparations are being made to for the first time employ the ‘secret’ EU force to crack down on uprisings. Most Europeans have never heard of this ‘secret’ unit.

The staff of the European task force of 3,000 troops has its headquarters In the Italian town of Vicenza [in the “Generale Chinotto” barracks], and is called “EUROGENDFOR”. It was initiated by the former French Defense Minister Alliot-Marie after the French had to deal more and more frequently with internal uprisings of Muslim immigrant youth with street battles and looting. With the powers of the secret service, the equipped unit must in close cooperation with the European military guarantee the ‘security in European foci of crises’. It is its duty as a police force to crush rebellions. More and more EU countries are joining EUROGENDFOR.

From the Eurogendfor website: “…the EGF HQ is now developing a comprehensive and coherent operational system, which will permit to be ready in case of prompt deployment to crisis areas. EGF goal is to provide the International Community with a valid and operational instrument for crisis management, first and foremost at disposal of EU, but also of other International Organizations, as NATO, UN and OSCE, and ad hoc coalitions.”

Note: Turkey joins the European Gendarmerie force as Observer. “Furthermore,” Furthermore EGF states: “…it is excellently suitable for deployment parallel with or immediately after a military operation to maintain public order and safety as well as in situations where local police services are not (sufficiently) deployed. Since January 2007, the EU has in theory always had two battlegroups on call, each comprising at least 1500 combat soldiers.” 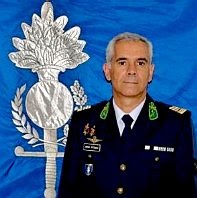 EUROGENDFOR is nothing else but a paramilitary police unit which in times of crisis can be deployed instead of the regularly army, so as not to raise the impression that an army of the country itself would fire on its own citizens. To that purpose the secret unit EUROGENDFOR exists. The European Gendarmerie Force could theoretically be deployed anywhere the EU sees a crisis — for example, when an EU country does not ratify the Lisbon Treaty, or against the will of the central government in Brussels wants to leave the EU. It’s in the Lisbon Treaty, which regulates the deployment of EUROGENDFOR.

The cross-shaped sword in the arms of EUROGENDFOR symbolizes the unity, the bay leaf victory, and the flaming grenade the common military roots of the police unit. The motto “Lex Paciferat” means “The law brings peace” [or “The law pacifies”] and stresses “the principle of strict relationship between the continuation of the fundamental legal principles and the restoration of a safe and secure environment”.

Deciding on the strategy of deployment is a “war council” in the form of a ministerial committee, composed of the Ministers of Defense of the participating Member States. The unit may on request, or after a decision by the EU, be deployed. In Article 4 of the establishing treaty, the duties of the unit are described as follows: “Protecting the population and property and maintaining the public order during activities of public unrest”.

During deployment, the troops of this paramilitary EU unit must indeed commit to the laws of the state in which they are stationed and deployed, but: all premises and terrain that are seized by the troops are immune even to authority of the state for which the troops operate, and not accessible. Accordingly, the EU juggernaut also suspends national law to combat uprisings. Whether or not the citizens want that.

EUROGENDFOR is a rapid deployment paramilitary police force with the powers of a secret service. It combines all military, policing and intelligence powers and all resources which it may exercise after given the mandate of a ministerial crisis-staff in any theatre to combat any disturbances, riots and major political demonstrations in cooperation with national police and army troops.

The German Ministry of Defense praises EUROGENDFOR on its Internet site with the words: “Police and army: a European gendarmerie promises the solution.” Nevertheless, Germany does not yet participate in this unit with its own troops, but the Ministry of Defense has already stated that with the Feldjäger (military police) they will still have a good military police. Also the German government expects serious internal uprisings — namely when the economic crisis comes back, the naïve promises of politicians have blown away, and the funds to alleviate the suffering of the people are empty.

“Ad omnia paratus? (Motto of Northern EU rapid reaction force, meaning: ready for everything) The coat of arms of the Nordic EU battlegroup is since 2007 depicted as a castrated lion at the request of female Swedish soldiers. The Times: Coats of arms containing lions without genitalia were given to those who betrayed the Crown.”

EUOBSERVER / BRUSSELS 8 Sept. 2009 — The Swedish EU presidency wants defence ministers to have a closer look at the bloc’s quick response forces, which so far have never been deployed due to a lack of consensus among member states. “The concept of EU battlegroups is good, but they have not been used until now. We want to have a political discussion on why this is the case,” Olof Skoog, a diplomat representing the Swedish EU presidency told members of the security and defence committee in the European Parliament on 7 September.” Last year, Stockholm co-ordinated the set-up of the Nordic battle group, comprising 2,800 soldiers mostly from Sweden and also from Finland, Norway, Ireland and Estonia. The endeavour cost Sweden more than €100 million. “We made the investment in order for the battlegroup to be used.”

Parallel to the Lisbon Treaty, the Netherlands, France, Italy, Portugal and Spain founded an armed “gendarmerie”, a Military police force (EGF, ratified in Noordwijk, the Netherlands in 2004, operational since 2006) aimed at crisis control: “its purpose is the creation of a European intervention force, which will militarize police (a.k.a. gendarmerie) functions and specialize in crisis management.”

“EGF responds to the need to rapidly conduct all the spectrum of civil security actions, either on its own or in parallel with the military intervention, by providing a multinational and effective tool. The EGF will facilitate the handling of crisis that require management by police forces, usually in a critical situation, also taking advantage from the experience already gained in the relevant peace-keeping missions.”

The Netherlands further takes part in the EU rapid response force of EU Battle Groups with a mission that is similar to the EGF (crisis). The EU UK-Dutch Battle Group (this spring stand-by) and EU Battle Group 107 (stand-by this autumn).

“The EGF responds to the need to rapidly conduct all the spectrum of civil security actions, either on its own or in parallel with the military intervention. Based in Vicenza. EGF’s goal is to provide the International Community with a valid and operational instrument for crisis management, first and foremost at the disposal of EU, but also of other International Organizations, as NATO, UN and OSCE, and ad hoc coalitions. Turkey joins the European Gendarmerie force as Observer.“

Quote May 14, 2009: “In a written statement released on Tuesday, the Italian Embassy in Ankara expressed pleasure over the fact that Turkey would for the first time participate in an executive committee meeting of the EGF which was scheduled to be held in Paris yesterday. “On the occasion of the previously mentioned meeting, Turkey’s entrance into the EGF with the title of observer will be registered. Italy has always pointed out the importance of having Turkey included in the EGF. The aforementioned development is once more proving the importance of the role played by Turkey in strengthening the European security system,” the statement said.”

Furthermore, it is excellently suitable for deployment parallel with or immediately after a military operation to maintain public order and safety as well as in situations where local police services are not (sufficiently) deployed. Since January 2007, the EU has in theory always had two battlegroups on call, each comprising at least 1500 combat soldiers.”.

“Furthermore, it is excellently suitable for deployment parallel with or immediately after a military operation to maintain public order and safety as well as in situations where local police services are not (sufficiently) deployed. Since January 2007, the EU has in theory always had two battlegroups on call, each comprising at least 1500 combat soldiers.”.

Quotes from comments at The Telegraph:

Well, most continental countries have armed, paramilitary bodies of riot-police, whose job is to ensure that an unruly populace does what it is told. This is the ultimate tool of government in countries that were invaded by Napoleon and/or had fascist or communist dictatorships (practically all of them). So the EU, in its wisdom, has already created its very own body of armed paramilitary riot-police — the European Gendarmerie Force (EGF). Have you never heard of it? Do you think this is just a Europhobe’s wild imagining? Well, go and see their own official website: www.eurogendfor.eu. You’ll see that their nucleus has been drilling and training in Vicenza, Italy, for several years now. They have been in Kosovo, they have sent a contingent to Haiti. There is a treaty, the Treaty of Velsen, to give it a legal basis. The EGF is now officially in the service of the EU. So far there are six participating EU countries, but it can be deployed in a non-participating country with the “agreement” of that country, ie of its government. By the way, our own government was asked in Parliament (by UKIP) for an assurance that it would never grant that agreement, and the assurance was refused. Think what that tells us about our own government’s intentions.

So if Germany, via the EU, tells Greece to apply harsh austerity measures against its own people, it will have the means to make sure that its orders are obeyed.

It will be called “European governance”.

The Greeks as stated can simply refuse the EGF entry. OK lets assume they are pressurised in to letting them in then what do they do? They will be met with violence by the Greek protesters then what do they do? Every busted head will be caught live on video and be on UTube within the hour. A death will mean the end of the EGF for good and it might just take the whole bonkers EU project with it.

Do you think even the insane bureaucrats in Brussels will play for those stakes?

28 thoughts on “The Armed Enforcers of the Fascist European Superstate”