Our Flemish correspondent VH has compiled a report about massive voting fraud during the recent municipal elections in Rotterdam, mainly in immigrant neighborhoods. His account reminds me of what happened in Philadelphia in November 2008, when armed New Black Panther auxiliaries at the polling stations made certain that white voters understood who was in charge of Philly.

What happened in Rotterdam is something for others in Europe to be aware of at their next local or national elections. An official from Leefbaar Rotterdam visited polling stations in immigrant neighborhoods early in the morning, to see whether the voting process went neatly and according to law, but he was shocked at what he encountered, at almost any polling station he went to visit. Many complaints and witness reports followed later that day (when the outcome was still fully unknown). This happened previously in Rotterdam and Amsterdam in 2006, and also occurred in other cities last week. But it seems the worst cases were of fraud and intimidation were in Rotterdam. 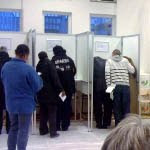 In the Netherlands, immigrants without a Dutch passport and/or knowledge of Dutch language are allowed to vote in municipal elections.

The photo at right was taken at one of those polling stations, showing people together in a voting booth telling someone who to vote for.

Below is an article from Contradicere, as translated by VH:

Municipal elections in Rotterdam: what happened?

Aboutaleb [finally] admits that it has been proven that in at least 13 polling stations voters were influenced to vote for a certain party. Sometimes even by parties present there. Possibly even by the staff present there.

In a number of polling stations people huddled together in a voting booth. In a significant number of cases this was done under the eye of the polling staff, who did not interfere. In some cases it was tolerated.

There are cases which go beyond imagination. In a number of cases witnesses speak in particular about the elderly — including indigenous people — where intimidated even into the voting booth to vote for a “certain” (read: PvdA, Socialists, Labour) party.

In some cases people came into the polling stations with a letter especially for those who do not speak the Dutch language, which contained instructions on which party to vote for (PvdA) and even which candidate.

Blank proxies [voting mandates] were accepted. On the spot proxies were recruited. Proxies were even written out on the spot. In not a few cases even by the polling staff themselves. People were allowed to vote who could not identify themselves.

In order to keep the peace and not to escalate the very aggressive tense atmosphere, in many polling stations it was decided to let immigrant voters (read: Muslims) just go their way. And you may translate that into PvdA votes.

In at least three instances, polling staff had been replaced [following complaints] because they did not want, or dare, or were powerless, to intervene and to act against the practices of immigrant (read: Muslim) “voters” and recruiters.

In one case the chairman of a polling station was forced to leave his duties because he refused to act against certain abuses. He had to make way, along with other employees, for a fresh team of employees and a chairman.

In many polling stations help had to be called in from the government to ensure orderly voting. In some cases, city guards and/or supervisors proved to be even worse than the disease.

Completed voting ballots seem to have disappeared. This might possibly concern a few hundred to several thousand votes. There were reportedly two ballot boxes found empty. Nobody knows what happened to the filled-out voting forms that were in there. [And those were mainly from the more indigenous neighborhoods.]

And this is just an abbreviated list of a few facts which have come to light. People talk about “African circumstances” [or “Harare on the Maas” (the Meuse)].

The PvdA doesn’t want to know any of it. Even the mayor, Ahmed Aboutaleb (PvdA) sticks his head in the sand. The results of the elections, However unreliable they are, have turned out well for his party.

The difference between the PvdA and Livable Rotterdam [Leefbaar Rotterdam, the party Pim Fortuyn founded in 2002] would not be more than about 650 votes [to the benefit of the PvdA]. An unacceptably small difference. Certainly if we take into account all of the abuses and illegal acts, this calls for a recount and other drastic measures.

That does not seem likely to happen though. Not in the least because Mayor Ahmed Aboutaleb does not wish to give his cooperation to this. Yesterday morning he officially declared the [fraudulent] outcome to be final.

Marco Pastors of Livable Rotterdam has appealed against the outcome on 53 points, and also against the final determination. On March 16 the city council will study this. A city council dominated by the PvdA. On the face of it, this does not provide any basis for trust.

How this will turn out only time will tell. Will the PvdA accept this shadow of “stolen elections”? Probably they will, because with this they can deal a hard blow to Livable Rotterdam, whom even before the elections they had excluded from participation in a coalition.

Marco Pastors now has linked his fate to the outcome. Another four years of opposition is too much for him, he said his statement. If this is the outcome Pastors, who has meant an incredible amount to Rotterdam, will be packing it in.

Something that the PvdA Rotterdam will look forward to with joy. The mere departure of Pastors and the potentially very negative consequences for Livable Rotterdam would be reason enough for the PvdA, and thus Aboutaleb, to maintain the “results”.

These are conditions that would not be unbecoming in many dictatorships and banana republics. In every way the event is a disgrace to democracy, which certainly, whatever the final outcome might be, has been severely damaged. Not to mention the sense of injustice among indigenous voters.

In a number of other cities similar events occurred, also within parties (mostly the PvdA) that are being taken over by immigrants while indigenous candidates are being blocked, demoted, or pushed out.

11 thoughts on “Something is Rotten in Rotterdam”