Our Portuguese correspondent Afonso Henriques has sent in a couple of translations about cultural enrichment, Lusitanian style. He included this note with the two articles:

The Socialists in power have been doing so much mischief — trying to buy all the media, trying to cut money to conservative Autonomous Regions, generally spending the last year not governing, and threatening to force new elections — that the cultural enrichment of ethnic minorities seems minor.

Ah! Of course, and one more year goes by in which no one in my family gets a raise, and inflation increases steadily. See? How can we complain about misbehaving ethnic minorities?

And here are the stories. It basically involves a set of strong Brazilians who practice Jiu-Jitsu, rob for a living, and kill by chance.

The first article is from Correio da Manhã, February 23rd, 2010:

Lisbon: Investigation of the Special Unit of the DIAP reveals failures in security.

Brazilian Murderers Get in Without Any Control 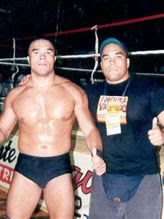 They pass through the Portela Airport [Lisbon] under the pretext of martial arts tournaments and commit crimes.

[Photo caption: Sandro “Bala” (Bullet) at the left in the photo beside his brother Júlio Pudim. Sandro “Bala” is a Jiu-Jitsu champion, and is being sought for various violent crimes]

They are experts in Jiu-Jitsu. Some have already killed or stolen in their country, but, under pretext of fake competitions in that martial art of extreme violence, many Brazilians had their passports approved in the Lisbon airport, and then installed themselves in Lisbon or on the southern bank of the Tagus — where they lived practically through criminal activities. No one asked for their criminal records at the airport. They dedicate themselves to being illegal security guards, or to extortion in bars. Many came on the orders of Sandro “Bala”, “the Master”, also Brazilian, who has escaped the operations of the PSP [Public Security Police] and the GNR [National Republican Guard].

“Bala” ran away to Brazil in December, after another Brazilian was shot three times for revenge in Costa da Caparica [Portugal, in the Southern bank of the Tagus next to Lisbon. It is known for its beaches, and in recent years has been truly invaded, mainly by Brazilians], but he is the responsible [for the killing of the other Brazilian]: Under the security company Olho Vivo [Lively Eye], he imposed his services through violence in various establishments. His co-workers were recruited by him on the outskirts of Brasília — recidivist criminals who came to work in Security in Portugal.

To land in Lisbon and pass through the airport security as tourists was easy: they showed their Jiu-Jitsu belts, in colors that did not necessarily corresponded to their levels in the martial art, as well as the invitations to fake tournaments. Then they became illegal residents for months or years, making a living through crime.

Wanderley is at large in Brazil. He has a criminal record in Brazil and entered Lisbon with a tourist passport to participate in a Jiu-Jitsu tournament.

Jorge Teixeira [Portuguese], of the GNR [National Republican Guard], worked in the Operations Group [GNR] and had money coming from the crimes that was transferred to his account in Brazil.

After an investigation by the Special Unit to Combat Violent Crime of the DIAP in Lisbon, 600 men of the PSP [Public Security Police], GNR [National Republican Guard] and SEF [Foreigners and Borders Service] advanced last Friday.

Judge Arrests Ten of the Twelve Suspects for Various Crimes

After days of interrogation, five of the twelve suspects presented by the DIAP’s Special Unit to the Court of Criminal Instruction were remanded to preventive detention last Sunday night. The other seven got five sentences to domiciliary prison — one of which was to the military man Jorge Teixeira, of GNR — and two periodic presentations to the local police until judgment. The crimes of the group included manslaughter, attempted manslaughter, criminal association, aggravated extortion, aggravated coercion [obligate someone to do something], qualified robbery, offenses to physical integrity, and trafficking in drugs. “At large” in Brazil are the head of the group Sandro “Bala” and Wanderley, his accomplice in various crimes.

Recruited to Come to Steal and Traffic Drugs

Sandro “Bala”, today 38 years old, is known as “The Master”, and came to Costa da Caparica in 2002, since then assuming leadership of a group essentially composed of Brazilians, but also with Portuguese and Africans, with the goal of extorting money from owners of bars, clubs, restaurants and gyms. Always through strength, having destroyed various establishments and violently beaten their victims. “Bala” concentrated on recruiting new elements — enthusiasts of martial arts whom he knew in Brazil — and, according to the Public Ministry, his goal was to enlarge its activities to control the drug traffic in the area, and to assault and steal from the clients of the local bars.

4 thoughts on “Brasileiros: Part I”