Our Flemish correspondent VH reported several days ago on the Dutch crime-show host Peter de Vries, who was recruited by the leftist Pauw & Witteman talk show in their effort to demonize Geert Wilders. In the course of the program, the hosts deftly maneuvered their guest into the inevitable comparison of Mr. Wilders with Hitler.

Since then Geert Wilders has offered a response to Peter de Vries. According to De Telegraaf, as translated by VH:

Geert Wilders does not exclude the possibility that Peter R. de Vries is simply jealous of his political success. “Perhaps it still hurts him that he failed in politics,” the PVV leader said in response to the statements of the crime reporter. 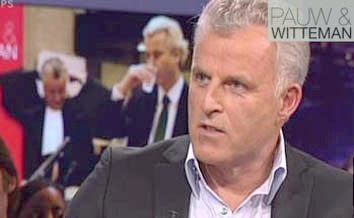 Wilders responds for the first time in the weekly Revu to the statements made by De Vries on his website and on television. The SBS6er called the PVV leader dangerous, a demagogue with the potency of a rabble-rouser, and evil.

“I do not take Peter R. de Vries seriously. I think he talks a lot of nonsense. Maybe it still hurts him that he failed in politics. Perhaps he is jealous. Maybe he needed publicity. But he has freedom of expression, even though he talks nonsense,” Wilders says in Revu.

“For me he is an insignificant person. I read his comments, think a bit about them, and then go back to work. For that is why people have elected me. Not to comment on Peter R. de Vries, but to fight [Prime Minister] Balkenende and his associates”.

One thought on “The Freedom to Talk Nonsense”