“They laugh at our legal system.”

Our Flemish correspondent VH has translated an article from DePers about the war zone that has developed in the immigrant ghettoes of Brussels:

Officers are being shot at, robberies are a daily occurrence. Arnold Karskens went to have a look at “the new Beirut”. Which is in Brussels. 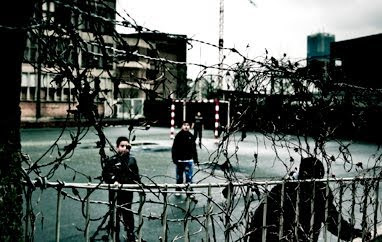 The white police van stops for a moment in the Liverpoolstraat in Brussels, notorious for its illegal car dealers. In gaping dark rooms cars quick as lightning have their number plates changed or within a few hours are completely dismantled. But the police van is not lurking for the illegal Africans who rushed into the shadows. Too dangerous. “We don’t have bulletproof vests,” the driver says. “I say can’t say anything further, even though I know enough for you to easily fill four pages.” His partner nods: “I am risking my life every day. The money for the police is spent on bureaus, not to work in the field.”

“This is the new Beirut,” says Frederic Erens, member of Vlaams Belang. He points to the garages. “No tax inspector will go in here. The last one was twenty years ago and has never been seen again since.”

We walk through his old neighborhood in Brussels-West. The reason is the war situation in Brussels that began last week when a fugitive criminal, after a raid at a Lidl supermarket, was shot by pursuing officers. Followed by another raid on a money-exchange office. A police officer got three bullets in his leg. The weapons used were automatic Kalashnikovs, a notorious assault weapon. The 7.62 mm bullets easily pierce the light armored police cars. The former deputy did foresee this. “Last year four thousand rifles arrived from Chechnya. They start at €200 and can even be rented for €50 a day.” The influx of the murderous weapons has been leaked by the Brussels police leadership themselves. Justice Minister Stefaan De Clercq does not want to make announcements, because of the ongoing investigation.

The bazaar for the merchandise is, among other places, Kuregem, part of the Brussels district Anderlecht. The outdated and cheap housing in the impoverished neighborhood close to the city center acts as a magnet for fortune seekers from Eastern Europe and illegal aliens. Street Robberies are common. Criminals sabotage the street lighting so as to slip away easily into the darkness. Traffic lights in narrow streets are disabled. “The municipality did that themselves. Because motorists who stop at a traffic light at night will have their windows smashed and their passengers robbed.”

According to Erens there is also a political battle going on in the “quartiers chauds” [hot areas] of Brussels.” The riots often begin on Friday afternoons when the youth are incited in the mosques.” There are dozens, some of them illegal. And maybe we should view the submachine gun in the same way. In order to create chaos in the capital of Europe. And to stay with war terminology: The risk of collateral damage is great, because they are not professional criminals, but youth who shoot instantly from anxiety. Even the left-wing parties like Green and the Flemish Socialist SP.A argue for zero tolerance, with a fine for any violation. Erens can hardly suppress a grin. “We said that as long as twenty years ago. Brussels in the meantime is not a multicultural but a pluri-cultural society. It is them against us. The racism of foreigners against Europeans. They laugh at our legal system.”

An elderly Moroccan, “for twenty years a resident of Kuregem”, stops. He also has seen the neighborhood go down: “The youth, huh.” He does not want to talk further.

In the evenings heavy the heavy rain and potholes in the streets filled with melted snow make Kuregem even more depressing. Few dare to go out after sunset. In the dimly lit Tavern Pony Express on the Albert I Square, Rashid (29) looks searchingly at the visitor’s face. He is please to be able to tell about the side the finger is pointed at. “We are the victims. All problems stem from the police. The younger officers especially show no respect. At checkpoints they stand like cowboys in front of you with drawn gun.” That makes you become furious, he wants to add. In a corner behind a laptop some guests swear about the police force. “They are racists.” Of robberies and drug trafficking, which mainly the young Moroccans are blamed for, they know nothing about. Even though the Gondelsflats [Gondola Flats] that are notorious for robberies are just around the corner, and a school in the neighborhood closed its premises because of the robberies against its students.

The next day it is striking that shrubs sometimes grow in the roof gutters. A store advertises traditional Berber outfits, a long jalaba for €15. A black pulp on the pavement shows where plastic garbage bins once stood.

In the Flemish Renaissance town hall with beautiful stained glass windows, Mayor Gaëtan van Goidsenhoven makes a little time for an interview. The Walloon Liberal (36), likes to point at the glory days, when Anderlecht had major industrial sectors and cattle halls and attracted many traders. “Then the poor people came, and the government paid no attention to this area anymore,” the young mayor says, who holds sway over 80 nationalities, although there may be even more.

He can only confirm the seriousness of the situation. In November the police station under the town hall was fire-bombed to ashes. It is still closed down. In the evening the police only patrol in certain streets with two vans. “Criminals want to create a territory for their trade in drugs, stolen cars, and nowadays also weapons.” And that works nicely.

He estimates the number of criminals in central Kuregem, which has some 19,000 inhabitants, at a few dozen. But apart from them, 200 to 300 youngsters also cause serious inconvenience. Youth unemployment is 45 percent, but compulsory education creates problems in addition. “For minors who commit offenses, there is often no prosecution by the judiciary. The feeling of impunity is very strong.”

Kuregem is at crossroads, Van Goidsenhoven sates; the district will either disintegrate into a real ghetto, or it will find a future. “We have the potential, being so close to South Station and the European institutions.” He shows drawings with futuristic flats. “But we need more of a mix, now there is too much poverty, too many social problems and poor and old buildings.”

The pavement in front of the hall has, however, been renovated now.

12 thoughts on “The New Beirut”