There’s been a lot of chat floating around American cyberspace about the mysterious, larger-than-life appearance of George W. Bush on a Minnesota billboard advert. In the photo, he is smiling (or as the Left says, “smirking”) and waving. The caption reads “Miss Me Yet”?

At first, there were rumors that the billboard was merely a photo shopped hoax (“Are We Lumberjacks”, anyone?) but the sign turned out to be quite real. What is surreal is its appearance in Minnesota, Land of a Thousand Lakes – not to mention a bajillion leftists, and the taxes to go with them. Among their Congressional representatives is Keith Ellison, the only Islamist representative so far. And in the Senate they have the gracious Al Franken, an exemplar of Democrat civility.

That’s why many people thought it was a hoax. Who in Minnesota would actually pay for such a billboard advert? A partial answer was easy enough to track down:

“The ad was purchased by a group of small business owners who wish to remain anonymous,” [Mary] McNamara [general manager for the Minnesota branch of the billboard company] said. However, McNamara did offer this political bombshell: “Some of the people in the group who paid for this were Obama supporters.”

McNamara told us that the message the group hoped to convey was one of “Hope and change, where is it?” She went on to say that she has yet to receive any negative feedback about the ad, which has been up for about a month, and added that some have even contacted her office offering to donate money to keep it up.

However, not everyone is buying McNamara’s portrayal of the group’s ideological makeup. Cindy Erickson, the chairwoman of the Democratic Party in Chisago County, where the billboard is located, suspects the ad’s funders are conservative activists posing as Obama supporters.

“I don’t have any idea who did it, but my thought was that they’re Tea Party people,” she said.

But of course. Anyone who isn’t for Obama is, by default, one of the “Tea Party people”. Either that, or they’re Sarah Palin supporters. What other answer could it be if you’re a Democrat?

While Minnesota has long been a blue state, Chisago is part of a Republican-leaning string of suburban counties surrounding Minneapolis and St. Paul, and Obama lost the 2008 vote in Chisago by 10%. But Erickson argued that local Democrats who voted for him are content with the job the president is doing.

Hmmm…these “contented” voters in Chisago are obviously among the 27% of the nation’s voters who “strongly approve” of Obama’s performance. They trail the 39% who “strongly disapprove of the president’s showing to date.

Even the people who think Obama is a failure aren’t anxious to return to the days of George Bush. Many people consider Obama to be Bush on steroids without the social skills; they’d rather see another kind of billboard, perhaps something like this, from Malkin’s page. She calls it “ a better miss-me-yet” billboard: 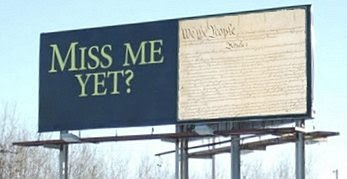 Michelle Malkin also has a succinct inventory of reasons for not returning to the bad old days. As she says, “sorry to be a wet blanket” but except for the post 9/11 war footing, there’s not a lot to render one nostalgic:
– – – – – – – – –
Here’s her list of Bush’s sins, all nine of them [go to her website for the links in each enumeration]:

1) joined with open-borders progressives McCain and Kennedy to try to force shamnesty down our throats;
2) massively expanded the federal role in education;
3) championed the Medicare prescription drug entitlement using phony math;
4) kowtowed to the jihadi-enabling Saudis;
5) stocked DHS with incompetents and cronies;
6) pushed Hillarycare for housing;
7) enabled turncoat Arlen Specter;
8) nominated crony Harriet Myers to the Supreme Court;
9) pre-socialized the economy for Obama by embracing TARP, the auto bailouts, the AIG bailout, and in his own words:
“I’ve abandoned free-market principles to save the free-market system.”

I wasn’t aware of the last quote, but it certainly rounds off his missteps during his tenure. The only other thing I’d add is partially related to #5: Bush was loyal to his people long past their sell-by date. Rumsfeld comes to mind.

I voted for Bush the first time to save us from the fate of being governed by Al Gore. Like many others, my vote was “against the other guy”, for Gore was a whacko who believed that we needed to be rid of the internal combustion engine, a prevaricator who claimed he invented the internet, a malodorous left-over from Clinton’s Shame. In comparison, Bush seemed to have had a fairly good record as governor of Texas; certainly he served with a lot more integrity than Gore had exhibited as Bill Clinton’s vice-president. With Gore in the catbird seat for two terms we’d already be living in the poverty of cap and trade while his ‘green’ hysteria and hypocrisy continued unabated.

The second time around, what the Dems offered was even worse than their first run at Bush. The feckless, reckless John Kerry was, and continues to be, an immature hate-America-first elitist, following in his father’s footsteps. There’s one sour apple who didn’t roll far from that poison apple tree. Of course, with Kerry in office, we’d have had entertaining Nixonesque drama queen exchanges with the press. The man is thin-skinned enough to be one of the Professionally Aggrieved.

But yeah, I sure don’t want to roll back to Bush. I wouldn’t mind fast-forwarding past President Obama, though. In fact, I’d — gulp — take Gore over Obama. No, on second thought, maybe Kerry instead. Uh, no, make that Gore. Umm…

Ugh. What a Morton’s Fork!