The Flemish separatist party Vlaams Belang came out in support of Geert Wilders yesterday. When Mr. Wilders’ trial started, VB was demonstrating in front of the Dutch embassy in Brussels.

According to De Telegraaf, as translated by our Flemish correspondent VH: 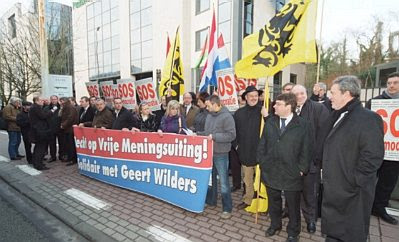 BRUSSELS — The leader of Vlaams Belang, Filip Dewinter, demonstrated against Wilders’ trial on Wednesday morning outside the Dutch Embassy in Brussels. With his supporters he waved signs like “SOS democracy” and also Dutch and Flemish flags. 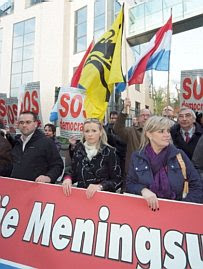 Dewinter believes that Wilders should be allowed to make his statements, with an appeal to freedom of expression. “Freedom of speech is the cornerstone of our society,” Dewinter said through a megaphone. He recalled that his party had to set up a new party, after judges had banned Vlaams Blok on racism charges (in a political process).

The demonstration drew about 75 Vlaams Belang supporters. Senator Anke Vandermeersch (VB), former Miss Belgium: “I do not always agree with Wilders, but still am of the opinion that he should be able to express his opinion.” (source)

Many thanks to Vlaams Belang for sending the photos.