How many times have you heard that “Vlaams Belang is a fascist party”?

How many times have you read that “Filip Dewinter is a neo-Nazi”?

It’s a persistent and pernicious meme. It has no basis either in history or current events, but it became the “dominant narrative” back when Vlaams Belang was still Vlaams Blok, and it is a lie that simply will not die.

Time for a reality check. Take a look at this photo one more time:

Tell me, who are the fascists in this picture? Who wears the jackboots?

I bring all of this up because of a piece that appeared a couple of days ago in The New York Times Magazine. The article is part of the “strange new respect” accorded to Charles Johnson by the Leftist media since he repudiated the last of his erstwhile friends on the Right.

Most of the article covers the same old ground, recounting the Great Blog War of 2007 from a distinctly Johnsonian perspective. But that’s not what interests me. As a part of his research, the author interviewed Pamela Geller and Robert Spencer about what happened back then. Here’s where the relevant portion begins:

IN OCTOBER 2007, Johnson was asked to take part in what was billed as a Counter-Jihad Conference in Brussels, a gathering of fewer than a hundred politicians and opinion leaders from around the world who convened to share ideas and strategies for combating the spread of militant Islam. Johnson was not the only writer invited — Geller was there, as well as Robert Spencer of jihadwatch.org (a Web site Johnson himself designed), to name two — but he did not go. “I’m just not a joiner of these things,” he says.

A couple of points here: I was one of the organizers of the Brussels event, and I was the person who wrote to Charles Johnson to invite him. No one else communicated with him about the conference ahead of time. Although he normally responded to my emails back in those days, he never replied to any of the several that I sent him about Brussels.

We went ahead without him, and Mr. Johnson’s first response was the broadside attack he launched against us the same evening the conference concluded.

The conference finished up in Brussels, and “the next day,” Johnson remembers, “people were e-mailing me saying, ‘You might want to cover this.’ So I started looking into it.”

Yet another suggested correction for Charles Johnson: his attack on Vlaams Belang began the same day, just hours after the conference concluded, and almost as soon as my wife sent him the press release about it.

He discovered that among the conference’s 90 or so participants — though not among the speakers — was a man named Filip Dewinter, a leader of a Belgian-nationalist political party called Vlaams Belang, or “Flemish Interest.”

Johnson first hinted, and eventually demanded, that [Pamela Geller and Robert Spencer] publicly distance themselves from both Vlaams Belang and the conference itself, and when they demurred, he publicly distanced himself from them.

“Filip Dewinter has said some things I deplore,” Spencer says. “But I don’t consider myself responsible for him just because I was at this conference and he was, too. That’s an outrageous kind of guilt by association. Let me ask you this: a few years ago I spoke at a Yom Kippur service, and one of the other speakers was Hillary Clinton. Does that make me a supporter or her work, or her of mine?”

It pains me to say this, but Robert Spencer has inadvertently done a great disservice to the Counterjihad movement with his words.

First of all, Filip Dewinter was indeed a speaker at the conference in Brussels: he gave the country report for Belgium. I sat on the podium with him while he spoke.

Secondly, to assert that there is some “guilt by association” with Filip Dewinter is to give credence to the idea that the Vlaams Belang leader deserves the “fascist” smears that have been so frequently aimed at him.

Of what, exactly, is Filip Dewinter “guilty”? 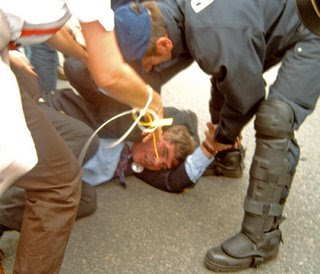 Any association with Filip Dewinter is actually an honor, for the man is a hero. He belongs in the same class as Geert Wilders or Pia Kjærsgaard. To imply an equivalence with even Hillary Clinton is an insult to the man.

There is nothing that Filip Dewinter has said that I would “deplore”, and the fact that he keeps a Celtic Cross on his bookshelf bothers me not in the slightest.

If the world were a fair place, Vlaams Belang would be held in the same esteem as the Partij Voor de Vrijheid, and Filip Dewinter would be standing shoulder-to-shoulder with Geert Wilders. But, unlike the PVV, Vlaams Belang grew out of Vlaams Blok, which gives it a pedigree that can be traced far enough back that the Left can cry, “Ha! Gotcha, you Nazi!”

The equivalent in American terms would be the Democratic Party, which has its roots in Reconstruction and Jim Crow and racial segregation. The Democrats have a pedigree that can be traced far enough back — say, to 1960 — that we can cry, “Ha! Gotcha, you RACIST!”

However, I subscribe to the principle of “By their fruits ye shall know them.” And Vlaams Belang is the only political party in Belgium that has strongly and officially and consistently supported the state of Israel.

Filip Dewinter was the only national Belgian political leader to speak out publicly in Parliament on behalf of Belgian Jews this time last year, when the Left marched with Hamas supporters on the streets of Antwerp chanting “Jews to the gas”.

Vlaams Belang is the only political party in Belgium that takes a libertarian stance and supports a free market economy.

To refer to them as “fascist” or “neo-Nazi” is not just inaccurate, it is a travesty of the truth.

The uncomfortable fact of the matter is that anti-Semitism is indeed alive and well in Belgium, but 99.5% of it is confined to the hallowed halls of the Socialist Left. To assert otherwise is to ignore the plain truth that can be easily discerned by reading the copious public record.

It’s time to stop ducking for cover every time the topic of Vlaams Belang comes up. Just because thousands of others believe the same lie doesn’t mean that we have to support their statements or give them cover when they promote falsehoods.

It’s better to be a lone dissenter speaking the truth than to join a crowd of people who are screaming lies.

For those who want to acquaint (or re-acquaint) themselves with what occurred at Counterjihad Brussels 2007, the official report is here, and my more anecdotal account of the occasion is here.

29 thoughts on “The Meme That Would Not Die”