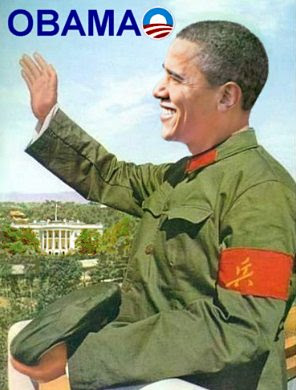 Anita “I was only joking” Dunn is not the only Maoist among the Obama troops, but like a good Commie, she continues to proclaim her innocence:

Standup comedian Anita Dunn, who doubles as President Obama’s White House communications director, now claims she was only joking when praised Mao Zedong by calling him “one of the two people that I turn to most…”

Hilarious! There have to be 70 million murdered Chinese rolling in the aisles! What a knee-slapper.

These Little Red Book readers seem to be popping up everywhere. The longer you research the connections, the more rocks you look under, the pinker our Dear Leader’s connections appear to be.

Now there’s a video from 2008, of Ron Bloom, Obama’s “manufacturing czar”, at a Union League Club meeting in New York:

“We know that the free market is nonsense. (…) We kind of agree with Mao that political power comes largely from the barrel of a gun.”

So who is this Bloom guy?

“He has a long history of being the negotiating face of unions in a suit. He is a Harvard Business School graduate who has worked for the unions beginning with [the Service Employees International Union] SEIU for decades.

Most recently, SEIU thugs were taped assaulting an Obamacare opponent at a town hall meeting. Bloom’s approving citation of Mao comes as no surprise. Other SEIU bigwigs have boasted about the longstanding ties between the Union and the Communist Party.

From Discover the Networks:

At a March 2007 meeting, Local 1199’s executive vice president Steve Kramer spoke enthusiastically about the role which the Communist Party USA played in building up his union. When the Communist Party split in 1991, several Local 1199 officials took many comrades into the breakaway group, Committees of Correspondence. One of those officials, Rafael Pizarro, also went on to help found the New Party, a Marxist organization that Barack Obama joined in Chicago in 1995.

Drilling down further, where can we get some information on the New Party? Look at this, they’ve been following Obama’s footprints for awhile:
– – – – – – – – –

This post is for journalists who care about the future of their country more than their careers.

I have previously posted about Barack Obama’s involvement in the socialist led Illinois New Party here, here and here.

Below are scans from New Party News Spring 1996.

They prove that Barack Obama was a member of the Illinois New Party and was endorsed by them in his 1996 Illinois State Senate race.

Go to the link and look at the pictures. Obama is becoming far more transparent than he’d planned.

The New Party was the creation of the quasi-Marxist Democratic Socialists of America (DSA) and the radical community organisation ACORN. The Communist Party splinter group Committees of Correspondence (CoC) was also involved.

I quote from Chicago DSA’s New Ground of September/October 1995:

Another website discusses Obama’s connections, ones he denies or refuses to discuss. You think maybe he’s beating up on Fox News as a distraction?

The New Party, formed by members of the Democratic Socialists for America and leaders of an offshoot of the Community Party USA, was an electoral alliance that worked alongside the Association of Community Organizations for Reform Now, or ACORN. The New Party’s aim was to help elect politicians to office who espouse its policies.

Obama’s campaign last year denied the then-presidential candidate was ever an actual member of the New Party.

But as you can see from New Zeal’s detective work, above, Obama was active in a Communist offshoot that was aligned with ACORN. They have images of newspaper stories to back up their assertions.

And then there are Obama’s connections to Demos, which is the group that gave him the lately-departed Van Jones. Here’s a telling explanation for the whole web of connections. Some of the links below are ones I researched. Others proved harder to find easily. Any of them that you find can be linked to as the post is updated:

One organization unites Barack Obama, Van Jones and Chuck Collins: Demos, a Fifth Avenue New York based think tank. A little known, but highly influential organization, Demos is a key component of the “progressive” machine that brought Obama and the Democrats to power in 2008. Besides being Director, Program on Inequality and the Common Good, at the Institute for Policy Studies, Chuck Collins works for Demos as Director of the Tax Program -Business for Shared Prosperity.

Incidentally in the mid 1990s, Collins was one of several IPS people who helped organise the New Party-which Obama joined in 1995 in Chicago.

Van Jones serves om the Demos Board of Trustees.

So where does Obama fit in?

Demos began as a vision of Charles Halpern–then the president of the Nathan Cummings Foundation and a veteran non-profit entrepreneur. He was troubled by the narrow conversation about America’s future. On the eve of the 21st century, it seemed that America no longer had the imagination to tackle its largest problems and build a more just society.

Halpern set out to challenge the status quo with a new institution. He envisioned a dynamic hub for creative scholars and cutting-edge practitioners–an organization that combined ideas and action to chart a new set of priorities for America.

By 1999, Halpern had assembled a talented working group to develop Demos. Among them were David Callahan, a fellow at the Century Foundation; Rob Fersh, a long-time policy advocate; Stephen Heintz, Vice-President of the East-West Institute; Sara Horowitz, founder of Working Today; Arnie Miller, a leading executive recruiter; Barack Obama, then a state senator from Illinois; David Skaggs, a congressman from Colorado; and Linda Tarr-Whelan, an internationally recognized expert on women and economic development. This working group would eventually form the core of Demos’ staff and Board of Trustees.

The question here is obvious. Why would an obscure Illinois State Senator with a funny name be “cherry picked” to help set up a new “think tank” in New York?

All the others had track records: Heintz was even a member of the “prestigious” Council on Foreign Relations.

One possible connection was Obama’s work in the early 1990s leading Illinois Project Vote and his strong connections to the radical community group ACORN.

In fact the three organizations could be said to be almost “partners.”

Demos Fellow Lorraine Minnite serves on the Project Vote board.

Demos President Miles Rapoport was one of ACORN’s most ardent defenders when the organization was accused of widespread voter registration fraud during the 2008 election. Another possible connection is through the Institute for Policy Studies (IPS) itself.

In the 1960s Halpern became corporate secretary to IPS. He began to attend IPS seminars and parties at the Institute and at the home of founder Marcus Raskin, where he mixed with radicals such as Paul Goodman and Ivan Ilich.

When Raskin and several other activists were arrested for conspiring to obstruct the military draft during the vietnam War, Halpern helped with their defence. Halpern even flew with Raskin to a meeting with the other defendants and their lawyers at the Greenwich Village home of radical lawyer and secret Communist Party USA member Leonard Boudin-father of future Weather Underground terrorist Cathy Boudin.

Halpern later served as as president of the left leaning Nathan Cummings Fund which was a significant IPS donor.

In 1979 Don Rose, a mentor to Obama’s right hand man David Axelrod served in the leadership of the IPS spinoff Conference on Alternative State and Local Policies, with Miles Rapoport.

The four founders of Progressives for Obama-Barbara Ehrenreich, Bill Fletcher Jr, Danny Glover and Tom Hayden all have IPS ties.

Ehrenreich is an IPS Trustee, Bill Fletcher Jr is an IPS Scholar, both are members of Democratic Socialists of America and both helped found the New Party.

Danny Glover chairs the board of IPS “partner organization” TransAfrica Forum and Tom Hayden is a long term IPS associate, going back to Conference on Alternative State and Local Policies days.

Even Saul Alinsky, the Chicago radical who’s methods Obama learnt in his “community organizing” days was an occasional IPS lecturer back in the 1960s.

Seven years ago Van Jones was a San Francisco hardcore Alinskyite street communist. After hooking up with the Committees of Correspondence for Democracy and Socialism, Democratic Socialists of America, former ‘60s Maoists, Weather Underground supporters and Demos he managed to land a job in the White House.

That’s quite a mess o’ grubs under that rock.

Thanks to the Baron for creating my Obamao image. Maybe the President can use it in his next election campaign. You know, the one where he finally tells the truth.

[Afterword from the Baron: What next election?]