Our Swedish correspondent LN wrote recently about the latest attempts by the Swedish ruling class to squelch the growing popularity of the anti-immigration party Sverigedemokraterna (the Sweden Democrats) and their leader, Jimmie Åkesson. For the last two days the Swedish newspapers have been droning with high-minded invective against SD and their policies. 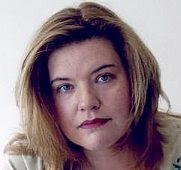 Today comes word from Ann-Charlotte Marteus, a Swedish journalist and radical feminist who writes for Expressen and happens to hate the Sweden Democrats with a passion. Her signature line in her op-eds is “DAGENS FEL / Sverigedemokraterna”, or “ERROR OF THE DAY / The Sweden Democrats”, in the tradition of Ceterum censeo Carthaginem esse delendam, except from a Scandinavian Socialist perspective. No matter what she writes about, she makes sure she kicks Sverigedemokraterna at the end.

LN sends this brief report with the latest translated excerpts from the virtual pen of this estimable woman:

She finishes her defaming slander article with:

The rest of their policies are perfume, calculated to conceal the stench.

Once again we hear the tiresome mantra of the Socialist establishment, which inevitably paints conservatives as Nazis or fascists. Considering the Antifa goons who take to the streets to beat up their opponents on behalf of the fascist Left, one can only assume that Ms. Marteus is engaging in a bit of projection.

Another term evocative of Adolf Hitler and the Third Reich is the reference to “the stench” of the Sweden Democrats. Hitler was notoriously obsessed with ordure, and characterized his political enemies and the Jews as offal and excrement whose smell pervaded Germany. The National Socialists were the means by which the nation would be cleansed of such “filth”.

Oh yes, there’s definitely an odor in the Swedish air these days, but the Sweden Democrats are not responsible for it.

It emanates from the ruling mandarins of the Socialist Left. And it’s the all-pervading odor of sanctimony.

Thanks to Henrik Ræder Clausen for providing background material.