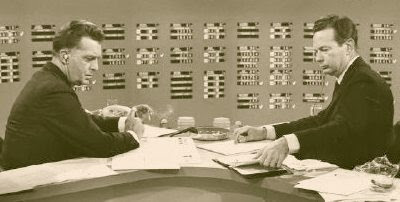 I’m about to pay a brief visit to territory that most of our readers would rather not re-enter: the Little Green Footballs imbroglio of late 2007 and early 2008.

Yes, I know — the mud in that field has been churned up so thoroughly by now that there’s no earthly reason for us to set foot in it again. But bear with me: there’s actually a method to my madness. 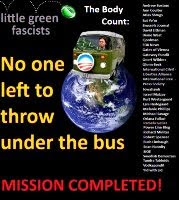 Recent events have brought the decline of Little Green Footballs into sharper focus. In the last couple of months Charles Johnson has pronounced anathema against the few remaining blogs — including Power Line and Iowahawk — that he had once held in high esteem.

As Tundra Tabloids says, “Mission completed! No one left to throw under the bus!”

As longtime readers will recall, the trouble began on October 19th, 2007, at the conclusion of the Counterjihad Conference in Brussels. At that time all of us still assumed that Charles Johnson was a friend of our movement. He had been invited to the conference, and we kept him apprised of what we were doing.

When Dymphna and Pamela sent him our press release about the event, he immediately began attacking the Belgian party Vlaams Belang (Flemish Interest) and Sverigedemokraterna (the Sweden Democrats) for their participation. Several LGF commenters were primed and ready with disinformation provided by such extreme Left sites as Yelloman, Blokwatch, and EXPO. Charles Johnson used their material uncritically, without doing due diligence on it; in fact, he seemed to accept it at face value without any checking at all.

For details concerning the accusations and our refutations of them, see “Suggested Corrections for Charles Johnson”.

Unfortunately, although it took Mr. Johnson but a moment to paste in any given tidbit of disinformation, it took five people on the CVF team six weeks to research, document, and prepare the refutations. By that time (mid-December), Gates of Vienna, Atlas Shrugs, and the Brussels Journal had been excommunicated from Little Green Footballs. Robert Spencer — who had been one of the speakers at the Brussels Conference — was put on probation by LGF, and distanced himself from all the other bloggers who had attended Counterjihad Brussels. Many of the “lizardoids” (registered commenters at LGF) were banned during this time for daring to voice opinions contrary to those of the blog’s owner.

The blog wars raged on sporadically for the next year and a half. A partial side effect was our expulsion from Pajamas Media the following spring. Our blog and Pamela Geller’s became outcasts in some sections of the American blogosphere.

That was a sign of how much influence Charles Johnson wielded back in those days.

As his shift to the Left continued, more and more blogs earned his disapproval, and further legions of commenters were banned. Eventually it became apparent that something was not quite right with LGF, as Andrew Bostom was cast into the Outer Darkness, and early this year Jihad Watch fell to Charles Johnson’s scythe.

Over the last several months the process has accelerated, with Geert Wilders, Oriana Fallaci, Gateway Pundit, Michelle Malkin, Hot Air, and finally Stacy McCain and Dan Riehl being declared racists, white supremacists, fascists, neo-Nazis, and all the other epithets favored by Charles Johnson when describing his enemies.

His metamorphosis now seems to be complete: he is an unabashed Leftist who has repudiated all his former allies on the Right, and spends most of his time attacking Glenn Beck, Christians, tea party protesters, “bigots”, “wackos”, “birthers”, “white supremacists”, Ron Paul supporters, and anyone who criticizes Barack Hussein Obama.

That, in a nutshell, is the story of the Great LGF Blog War. Charles Johnson’s stature has declined to the point where those who used to remain silent — presumably out of fear of the damage he could do — are now openly discussing his “descent into derangement”.

And they were right to fear the damage he could do. He and PJM helped reduce our traffic for most of a year, and I assume that other blogs had good reason to expect similarly negative consequences if they dared to challenge him publicly.

Then there’s the prospect of that “racism” charge. The baleful influence of politically correct ideology is so pervasive and so complete that even the most stalwart conservative lives in dread of being labeled a “racist”. Once the charge is leveled, it tends to stick, and becomes all but impossible to remove.

As a result, much of the American blogosphere assiduously avoided the LGF conflict.

If the Europeans paid any attention at all to Little Green Footballs, they viewed it with amused contempt. It was obvious that Charles Johnson was ignorant and misinformed about Europe and European political affairs.

To LGF the most dangerous and worrisome trend in Europe is the rising influence of “neo-Nazism”, which to any European outside of the hard Left is a laughable proposition. Neo-Nazis — in Europe and elsewhere — find their natural Jew-hating allies among Muslims, and not in the Counterjihad. Anti-Semitism is indeed rife in Europe, but it is overwhelmingly a product of the socialist and anarchist Left.

The neo-Nazis are a joke, a gaggle of fringe nut-cases massively infiltrated by state intelligence agencies. Nobody but an ignorant American blogger (or EXPO) could take them seriously.
– – – – – – – – –
However, even though the Europeans considered him irrelevant, Charles Johnson was still capable of damaging the transatlantic Counterjihad. His attacks on Lionheart made it that much harder for the English blogger to gain the support he needed in his struggle against persecution by the corrupt British police. Many useful connections between the USA and Europe were at least temporarily damaged or severed. One of the reasons that Vlaams Belang still struggles to gain the same kind of international acceptance granted to Geert Wilders’ PVV is the “neo-Nazi” slander aimed at the party by the European Left, with Charles Johnson acting as its American spearhead.

Charles Johnson’s attacks on his enemies were of the sort generally favored by the Left: guilt by association, innuendo, quotes taken out of context or mistranslated, and outright falsehoods. One of his favorite techniques was to post photos with descriptions of their significance supplied verbatim by the disinformation artists who used him so effectively.

Some photos — the cross on the bookshelf, the cartoon rat, etc. — depended on tendentious interpretations for their allegedly damning impact, but others were incorrectly labeled with spurious factual attributions.

To state it plainly: the descriptions of the photos were outright falsehoods, whether intentional or otherwise. Either Mr. Johnson was gulled by agents of the European Left, or he knowingly chose to label the photos falsely.

One such photograph was of Tina Hallgren Bengtsson in a Nazi uniform, which LGF claimed was taken at a Sverigedemokraterna rally. This was patently false, and the misattribution was relatively easy to verify.

Another example was a photograph of a “white power” flag which Charles Johnson said was taken at a “Vlaams Belang rally”, when in fact the event was a VJW (Youth of West Flanders) rally, and had nothing whatsoever to do with Vlaams Belang.

Sometimes even prominent bloggers make mistakes. But Rule #1 of blogging is to correct all errors promptly and post retractions. A blogger’s credibility supposedly hinges on such prompt corrections.

To this day, Charles Johnson has not corrected or retracted these two factual errors, nor any of the others.

And, strangely enough, his credibility hardly suffered at all. His star didn’t begin its descent until he picked fights with some of the big guns in the American blogosphere. Now — two years later — he is finally recognized as a retailer of smears and falsehoods.

Charles Johnson made his substantial reputation back in October 2004 as one of the major bloggers who helped discredit CBS, Dan Rather, and the forged “Killian Memo”. Now, five years later, he has been brought low by the same sort of behavior — including using a blatantly doctored photograph in an attempt to smear Filip Dewinter — for which he so rightly pilloried CBS.

He has become the Dan Rather of the blogosphere.

Back in those heady days when political blogs first came into their own, the bloggers promised the MSM that they would “fact-check their a**.”

But what about the major blogs? Who will fact-check their a**es?

The answer, in a word, is: nobody.

In December 2007, after I posted the “suggested corrections”, I wrote to most of the major American blogs and requested that they take a look at the documentation we had amassed. I asked them to help us hold Little Green Footballs to account.

It was true that looking into the matter would take a bit of work, and that not all of the source documentation was in English. Still, we had laid everything out in a clear and concise fashion, and checking our work would have been no more arduous than, say, investigating the fonts used in 1972 models of electric typewriters.

But none of them answered my request. No one dared to fact-check a fellow blogger.

I won’t venture an opinion as to why any particular major blogger was unwilling to tackle the blatant falsehoods peddled by Little Green Footballs. I only know that Gateway Pundit, Hot Air, Hugh Hewitt, Instapundit, Michelle Malkin, Power Line, and Wizbang, inter alia, declined to fact-check Charles Johnson.

Now, two years later, Little Green Footballs has jumped a whole lagoon full of sharks. Charles Johnson has become a laughingstock. He is a safe target, and everyone feels free to pile on.

But where were the same people two years ago? Except for Lawrence Auster, Atlas Shrugs, and Gates of Vienna, none of the medium-to-large American blogs was willing to bell the LGF cat.

Remember: even Robert Spencer declined to dissociate himself from Charles Johnson until more than a year after the controversy — and then only after Mr. Johnson savagely turned on him.

And even now, when it has become totally safe to kick Little Green Footballs down the stairs, none of the major American blogs has seen fit to revisit the source of the original conflict, namely the “fake but accurate” material that LGF used against Vlaams Belang and Sverigedemokraterna.

No one seems inclined to state the plain facts: Charles Johnson smeared good people using outright falsehoods that were never withdrawn or corrected.

The winter of 2007-2008 was a disillusioning time. I discovered that all my heroes had feet of clay.

The people who so zealously pursued the truth where the MSM was concerned showed much less zeal when it came to policing one of their own.

An uncomfortable fact has emerged from all this: when blogs become as big as the MSM, they also become like the MSM.

Presumably in their hearts they’re just as dedicated to the pursuit of truth and the exposure of falsehood as they were when their readership numbered in the hundreds. But now they have additional considerations to take into account.

Who would risk all that by sticking his arm into the “racism” tar baby?

And now it’s all in the past, anyway. A footnote in a book of ancient history.

62 thoughts on “Becoming the MSM”