I received an email from an attorney in Illinois who tells me that the image capture of Mrs. Obama’s dealings with the disciplinary board is an innocuous document which simply records her voluntary withdrawal from the practice law in Illinois.

Thus, in keeping with blogger etiquette I have de-linked from the image capture and marked my statement as erroneous in the body of the post below.

The rest of the story remains. That is,

No doubt my fervent desire is no match for Hillary’s by-now wistful aspirations, but my sad what-might-have-been regret is running a close second to hers. Imagine what we’ve missed; the sheer entertainment value in the cat fights that would’ve have occurred between HRC and Nancy Pelosi were not to be. But had Hillary gotten the nomination and vote, it would have been Clinton vs. Pelosi, 24/7. Heck, since they’re going to take our bread away, the least the Dems could do is provide circuses.

But the reality remains: Hillary never stood a chance against the Chicago machine. When you consider the formidable power that the Clintons could muster, the fact that Obama wrested the Democrat nomination away from her speaks volumes about the gravitational pull of Cook County’s fierce Democrat political power.

Below the fold are the twenty-two intrepid souls who slave work for Michelle Obama.

Just to give you some perspective, here are the staff numbers for recent First Ladies:

…Hillary only had three; Jackie Kennedy one; Laura Bush one; and prior to Mamie Eisenhower social help came from the President’s own pocket.

But Michelle is married to the Magic Negro. She is the Negro American Princess.

[Our American readers will get the reference to Jewish American Princesses, also known as a JAPs. Personally, I enjoy ethnic jokes, including the usual stereotypes about the Irish. Ethnic jokes provide identity, which is something the prune-lipped politically correct will never understand. Much like Islam, the p.c. world cannot laugh at itself. Their problem.] 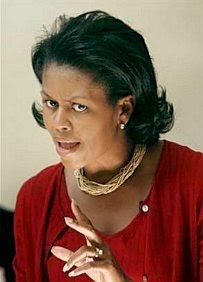 Even more than being a NAP, Michelle is a product of the Cook County political machine. Her whine about being a second-class citizen would be a joke were it not (a) such a big fat lie, and (b) so damaging to our social fabric.

As a product of crony politics, Michelle is adept at milking the public teat. Why wouldn’t she have twenty-two bureaucratic assistants? You can take the girl out of Cook County, but you can’t take machine politics out of someone who was raised on them.

Here are a few other interesting facts about Michelle:

The money listed is only salaries. It does not include those lush federal benefits, ones that private companies cannot match except for top executives in the financial industry.

Note: This does not include makeup artist Ingrid Grimes-Miles, 49, and “First Hairstylist” Johnny Wright, 31, both of whom traveled aboard Air Force One to Europe.

I sure wish she’d get a wardrobe consultant. Somehow, those strange argyle sweaters and the belts that she wraps around her outfits don’t quite pull things together. But what do I know? Good Will is my favorite haute couture.

I wandered around for this story. Here are some of the blogs I visited, just in case you don’t feel like going back and chasing them down in the post:

I thank all of them for their detective work.