Nazis are everywhere. Even with our “Nazi of the Week” feature I can’t keep up with them all.

The latest example can be found in the coverage given the Danish People’s Party by Jyllands-Posten. Take a quick look at this article from today’s English-language edition:

Political influence, not cabinet seats, will determine if the Danish People’s Party joins the government The power behind the throne in Danish Politics for the past eight years is ready to take on a more formal role, Pia Kjærsgaard, leader…

The power behind the throne in Danish Politics for the past eight years is ready to take on a more formal role, Pia Kjærsgaard, leader of the Danish People’s Party, has announced.

Kjærsgaard’s comment came after justice minister Brian Mikkelsen said he was open to the inclusion of the party, known for its ‘Denmark first’ policies, in the government.

‘There is absolutely no reason why the party can’t enter into a government one day,’ Kjærsgaard said…

But this is a revised version of the story. Thanks to Zonka, we can see the article as it was originally posted early this morning. Here’s a screenshot:
– – – – – – – – – 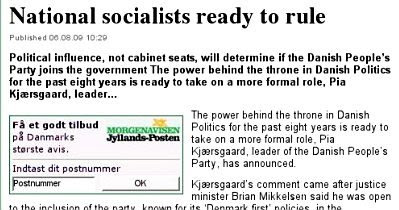 That a respected newspaper like Jyllands-Posten could stoop to such tactics should come as a surprise, but it doesn’t. These days the term “Nazi” is flung around so indiscriminately that it means nothing more than “someone who disagrees with the politically correct establishment”.

The fact that a mainstream outlet would sink this low is evidence of how frightened the elites are of the awakening resistance among the hoi-polloi. The media and the nomenklatura are desperate.

This is a sure sign that they have lost control of the flow of information, and they know it.

7 thoughts on “Beware of Danish Nazis!”