Paul Weston recently brought some videos of the Cargo-Bike Imam to my attention. The peripatetic imam is part of a humor feature on Dutch TV, only he doesn’t seem all that humorous to those of us who aren’t Dutch. The image of the little Dutch children bowing towards Mecca and then saying “Inshallah” is quite disturbing.

I asked our Flemish correspondent VH to help with translation and cultural background, and Vlad Tepes kindly volunteered to subtitle the videos. The first of the videos is included below, as part of a lengthy introduction to the Cargo-Bike Imam by VH. More videos will be coming up in later posts.

So now it’s time to meet the mystifying yet appalling imam.

Meet the Cargo-Bike Imam
by VH

The Dutch broadcast organization VARA (Association of Worker Radio Amateurs) was once a Socialist broadcaster and nowadays is a left-wing and “multicultural” outfit. A while back VARA invited a stand-up comedian named Najib Amhali — a Moroccan immigrant who is part of the self-appointed multicultural elite (and has been caught a few times plagiarizing) — to tape a TV show in eight episodes to be broadcast on Friday evenings. The scheduling of the program, in the evening after another popular program, attracted a reasonable number of viewers for the first episodes (1.3 million). Quite a lot of the responses were negative, even on his fan-site, and judged it worse than his shows on stage.

In every episode Amhali “wakes up from a dream and has a problem, each week on a different theme. In the program he looks for a solution. Sometimes he finds it, other times he doesn’t.”

In every feature Najib Amhali plays the role of the Cargo-Bike Imam in his item on Islam. According to the introduction to the series, this imam is “a children’s friend who crosses the country with fresh courage and the wrong ideas in his aim to convert people who stand open to his message. On questions like ‘Why do you never shake hands?’ and ‘Is it true that you throw gays from high rise buildings?’, the Cargo Bike Imam will always have a clear answer.”

One of the episodes was entirely about religion, and was broadcast a few days before Christmas. Amhali wakes up “from a nightmare in which Muslim girls, a Jehovah’s Witness, a Jew, and the devil [who offers him a beer] are tormenting him. He wonders which faith will offer him the most pleasant life before death,” as the introducton states.

To a taxi driver (with a Southeast Asian Muslim cap and prayer rug) explaining about reincarnation, and who tells him Islam is so aggressive, Najib answers: “Not that bad though, only to people who cannot shut their mouths.”

The text continues: “A clever fairground operator who travels around with his Wailing Wall, and a religious stand-upper who sings his Christian hit: How deep in the pit! In addition, Nadja [Najib dressed up as a middle-aged hooker] carries on with a Yugoslav with an unhealthy interest in the Pope [he shoots him].”

Apart from the Cargo Imam, who shows up in each feature, one sketch was a “faith, hope, and love-run” in an empty stadium. With a Muslim, a Catholic, a Jew, a Hindu, a Buddhist and a “non-believer”. They all shoot each other, and the unbeliever makes it to the finish. 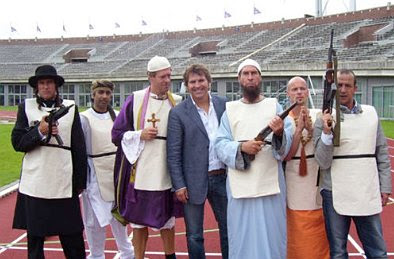 Left to right: A Jew, a Hindu, a Catholic, the producer, a Muslim, a Buddhist and a non-believer (Najib Amhali) in a stadium. 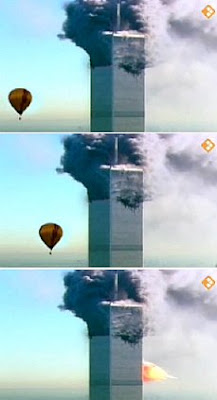 “My father is Jewish,” one of the passengers says.

Najib: “Oh then I guess I will have to pay for this balloon trip.”

“I was raised a Catholic,” the other passenger says.

Najib: “Hey, how often do you have to go down on your knees for the priest?”

The Catholic: “No sense of humor.”

At the end of the trip, the balloon crashes into the WTC.

At the Amsterdam PvdA-blog (Socialist, Labor), a commenter, Martien Penning, wrote an interesting opinion and analysis of this series of Najib Amhali underneath a PvdA article entitled “Stop the right-wing demagoguery”:

In the last fifteen years I haven’t had a quiet weekend. I have literally devoted every weekend of the last decades to the analysis of at least one multicul [“cul” meaning nonsense, crap] piece from one of the “quality” newspapers that particularly alarmed me. I am not the only one who after a few decades has the impression that somewhere in the Netherlands there is a hydraulic pump, which is continually busy pumping the multicul down the throats of the population. I do not exclude the possibility that the Dutch, whose intellectual and moral compass is still working normally, will at some point give up out of sheer exhaustion and bow to the spiritual dictatorship of a clique of the collaborationist left and Islam. Unless a combination of suicide attacks and economic crisis has not yet lead to an open civil war.

Everyone says that you [the writers of the PvdA article “Stop the right-wing demagoguery”] are of such very nice people. That makes it so difficult. Collaboration apparently happens with the best intentions, out of genuine ignorance, but the question here is how morally reproachable this ignorance can be. But you are not the only such very kind and lovely people in the Netherlands.

Najib Amhali is a lovely man. This week I was zapping along and came across the new TV program Najib Amhali, made by Peter Heerschop and Viggo Waas. And as if the devil played a game here, I ended up right in this program, exactly at the moment that at the Voltaplein in Amsterdam, small children came running out with the slogan “The Cargo-Bike Imam! The Cargo-Bike Imam!”

I know those children, and I know their parents. Watergraafsmeer District, that is the “Old South” [upmarket district] of East Amsterdam, all middle class living there, and they all have escaped the “old neighborhoods”, where the kind of “imam” that Amhali plays [in the Cargo Bike Imam] can be regularly admired in real life. Still, they easily and happily let their children be misused here for the innocent presentation of a belief that is the most stubborn reactionary force the world has ever produced.

Najib, dressed in reldeldella [jellaba] and with a pious cap on his head [a haji cap], played with hand puppets and taught the children the words “halal” and “haram” and had them make a beautiful religious gesture while saying “Bismillah”.

How aufklärend [informative] it would have been to have someone like Ayaan [Hirsi Ali] at that moment explain what “haram” means in practice, for women who live under this folly-religion.

Najib recently stated that according to him, hard jokes about Muhammad are not necessary. That is possible. You can conceal the gruesome truth about the prophet and his spiritual legacy, out of “respect” for all those pious Muslims and quasi-left-wing obscurantists who don’t want to know the truth. But it is a large step further to choose exactly the other side, namely the intentional verharmlosen [downplaying] of a hard, aggressive macho ideology that poses as a religion.

What is this ineradicable need with types like Peter Heerschop and Viggo Waas — because it is they who have written this top comedy — to increasingly radiate the idea that there is nothing wrong with Islam?

For their VARA program with Najib last week they had a VARA-promo at “Pauw and Witteman” [a PC reality TV show]. For one of their cabaret shows — which I can’t even stand to watch for ten minutes — they were had already advertised themselves on the very same “Pauw and Witteman” show a few weeks before. Peter Heerschop there managed to find a reason to produce the sentence “Yes, nowadays you already can be expelled because you have the wrong religion!” Perhaps Peter Heerschop should explain one day why Islam is such a good faith.

I still remember how Peter Heerschop, Viggo Waas, and the other intellectuals who belong to that company were glorified when they produced a stupid little book about Pim Fortuyn. I saw them bragging that summer, Peter Heerschop very appropriately in shorts. God, how full they were of themselves! How smart they were! Who said again, “Is there intellect needed to be able to recognize it in one another?”

Those kinds of heroes are always all over the Queen, Wilders, and Verdonk, but you hardly ever hear them about Islam. Well, you do hear them. You hear them expose their ignorance. That has to do with, I think, what Eddy Terstall [a PvdA dissident] called “cavil-racism”. Avant-garde, intellectual power players, cosmopolitans, and top artists like Peter Heerschop et al, address with affability their exotic fellow human and tell him — and her! — that the crazy repressive system they identify themselves with is all OK. “Halal” and “haram” have nothing to do with animals that are slowly bleeding to death, dehumanized women, and unbelievers that are brought to submission, but with the nice little talking puppets in the hands of Najib.

Najib is in his late thirties, Peter Heerschop and Viggo Maas in their late forties, but they still produce unfunny adolescent pranks and politically correct cabaret for the whole family. I sometimes wonder up to what age these men can keep wearing their short trousers and remain being hip-funloving about systems that destroy humanity. It is a form of intellectual hedonism that characterizes the whole fake-left. One succumbs to sentimentalism about the poor immigrants, those exotic people in our midst. The aim of the self-manifesting crowd is to expose oneself as a good human. The discovery of the hard truth, which would thereby disconcert their minds, does not come up here. “Positive” as they call it, but it is rather indolence, self-indulgence, pure immaturity.

Look here, now I have written a piece about how the world of multi-nonsense appears to me. And this way I can go on and on for many pages. But I don’t have the feeling that it helps. It is a matter of mentality and I am afraid that the so-refined-in-their-own-heads-brigades will only be able to face the reality after a much larger and more severe amount of misery.

9 thoughts on “Meet the Cargo-Bike Imam”