Based on his record to date, he is a partisan activist of the kind he deplored during his confirmation hearings. His reign at the Department of Justice is “all politics, all the time”.

Let’s start with the little things, like his own history in the Clinton administration. That should have been a warning, but since the Democrats rule the Senate, his previous conduct was evidently commendable. The Judiciary Committee fawned on him during his confirmation hearings.

It was Holder who negotiated the partisan deal worked out for Marc Rich’s pardon on the eve of Clinton’s departure. It was also Holder who shot down the recommendations of the career attorneys in the department not to release the sixteen Puerto Ricans terrorists. Thanks to Holder’s work, they went free:

Holder instructed his staff at Justice’s Office of the Pardon Attorney to effectively replace the department’s original report recommending against any commutations, which had been sent to the White House in 1996, with one that favored clemency for at least half the prisoners, according to these interviews and documents.

And after Pardon Attorney Roger Adams resisted, Holder’s chief of staff instructed him to draft a neutral “options memo” instead, Adams said.

“I remember this well, because it was such a big deal to consider clemency for a group of people convicted of such heinous crimes,” said Adams, the agency’s top pardon lawyer from 1997 until 2008. He said he told Holder of his “strong opposition to any clemency in several internal memos and a draft report recommending denial” and in at least one face-to-face meeting. But each time Holder wasn’t satisfied, Adams said.

The 16 members of the FALN (the Spanish acronym for Armed Forces of National Liberation) and Los Macheteros had been convicted in Chicago and Hartford variously of bank robbery, possession of explosives and participating in a seditious conspiracy. Overall, the two groups had been linked by the FBI to more than 130 bombings, several armed robberies, six slayings and hundreds of injuries.

Recently The Weekly Standard ran an essay by Jennifer Rubin on Holder’s current actions as the Attorney General. Let’s just say the tiger hasn’t changed his stripes. In fact, he has continued his old behavior even after his blatant lies before the Judiciary Committee during his hearings:

So now that Mr. Holder is in charge, how are things going? Ms. Rubin describes his behavior thusly:

[it] had been a longstanding position of OLC (the Office of Legal Counsel), dating back to the Kennedy administration, that federal voting rights for the District could not constitutionally be granted by statute. But Holder decided to change that:

Holder opted to shop around for another opinion. He went to the solicitor general, asking a lower threshold question, namely whether the solicitor general could “defend” the Obama administration if it signed a statute granting D.C. voting rights. Clint Bolick, a veteran of the Reagan Justice Department, observes, “I don’t recall [another instance] when the Department of Justice went back to get a second answer, when you have a ‘do over,’ when the best lawyers come up with the ‘wrong answer’ from a policy perspective.”

Another former Justice Department attorney finds the opinion shopping “extremely out of the ordinary.” “[OLC] is the last word on constitutional issues,” he explains. “Holder asked the wrong question to the wrong office and got an obvious, easy answer to satisfy his political agenda.”

This is from the same man who said with a straight face:

I will work to restore the credibility of a department badly shaken by allegations of improper political interference. Law enforcement decisions and personnel actions must be untainted by partisanship. Under my stewardship, the Department of Justice will serve justice, not the fleeting interests of any political party.

Yeah, sure. Some “stewardship”. He and Speaker Pelosi are running a close race for the most lies told in a single week.

There are lots more egregious decisions that have been made by this partisan hack. Perhaps the most telling is Holder’s handling of the racist thugs from the New Black Panther Party. Rubin says:
– – – – – – – – – 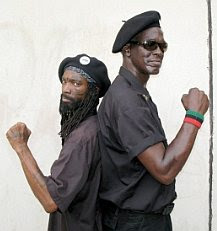 On Election Day 2008, members of the New Black Panther organization, dubbed by the Justice Department a “black-super-racist organization” were captured on videotape at a Philadelphia polling place. One wielded a nightstick. All wore the uniform and insignia of the organization. They made racial threats and hurled insults at voters. After the video made its way around the Internet, the voting rights section of the Justice Department’s civil rights division investigated. Additional evidence showed that the New Black Panthers had in Internet postings called for “300 members to be deployed” at the polls on Election Day. Bartle Bull, a veteran activist and civil rights attorney, filed an affidavit in support of the Justice Department, terming it “the most blatant form of voter intimidation I have encountered in my life in political campaigns in many states, going back to the work I did in Mississippi in the 1960s.”

A Justice Department complaint was filed on January 7, 2009, against the New Black Panthers national organization and the individuals present at the polls. Although the Justice lawyers urged the defendants (one of whom was a lawyer himself) to respond, they did not. The court then ordered the Justice lawyers to file a default judgment against the Panthers. Nevertheless, in an unprecedented move, the Justice Department in May dismissed the case against all defendants, save the single nightstick-wielding individual.

Rubin explains in detail the obfuscation of Holder’s minions in this case. She concludes:

One cannot read through the correspondence without concluding that Holder’s Justice Department is grasping at straws to defend a decision made for a purpose it wants to conceal. Positions never before used by the civil rights division have been tossed about, in contradiction of previous case law and department policy. While the Justice Department has cited the First Amendment rights of the Panthers, it had never before accepted such a defense in a case of voter intimidation. (Steve Rosenbaum himself once filed a voter intimidation claim against Jesse Helms and the North Carolina state Republican party for merely sending a postcard memo, normally quintessential protected political speech, which the department found misleading.) And while the Justice Department seems bent on coming up with excuses for the New Black Panther party, the department took an entirely different approach in Pima County, Arizona, where the presence of Minutemen legally carrying firearms on Election Day set off more than a half dozen visits by the Justice Department and multiple inquiries.[my emphasis-D]

Here we have the “only whites can be racists” philosophy in action. These “New Black Panthers” are but a variation on the same old haters and separatists that Bill Ayers loved and that Obama is fearful of offending. Thus, Holder will not prosecute them.

Enforcement of the law via qualified appointments in the Justice Department do not seem to loom large on the Attorney General’s agenda. Here are a few choice picks as delineated by Ms. Rubin:

This “no-politics Holder” lies like a (prayer) rug. I fear his prevarications may be a top-down problem.

Quin Hillyer sighs in The American Spectator at his failure to beat Ms. Rubin to the essay on Holder’s corrupt grasp of the Department of Justice:

**)&&!@^&@ that $%#&$ing Jennifer Rubin. Here I was, planning to do my column …on the incredible font of corrupt, race-baiting rottenness otherwise known as Attorney General Eric Holder, and Jennifer Rubin steals my thunder! Her article in the newest issue of The Weekly Standard [see link above – D] lays out a sober, thoughtful, thorough case proving that Holder’s Justice Department is becoming frighteningly lawless (my words, not hers). Read it. And be very afraid.

It’s not just the “nation of cowards“ speech or other racial stunts, and not just the outrageous dismissal of the voter intimidation case against dangerous New Black Panthers. It’s also the stonewalling of legitimate congressional inquiry, and it’s also the open politicization of the staffing and the atmosphere at Justice.

He’s right. Ms. Rubin did a thorough, well-researched essay on Holder’s plan to make the American public square “progressive”. And except for lying through his teeth to the witless Senate Judiciary Committee, “Eric the Bold Liar” Holder has never made any secret of his plans.

The main problem is Congress. Despite repeated attempts to make Holder answerable, the Dems nonchalantly ignore behavior that would have them raising indignant calls for investigations ad infinitum. But this is their boy. And they do not want to know. These hothouse flowers never leave their Bubble-Inside-the-Beltway except to return home (where they hide from their constituents), or to board military planes to go on taxpayer-funded jaunts to study climate change. But these jive turkeys are elected by… us.

So the other, larger problem is us. If we don’t start pushing back, we will be stuck with these corrupt, cynical crony politicians. Yeah, they have ACORN, and union bullies, and lots of Soros money and rich idjits like Barbra Streisand and a dozen ways to stuff the ballot boxes with the votes of the dead. But we have numbers, and our numbers are increasing. The next step is energized determination and persistence in the face of determined evil. It’s up to us.

5 thoughts on “Eric Holder vs. “A Nation of Cowards””