Our Swedish correspondent reacted immediately to my newfound photo of the Swedish premier, who for the next six months will be the proud ‘chairman’ of the EU, and wrote me to put it in its proper coherence. He suggested the following poster for the Deadly Duo of modern Swedish political economy: 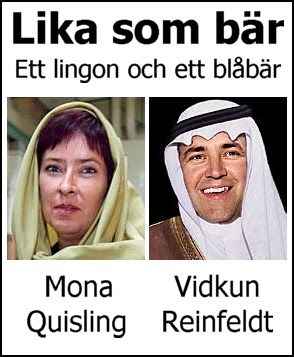 On the left is Mona Sahlin of the opposition Social Democrats, and on the right Prime Minister Fredrik Reinfeldt of the Moderates.

Lika som bär (alike as berries) is a Swedish saying used when you want to point out a profound similarity that superficially is not quite manifest. Lingon(berries) and blå(blue)berries, politically red and blue, tasting different, but both in their core and heart ultradhimmic Islamophiles.

I’m guessing that the most appropriate food-related English idiom for the same condition would be peas in a pod.