Earlier today our Austrian correspondent ESW took her camera and visited some of the more exotic parts of Vienna. Below is her report.

Note: full-sized versions of all ESW’s photos are available at the International Civil Liberties Alliance. 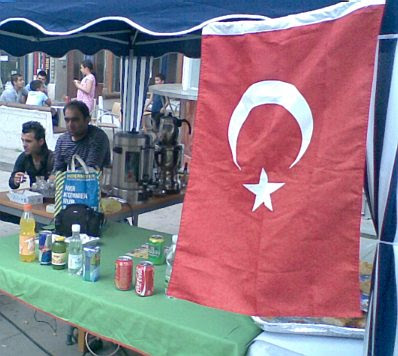 This is Multiculturalism in Vienna
by ESW

One of this day’s highlights was not the rain that followed days of heat here in Vienna, but a visit to the center of this city’s multiculturalism. By chance, we stumbled upon a gathering of a Turkish cultural association as well as an Afghan stand near it.

What made this scene surreal was the presence of a group of green-and-blue haired, pierced and beer-drinking punkers blasting the event with their — well — loud music. A closer look at the punkers’ demands was well worth it: Capitalism is the source of all poverty; €1,200 per month for everyone paid by the government (even those without a job!); free rent and electricity for all. Why does one bother to work and who will finance the 1,200 euros? No answer to be found on the flyer. 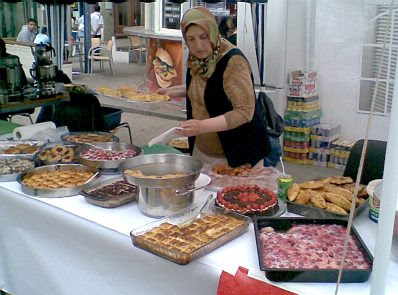 The Turkish stand merited a closer look. It was manned, actually womanned. All wore a headscarf, some were squatting on the floor, preparing the dough for the bread that was baked then and there, then filled with all sorts of vegetables and meat.

There were many other Turkish culinary delights, save the tasty Turkish beer (“Efes”), which was not offered. Tea was available in abundance. 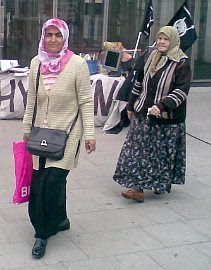 Christian and I walked around admiring the hijabed women, young and old, admiring the Turkish food, and asking questions. The banner behind the toiling women sported the name of the association: “Solidarity-Patriotic Association, Cadirli Haci Yusuf Köyü”. This is apparently the name of the village, located south of Ankara, these people are from. The money collected from the sale of food and drink, however, is not to go to their village, but to be used for their association. I asked one of the youth what they are planning to do with the money. “It’s for the football team and the poor in our group.”

“The poor,” I replied. “What about if an Austrian came and asked for food?”

“They never come,” was the answer.

Christian also asked whether they have had contact with the nearby church parish. No, never, although they been inside the church.

Since the young men did not speak good German, we were then led to an older man whose German was quite good. He told us he’d been in Austria for more than 20 years, ten of which as an Austrian citizen. He went on to say that he believed people should integrate and learn German, so that they could get a job. He himself was unemployed, but he was unhappy about it and didn’t like receiving welfare payments.
– – – – – – – – – 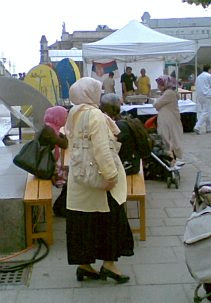 We also asked him about all the hijabs. Has he seen a change in the number of headscarved women?

Yes, he admitted, but these women have recently moved here from Turkey. The ones who have been here for a long time do not wear a headscarf.

Does his wife wear one? Yes, he admitted, grinning, although he doesn’t like it. That’s why he is getting a divorce, not only because of the hijab, but also for other reasons.

His daughter — he proudly points to her — does not cover.

I ask, But what about when she gets married?

“That’s her husband’s decision, no longer mine.”

He adds that the hijab does not measure a person’s religious feelings as these come from the heart.

Christian then asks him and his friends about the Quran. Do they know the sura about women, that they can be beaten? No, they don’t know about that. They read the Quran in Arabic once. Did they understand it? No, but their teachers explained it to them.

As Christian and I sat there eating our lahmacun (Turkish meat pizza without cheese) and asking them questions, I was wondering about these men. They manifested a sort of people’s Islam, a cultural Islam, a traditional Islam in the sense of traditions passed down, without knowledge of where these traditions come from. The men definitely live on two worlds, and they truly do not know where they belong.

6 thoughts on “This is Multiculturalism in Vienna”