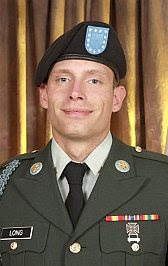 Pvt. Long, as you may recall, was shot to death a week ago outside an army recruiting center in Little Rock. According to the Associated Press, the accused murderer, Abdulhakim Muhammad, “allegedly wanted to kill as many soldiers as he could because of harm he believed the military has done to Muslims.”

As Mark Steyn has often pointed out, there is a remarkably high incidence of the name “Muhammad” among those who commit indiscriminate slaughter against innocent people. This particular Muhammad was once named Carlos Bledsoe, but changed his name when he converted to Islam several years ago. Afterwards he traveled abroad and became radicalized in the Middle East.

Muhammad came well-armed to the recruiting center in Ashley Square Shopping Center, and the FBI suspects that he may well have had additional targets in mind, including a Jewish center in Atlanta.

Abdulhakim Muhammad thinks so, because he came to the recruiting center kill members of the American military in an act of jihad. He was one of Allah’s soldiers in the war against the United States and the entire infidel world, a war that has been ongoing for nearly 1400 years.

If Andy Long died on duty during hostile action, he should receive the posthumous honors that are due to any other American soldier who gives his life in battle. He deserves to be publicly recognized as a battlefield casualty by the military authorities.

President Obama should acknowledge the ultimate sacrifice made by this young man who died while serving his country. His family should be invited to the White House for an appropriate ceremony.

Don’t hold your breath, though.

In any case, Pvt. Andy Long is now at rest. His family, friends, and fellow soldiers gathered at the cemetery today to pay their respects. As the Army Times article reports:

His family will decide whether the tombstone says Pvt. William Andrew Long was the first soldier to die at the hands of a terrorist since Sept. 11, 2001.

As it happens, today was the day Pvt. Long was to have shipped out to South Korea. He knew that he was heading into a danger zone on the other side of the Pacific, but what he didn’t realize was that anywhere can be a danger zone when jihad is involved.

That battlefield in the suburbs of Little Rock is just one small corner of Dar al-Harb.

9 thoughts on “Did Pvt. Andy Long Die in Battle?”