I posted today’s “Nazi of the Week” photo before I even read the article below. I’d love to say that life imitates art, but this AGI piece is actually dated June 17th.

With some difficulty I dug up a copy of the photo in question, as scanned from an Italian newspaper, so that you all can make up your own minds: 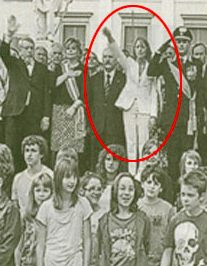 The minister was commenting on an article published today by ‘la Repubblica’, saying that “I’m horrified. But can anyone in good faith truly believe that a picture with a raised arm (as there are for Berlusconi and D’Alema, Obama and Fini, Bertinotti and Cossiga) means that I am the ‘minister with the Roman salute’, especially during an official ceremony attended by the press?

“And what reason would I have to publicly use this condemnable and unjustified gesture just after becoming a newly appointed minister, with no past trace of such behaviour on my part?

“Obviously there is only one answer that covers all angles and that is that the picture was taken while I was saluting the crowd. That somebody could misinterpret my gesture never crossed my mind.

“To those who are still suspicious but not in bad faith (as I believe is the case for those that raised the issue) I can only say that I never made or contemplated making a laudatory gesture for the fascist regime, a regime for which I never gave any sign of indulgence or for which I ever expressed any sympathy”.

5 thoughts on “A Non-Fascist Wave”