In my introduction to the news feed last night, I mentioned that “in a northern Swedish town, a threatening mob of native Swedes frightened Iraqi refugees and induced them to flee the town.”

I admit to a certain ironic hyperbole in my description — just imagine a group of today’s Swedes characterized as a mob! — but the actual story was somewhat less dramatic. Our Swedish correspondent LN wrote me this morning to set the record straight about what happened in Vännäs.

First, here’s the relevant section of the article in The Local:

Nearly half of the predominantly Iraqi-refugees residing in Vännäs in northern Sweden have decided to permanently move out of the area after being terrorized by what police called “a lynch mob” in early May.

“I thought that Vännäs was the perfect place for us. And there are many, many friendly people here. But we still don’t dare to stay; I’m seriously concerned about my children’s safety,” said father of five Ismail Ramadan to the Svenska Dagbladet (SvD) newspaper.

Ramadan’s family and several others have decided to abandon plans of starting a life in the small community outside of Umeå less than two weeks after a group of 30 to 50 young people assembled outside the apartment building in which the refugees lived and began shouting threats and throwing stones.

The May 9th incident resulted in several windows and many frightened refugees.

The weekend of harassment prompted municipality refugee coordinator Ingrid Lindroth to evacuate the refugees to safety.

“I made the decision after speaking with a number of refugees who were extremely scared — simply terrified. It was an easy decision,” she told SvD.

This is how the Iraqi refugees described their ordeal:

“I can’t even describe to you how horrible it was. ‘Now it’s over, here they come!’ I thought,” Ramadan told SvD.

“We all cried and screamed. We spent the whole night lying in the hall and held each other tightly.” 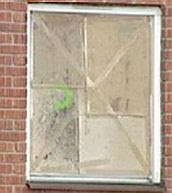 This was said by people coming from a war zone with real life threats!

What was the actual result of mob action and “stone-throwing”?

ONE pebble made a hole in ONE window (marked in green in the photo at right).

A few reasons for the anger expressed by “persons of Swedish background”:

There was also a spontaneous “anti”-demonstration: the local communists hired two buses to collect professional demonstrators from the nearest town, Umeå!

19 thoughts on “That Swedish Mob”