According to The Guardian: 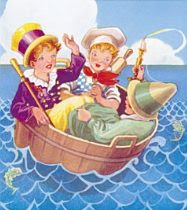 It was meant to be a carbon-neutral adventure to fire the imaginations of 25,000 schoolchildren.

Raoul Surcouf, 40, a landscape gardener from Jersey, and Richard Spink, 32, a physiotherapist from Bristol, shunned the polluting aircraft normally used to reach Greenland’s polar ice cap and set sail in Fleur, a 40ft yacht fitted with solar panels and a wind turbine…

I love the fundamentalist Greenie’s religious faith. It might not move mountains, but it certainly provides for some merry moments – at least when they’re not using their dogma to drag down the world economy.

So these two guys, full of religious zeal, were going to show the rest of us how to leave a smaller carbon footprint. And so confident were they of their mission that their co-religionists in the school system set up a plan to follow their devoutly correct and righteous path online, thus indoctrinating their charges:

Schools were poised to follow their green expedition online; once the duo had skied across the Arctic wastes they had hoped to boast of the first carbon-neutral crossing of Greenland.

Unfortunately, nature didn’t read the bible these folks wrote. Or maybe it didn’t care. Nature is famous for its indifference to human beliefs:

On Friday, nature, displaying a heavy irony, intervened. After a battering by hurricane force winds, the crew of the Carbon Neutral Expeditions craft had to be rescued 400 miles off Ireland.

As if their ordeal wasn’t terrifying enough, their saviour seemed chosen to rub salt in their wounds: a 113,000-ton tanker, Overseas Yellowstone, carrying 680,000 barrels of crude. In a statement from the tanker, Spink said: “We experienced some of the harshest conditions known, with winds gusting hurricane force 12 … The decision was made that the risk to our personal safety was too great to continue.”

In truth, the crew could not afford to be choosy. They were in a life-threatening predicament, and heaped thanks on Captain Ferro, the tanker’s skipper, and his crew for being “outstanding in the execution of the rescue”. But the rather awkward twist was not lost on Spink, who ruefully noted afterwards that “the team are now safely and ironically aboard the oil tanker” as they headed to Maine, where they are due to arrive in three days.

– – – – – – – – –
I don’t understand. Why did they choose to be rescued? Don’t Greenies believe that the world is far too full of people as it is? They could’ve chosen martyrdom for The Faith, and lived on in the memories of those that believe the more of us who die, the better. What better way to go than practicing your solar panel pieties?

What wimps. The early Christians could’ve shown them a few derring-do adventures with lions and such. But these guys are just fair-weaather believers. First sign of trouble and they’ll even let the Enemy rescue them.

“They are extremely relieved to just be alive,” said Jess Tombs, a spokeswoman for the expedition. Were they feeling sheepish about being rescued by an oil tanker? “They were just relieved,” she said. “We don’t want to think about what the outcome would have been if they hadn’t.”

Bah! If they were True Believers they’d be ashamed to be alive due to being rescued by a – gasp! – oil tanker. No doubt they were deeply ashamed but too wet to set themselves on fire.

So what’ll they do now? I know an ex-blogger who’s settled Down East (in Maine, that is). He’d be glad to sell them a canoe and a sextant.

Hey, wait! Maybe canoes aren’t Green. To make them you either have to cut down trees or, even more ughishly, use modern materials like the dread fiberglass.

So maybe they should just swim home.

One good thing came out of this: they won’t be giving any sermons about their environmentally correct adventures.

2 thoughts on “Drowning in Your Own Tiny Carbon Footprint”