A zealous local prosecutor in the Swiss canton of Wallis took offense on behalf of Muslims over an “Islamophobic” campaign poster and initiated a judicial action against the disgusting racist political party that created it. Even the local cantonal judge ruled against the prosecutor, and now the highest court in Switzerland has confirmed the verdict: the poster is harmless.

Our Flemish correspondent VH has translated a report from Politically Incorrect: 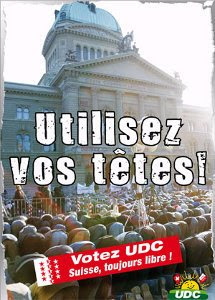 An election poster for the SVP [Swiss People’s Party] in the Swiss canton of Wallis insulted Muslims and caused an outrage. It shows Muslims praying in front of the Federal Parliament in Bern (photo) and on the picture are printed the words: “Utilisez vos Têtes!” [“Use your heads!”], followed by “Votez UDC — Suisse, toujours libre” [“Vote SVP — Switzerland will always be free”]. The Swiss Federal Court has now reached a final decision that this poster was acceptable because it does not violate the prohibition of racial discrimination.

The public prosecutor of Wallis demanded a punishment for racial discrimination against the unknown designer and distributor of the poster. The Cantonal Judge did not agree with the accusations, and this was confirmed last July by the Wallis Cantonal Court.

The Federal Court at its public session on Monday finally dismissed the appeal against the verdict by the public prosecutor of Wallis. Four of the five judges of the criminal department came to the conclusion that the poster does not infringe the ban on racial discrimination.

The image merely shows praying Muslims and calls for them to use their heads. The fact that people feel it is addressed to them and thereby feel insulted actually allows more conclusions about the insulted than about the poster itself.

That the Swiss Federal Court in Lausanne still prefer to use their brains for something other than giving in to Muslim outrage has been proven in previous cases.

6 thoughts on “Use Your Brain!”