On Dymphna’s most recent post a bit of a food fight broke out between RtL and some of our other commenters.

As regular readers know, when comments degenerate into name-calling and insults to other commenters’ intelligence, we tend delete them. This is an attempt to preserve a framework of basic civility in which reasoned debate can flourish. As I told RtL, once upon a time such things used to be well-understood, back when reasoned debate was still possible. Unfortunately, we live in a degraded age.

RtL’s subsequent responses indicated that he considers our behavior to be censorship, and a hypocritical violation of our own professed principles of free speech. This reasoning reminds me of a twelve-year-old boy who has just learned about the U.S. Constitution, and insists to his parents that their demand that he display good table manners at dinner is an infringement of his constitutional rights.

Both RtL and the twelve-year-old are failing to distinguish between the public sphere — in which the Constitution obtains, and the right to free speech must not be abridged — and a private space, which one enters and exits voluntarily, and in which more restrictive rules may apply.

Censorship can only occur when the government suppresses the right of free speech. Within a private zone, any restrictions applied by the proprietors are known as “rules”.

Referring to rules in a private space as “censorship” is meaningless. People who dislike the rules may set up their own private zones and apply their own preferences. This is how true liberty functions within civil society.

I bring all of this up because RtL decided to communicate with me by leaving comments and then immediately deleting them. Presumably he knows that I can read them as they come into our comment email account, and thus he could let his feelings be known without exposing them to public view.

So I’ll let him have his say here by reproducing his final (for now) deleted comment. Note: this comment violates our rules, and I would probably have deleted it in any case. But, given his delete-and-run tactics, I think it’s useful for readers to see what he had to say:

I never read Dympna’s reply to me, as it was not addressed (ad hominem attacks). I however replied fully to her as you see above. I am not a ‘leftist’ either, even though you like to paint me as one. You just don’t get it about freedom of speech Baron. In fact very few people on here do. You were all up in arms at Geert being refused entry into Britain and the OIC defamation of Religion Law and countless other erosions of our freedoms, yet you have rules about what we can write which, you state as editorial discretion.

The sad reality here Baron, is that you and many people in the fight against Islamisation are no better than those you fight. You simply cannot see it. You are having your cartoon turban campaign, yet is that not offensive to Muslims? I find it all laughable really(regarding the cartoons) but you still miss the point. You deleted a whole comment because I called someone a mindless drone, whom I would bet my bottom dollar, you’ve (and/or others) collectively called Muslims. There are many insults on here against Muslims, I’ve seen them with my own eyes, but yet, you still are totally unaware that your deleting of comments breaks every freedom of speech.

If you want to defeat Islam, then you will realise that they want to destroy our liberties. You will also know as well that the MSM destroys our liberties by curtailing our freedom of speech, not forgetting reporting lies, if that is they report.

Baron, I’m afraid to say that this is sheer hypocrisy on GoV side. If you want to promote western freedoms then you have to allow freedom of speech to be sacrosanct. If you continue to believe that you want to set down rules then you are, again no better than those whom you are fighting against.

I am not leaving in a huff. I’m leaving because I really have no intention of being part of hypocrisy. And Baron, this precise thread has shown that it exists on monumental levels. All because I criticised TK over a woman who he thought was like a flower blooming in the desert? You cannot see the destructions of our civil liberties on a daily basis and restriction on FoS in case we may offend is riding at the front of the attack. We don’t need to worry about Islamation BB, as it seems our society will be ready for it when it arrives a our freedoms will vanish thanks to blogs like this who champion freedom of Speech yet continue to delete comments they find ‘unsavoury’. This is almost as laughable as Geert Wilders championing FoS, yet wanting to ban the Qur’an.

You just don’t get it do you? I’m not a leftie, far from it, although I am a right wing leaning centrist, who believes 100% in liberty.

Once again, RtL seems to have avoided a close reading of my reply — I would never take him for a Leftist!

What I said was he makes the same categorical error that Leftists often make: equating the enforcement of speech rules in private settings with “censorship”.

This conflict illustrates once again a problem we see so often: the contentious and fissiparous nature of anti-jihad conservatives. It seems that we can’t help ourselves — we have to insult and denigrate those with whom we disagree, even when we’re all fundamentally on the same side.

Instead of saying, “I disagree. I think the United States should never have invaded Iraq, and here’s why…”, people say something like: “You’re a wrong-headed fool who has succumbed to neocon brainwashing, and I don’t know why you would say such a stupid thing!”

In its mildest form, this mode of interaction wastes time, produces needless acrimony, and fails to generate any movement towards productive action. At its worst, it leads to firestorms like the LGF/Vlaams Belang affair, which can divide the entire movement and do damage to our ability to resist the Great Jihad. 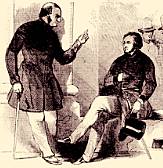 Any arguable issue can be argued more effectively if civility is maintained. Minds are changed at the margin — nobody at one of the polarized extremes is going to alter his position easily, but people who are hovering at the edge of a decision may be nudged into one position or the other by an effectively presented argument.

This process — which is absolutely crucial to our success — is much more likely to occur in a civil atmosphere. When discussion becomes heated and personal insults are hurled, the participants tend to coalesce into two polarized camps from which they are unlikely to budge.

And then we’re all fighting among ourselves and doing our enemies a big favor.

That’s why I have made such a trivial incident into a topic for discussion — it’s a microcosm of a much larger problem, one which will yet be the death of us all if we don’t learn more effective ways of interacting with one another.

Note: Readers who think that reposting RtL’s comment here violates his privacy — as it would have if he had sent it to me in an email — should remember that posting a comment here, even for just a second, causes the comment to be included in our blog’s RSS feed.

So that comment was (and is) quite public for anyone who subscribes to the RSS feed for Gates of Vienna.

21 thoughts on “Civility, Good Table Manners, and Our Constitutional Rights”