Russkiy is a regular reader and occasional commenter here at Gates of Vienna. After my recent post about Russian demography, he sent me an email with additional first-hand information about indigenous Russian Muslims. He has given me his kind permission to publish the entire text:

This is regarding your recent post about the Russian Muslim population. Although I have been living away from Russia for a while, I believe I can shed some light on this issue. 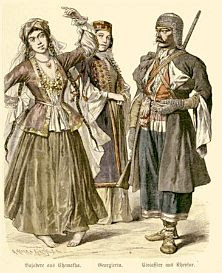 As people mentioned in the comments, a majority of Muslims in Russia are Tatars. I will try to give you some idea of who these people are.

First of all, I believe that a very big proportion of the Russian population that describe themselves as ethnic Russians are actually Tatars. These people are fully Russian now, and are Christians. The rest of the Tatars can be split into three categories.

The first group normally have Russian names, but Tatar surnames. These people are normally indistinguishable from Russians, and rates of intermarriage are very high. However, this group when queried (in statistical surveys) may identify themselves as Tatars.

The second group normally would have a Tatar first name as well as the second. They would definitely identify themselves as Tatars in a statistical survey, and rates of intermarriage with Russians are still high but less than in the first group. These people live closer to traditional Tatar homelands and therefore they have greater ability to preserve their identity.

The third group would in many respects be similar to Kazakhs, whom I will discuss in detail. These people may or may not know their native language. They pay lip service to religion; however, the majority of these people wouldn’t know much about Islamic doctrines. They wouldn’t normally pray, but may attend the mosque occasionally during some festivals.

One thing to note here is that the only real thing that separates Tatars from Russians is religion, so if Tatars become nationalistic I think they will become more religious. The Russian government must play a game to get these people to become fully Russian without alienating them and pushing them back towards religion.

And I am sure there are some very religious people amongst them, but a very small minority.

As for Kazakhs, I believe I can shad some light on them as I am married to one, and have been to Kazakhstan.

The first time I met my wife (about five years ago) she appeared very liberal, pro-Western, and very modern. However she still referred to herself as a Muslim. She would cringe when I would start criticizing Islam and making fun of Arabs. It took me a while to get her to eat pork. As time passed, and I studied more about Islam (partially because I thought that our marriage wouldn’t be accepted by her family because I wasn’t a Muslim, and I had to do a fake conversion) I managed to prove to her that Islam is all bollocks, and now she is a bigger Islamophobe than I am.

When we visited her family in Kazakhstan, I observed that life there is very much like in Russia. The urban people on the surface appear the same. The main difference is that in the family there is an obvious hierarchy, where the head of the family is really the boss, and the lowest members are the daughters-in-law. They are supposed to serve food and sit at the side of the table closer to the door (less prestigious), while the best seats at the table are reserved for the head and the guests (me and my wife in that case).

The conversation was much more formal than I was used to. I really had to listen to the elders, never interrupt them and never argue. You can’t really have a discussion in that environment. For example, in my family I can have a discussion with my grandparents, and if they are wrong I will argue with them until either they convince me that I am wrong or vice versa.

People in her family speak Russian; their knowledge of the Kazakh language is poor, and non-existent amongst the younger generation. This is the case with urban Kazakhs; the people who live in the country speak Kazakh, and Russian not so well, with an accent. There is a division between the two types of Kazakhs. Each type looks down on the other. The city-dwellers think that the other type are unsophisticated, uneducated barbarians, and the other type thinks that the city-dwellers are not true Kazakhs anymore.

The relationship between Kazakhs and Russians is fairly good. A lot of intermarriage, however, normally it’s a Kazakh man and Russian woman. But on a positive note their children are very Russified and non-religious or Christians. I have met many of them.

And in my case, although to start with there were some objections to our marriage, they have accepted it in the end, and I have a very good relationship with them.

As for their religious observance, it is very low; the mosques are only visited during holidays and to say a prayer for the dead on the anniversaries of their passing. They don’t pray, they drink, and they don’t observe halal except for not eating pork openly (although everyone eats pork sausages).

Kazakhs really hate Turks for some reason (probably because Turks look down on them as their smaller siblings and bad Muslims). Also, if you have the appearance of a Wahhabi you can get your butt kicked over there. They do differentiate between Muslims and Muslims, meaning that they actually refer to real practicing Muslims like in Uzbekistan as Muslims (kind of ambiguous).

I hope this helps to define the type of “Muslims that live in and around Russia”.

P.S. Another thing I want to mention is that I have seen fewer women wearing hijab in Kazakhstan than in New Zealand, a Western non-Islamic country. In fact, the type of dress for women in Kazakhstan is very “Western” — by that I mean slutty. Girls wear short skirts, lots of makeup, etc. I am sure men from Western countries like the US or New Zealand wouldn’t be able to stop staring at them, as the clothes worn over there by girls are much more revealing than in the West for some reason. Women in general pay much more attention to their appearance. I guess that’s a feature of a more chauvinist society, but I kind of like it.

Mark Steyn and other writers who describe the civilized world’s looming demographic crisis are right — there is a serious problem. Russia, Japan, Italy, Spain, and a number of other countries are facing a choice between drastic depopulation and being overrun by Third World immigrants.

But the overall situation is complex, and our slide into disaster is not yet irreversible. I’m grateful to Russkiy for providing us with a more nuanced view of the current demographic makeup of his country.

12 thoughts on “Scratch a Tatar”