As most readers already know, we’re in the run-up to “Durban II”, the anti-racism UN extravaganza to be held in Geneva next month under the auspices of the UN Human Rights Council.

The Organization of the Islamic Conference (OIC) now pulls the strings of the UN human rights puppet, so Durban II is effectively an OIC operation. The language of the draft Declaration — which has been under construction now for months — is, not surprisingly, full of anti-Zionist invective.

For that reason, Israel, Canada, and Italy have announced that they will not participate in the Geneva set piece. Last week the Obama administration surprised the world by announcing that the anti-Semitic language of the declaration was too much, and that it was withdrawing from the preparatory process.

However, as sharp-eyed observers soon noticed, the administration has left itself a lot of room to opt back into Durban 2 if the UNHRC pastes a few flimsy fig leaves over the superstructure. So next month we may well be subjected to a Jew-bashing spectacle boycotted by Canada and Italy but attended by the United States of America.

The OIC’s latest pronouncement expresses gratitude for the flexibility and accommodation displayed by the Obama administration. The taqiyya from the White House has not passed unnoticed.

Before I get down to the nitty-gritty of the what the OIC said, readers are invited to ponder the following phrases, which I have bolded in the text of the statement:

This is the framework under which the Islamic countries intend to push anti-free speech resolutions through the UN. Criticism of Islam is racist, hateful, and defamatory, and — based on existing human rights covenants — must be suppressed.

And now here’s the statement issued last week by the Secretary General of the OIC, Ekmeleddin Ihsanoglu, interspersed with my comments:
– – – – – – – – –

The Secretary General of the Organization of the Islamic Conference welcomed the US Government’s decision to send a delegation to the preparatory meeting of the Durban II Review Conference which is to be held in Geneva on 20-24 April 2009. Terming it as a positive development, the OIC Secretary General emphasized the importance of the Durban II Review Conference in stepping up the worldwide efforts to counter discrimination, racism and xenophobia.

This is the crux of the matter: criticism of Islam is racist and Islamophobic. If you are a Bosnian Serb, and you criticize a Bosnian Muslim, you are a racist, even though the two of you are genetically indistinguishable. It doesn’t matter; it’s still racism.

And it’s xenophobic, too, even though both groups have shared the same mountainous turf in the Balkans for half a millennium.

He further added that the decision to enable the United States’ representation in the conference would be a move in the right direction. He also expressed that the decision would be widely perceived by the Muslim world as a credible signal of the new US Administration’s goodwill and desire to introduce a fresh, fair and objective approach to the issues related to human rights and Middle East peace process as well as to rejuvenate the United States’ positive image throughout the Muslim nations.

This puts Obama in the spotlight. If he doesn’t come through and join the Israel-bashing, he will be consigned permanently to the “Tool of the Zionists” category, just as were Bush, Clinton, and all their predecessors.

The administration has its work cut out for it finessing this one.

Regarding the allegation that the Durban II Review would be exploited by some of the OIC member states to make anti-Israel and anti-Semitic diatribes, Secretary General Ihsanoglu noted that anti-Semitism is a practice which neither originates within, nor belongs to the Muslim communities. Therefore, anti-Semitism should not be associated either with the religion of Islam, or with the OIC member states. Secondly, it should be every individual’s right and freedom to criticize the policies and practices considered to be in breach of human rights. In the same vein, criticizing Israel’s policies and practices in the occupied Palestinian territories, which are in contravention of the universal human rights principles and specifically relevant articles of the Geneva Conventions should neither be perceived nor portrayed as anti-Semitism. The very fact that a number of OIC member states have sizeable Jewish populations and that the Jews enjoy living in these countries as integral parts of the societies, is a testimony that anti-Semitism is not the right word to describe Muslim’s discontent with the Israeli practices.

“Jews enjoy living in these countries”??

Do you have any documentation for that statement, Prof. Ihsanoglu?

From the very beginning the OIC has made it clear that the Durban Review process should not be a politically motivated process or an anti-Semitic exercise. It should be, on the contrary an inclusive process, where all stakeholders should be free to address the real and serious challenges of racism, racial discrimination and xenophobia.

The OIC Secretary General stated that stereotypical images are increasingly becoming source of grave concern to all peace-loving circles in the world as these practices tend to incite hatred, discrimination and intolerance and clarified that while the OIC draws attention to the increasing trend of discrimination and intolerance against Muslims, at the same time, it offers its cooperation to address anti-Semitism, Christianophobia and anti-Western misperceptions as well. 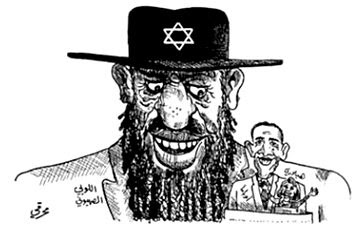 No, unfortunately not. The above cartoon just a realistic depiction, a graphic display of essential allegorical truth.

In contrast, this is an example of an offensive “stereotypical image”, one that tends to incite hatred, discrimination and intolerance:

Vicious anti-Semitic cartoons appear in the Arab press every day, year in and year out. Israelis do not take to the streets because of them. Jews don’t riot. They don’t burn flags and torch embassies. It’s just business as usual.

No, the second image is the one that’s racist and Islamophobic. Cartoonists who draw such discriminatory stereotypes already live in hiding. But from now on, if the OIC has its way, they can also expect to feel the hot breath of the law down their necks, even in Denmark.

He emphasized the OIC’s firm commitment to freedom of expression which is a fundamental human right and stated that the OIC is not looking for limitation or restrictions of this freedom beyond those that already have been set by Articles 19 and 20of the International Covenant on Civil and Political Rights of 1966.

OK, the OIC is in favor of free expression… except for the restrictions imposed.

In case you’re interested , Articles 19 and 20 of International Covenant on Civil and Political Rights of 1966 stipulate the following (with my emphasis added):

These three exceptions — respect for the rights or reputations of others, the maintenance of public order, and the incitement to discrimination, hostility or violence — are the heart of the problem.

When we publish derogatory cartoons of Mohammed, make jokes at Muslims’ expense, or criticize Islam, we are being disrespectful of the reputation of entire Muslim world. Even quoting certain verses of the Koran is disrespectful of Islam — if infidels do it. And dissing the Ummah is the one thing we must never, ever do.

When we disrespect Muslims it makes them very, very angry, and their natural response is to take to the streets, break windows, burn flags, and set fire to synagogues. Therefore our disrespect is a threat to public order, and must not be allowed.

Every word that we speak, every sentence we publish, every foot of video we record, is an incitement to discrimination, hostility or violence if it is not positive, respectful, and fair in its depiction of Islam.

And if you’re in any doubt about what is positive, respectful, and fair in its depiction of Islam, just ask the OIC. They’ll give you the guidelines.

That’s what they’re there for.

These loopholes in the UN’s guarantees of free speech — concerning respect for reputation, public order, and incitement to discrimination — are big enough to drive a truck through. The OIC is packing up the truck right now, and it will be coming our way next month.

This time they intend to leverage a binding resolution out of the UN — that is, one that compels all signatories of the United Nations Treaty to pass legislation in their countries implementing its provisions. The Swedes and the Spaniards may sit still for this kind of thing, but what about the Danes, the Italians, and the Swiss?

And, God help me, what about the United States of America?

Take stock of the political climate in your country: will it renounce its membership in the United Nations rather than pass a law restricting speech that “defames religion”?

This could well be the civil liberties question of the year.