This is an ugly story, strangely reported. Here are the essentials: 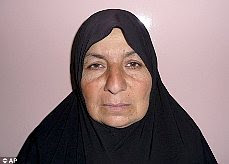 So now Umm al-Mumineen is in the slammer, accused of what she has been video-taped confessing. There isn’t any notice of when her trial will be, at least not as far as I could see.

Here’s the strange part of the story as you read the various accounts currently in the MSM: some of the stories discuss her recruitment of the women yet omit the fact that rape was used as the method of indoctrination. Without that essential piece of information the fatal submission of that many women seems odd. You begin to wonder if maybe Momma just had a magnetic personality capable of inducing ordinary women to strap on bomb belts and go to glory.
– – – – – – – – –
Other reports will give you information on the rape, but hedge it with all sorts of weasel words. Reading, say, The Times Online, you find the part about “recruitment” via rape. But the story is fenced in with qualifiers:

Samira Ahmed Jassim, 51, confessed to dispatching 28 of the women to carry out attacks…She was captured at an undisclosed location a fortnight ago.

She also described how she would escort the women to an orchard for insurgent training. Finally she spoke of how she would lead them to their targets.

Major General Qassim Atta played a video of the apparent confession at a news conference. [my emphasis — D]

You can read the whole story to see all the weasel words the Times manages to scatter through its tale. Can anyone tell me their agenda here? Do they have to use words like “apparent” and “appears” because they’re afraid of violating Mum’s civil rights?

Then there is Yahoo’s version, which they got from AFP with a byline by one Salam Faraj. Nary a mention of the rapes:

Samira Jassim, 51, admitted that she had mentally prepared the women, passed them on to terrorists who provided explosives and then took them to their targets.

“The first one’s name was Um Hoda,” Jassim said. “I sent her to the orchard (where the insurgents were hiding) for training…”

After a few days the woman was sufficiently convinced to become a suicide bomber. “She exploded herself against a police station in Mukdadiyah,” a city of 250,000 people, located 100 kilometres (62 miles) northeast of Baghdad, Jassim said.

“Sufficiently convinced”, huh? One can only imagine. Or better yet, don’t.

From the online version of The San Francisco Chronicle, we get the same information but this time it’s told straight:

A woman accused of helping recruit dozens of female suicide bombers looked into the camera and described the process: trolling society for likely candidates and then patiently converting the women from troubled souls into deadly attackers.

The accounts, in a video released Tuesday by Iraq police, offer a rare glimpse into the networks used to find and train the women bombers who have become one of the insurgents’ most effective weapons as they struggle under increasing crackdowns.

In a separate prison interview with The Associated Press, with interrogators nearby, the woman said she was part of a plot in which young women were raped and then sent to her for matronly advice. She said she would try to persuade the victims to become suicide bombers as their only escape from the shame and to reclaim their honor.

Wouldn’t you know it, an Australian site says it concisely, right in the headline:

The Daily Mail fails on all counts. Never mentions the rapes and sidetracks itself from the point of this story into talking about the Iraqi elections. Here’s their summation of this horror:

The use of female suicide bombers is part of a shift in insurgent tactics to avoid detection at U.S.-Iraqi military checkpoints that have become ubiquitous in Iraq as part of increased security measures.

Iraqi women often are allowed to pass through male-guarded checkpoints without being searched, and they traditionally wear flowing black robes that make it easier to hide.

To counter the threat, the U.S. military has stepped up efforts to recruit women for the Iraqi security forces.

In the video, Jassim said she had to talk to one elderly woman several times before persuading her to blow herself up at a bus station.

It also took Jassim two weeks to recruit another woman who was a teacher. She had problems with her husband and his family, according to the confession.

“Insurgents”, huh? As they say around here, “if that don’t beat all”…

But why are some of the newspapers refusing to discuss the brutal methods that Ansar al-Sunnah is willing to use in order to destroy the fragile peace while others have no problem with printing the whole truth?

Personally, I liked the Oz approach best: grab your readers with a headline. “Mum” as they called her, is certainly the personification of evil. It is hard to imagine the moral abattoir in which she resides. I find myself thinking that this creature from the shadows was once a little girl, and later a young woman. What experiences twisted her into the deformed being she is now? They must have been soul-searing.

Now this creature, who should be at an age of generativity, ready to pass on to younger women the accumulated wisdom of her life, instead has been intent on passing death out to as many as possible.

Ah, but our Dear Leader says she is not a terrorist. Mum is merely an extremist. Or, as the Mail says, an “insurgent”.

Now let’s sit back and wait for the Human Rights groups to complain when she’s found guilty and sentenced to hang. Fortunately, they’ll have to do their wailing from a distance as Iraq is not bloody likely to let them in.

The infidels, or at least some of them, have their strong women: Ruth, Naomi, Judith, or Miriam. The jihadists have theirs, one Samira Ahmed Jassim.

And therein lies our culture clash.

15 thoughts on “The Terrorists’ Mother of Death”