A reader named SS, who lives in Greater London, sent us a tip yesterday for the news feed about the appearance in his neighborhood of posters that advocate terrorism and jihad. Today he sent us a recent example of such posters, from Walthamstow, in the northeast of Greater London: 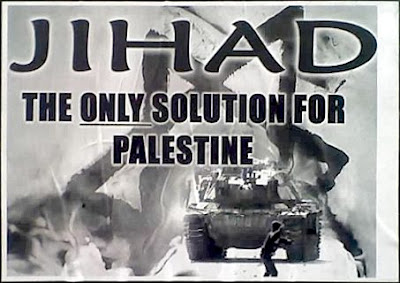 Here’s what SS had to say about the poster:

Here attached is a photo I took this morning of a freshly pasted jihad poster stuck on some street furniture near the bus stop on Station Road, Walthamstow. It must have been done overnight as it was not there yesterday when I noticed two posters on the bus stop shelter itself. When I got back this morning they had been torn and written on. So — obviously — someone is managing this media campaign to ensure the message remains in sight of the local Ummah!

POSTERS advocating terrorism have appeared near a college and a mosque in Waltham Forest — fuelling fears that extremists are using the Gaza crisis to recruit young people.

Dr Usama Hassan, imam of the Al-Tawhid Mosque, spotted a poster saying “Jihad is the only solution” opposite Leyton Sixth Form College in Essex Road and another calling on Muslims to “rise up against Britain” close to his mosque in Leyton High Road.

He removed both posters, saying: “We are making a lot of progress in combating extremism. The failed plots and convictions have made people see the complete stupidity of it all.

“But the Gaza crisis has the potential to undo a lot of the good progress we have made.”

“Some people think it is cool to be a gangster, and for some people being a terrorist is the ultimate gangster.”

So here’s a possible explanation for Sudden Jihad Syndrome: the allure of being a cool gangster becomes overwhelming, and a formerly “moderate” Muslim feels compelled to kill the Jews. Be cool! Be rad! Join the jihad!

Dr. Hassan, who is supposedly a “moderate”, would like to see Israeli diplomats expelled from the UK:

The imam wants to see stronger words from the UK Government and he believes the possibility of expelling Israeli diplomats from the UK should be considered.

The Arab Peace Initiative, a plan which would see Israel withdraw to its 1967 borders, release Palestinian prisoners and see Israel recognised as a sovereign state, would be a potential solution to the long-running crisis, according to Dr Hassan.

Dr. Hassan has apparently forgotten that this very plan was rejected by the Palestinians in 2000, who chose instead to initiate the Second Intifada.

If anyone else has different jihad posters from Londonistan, please feel free to send them. Limit the file size to 200kb, please!

2 thoughts on “Jihad in Walthamstow”