The other day I received an email from a contact in the French Counterjihad with the following request:

Hi Baron, would you be willing to publish the following as a support to Geert Wilders. If Geert Wilders falls, then freedom of speech is dead in Europe. We are launching an extensive International Action SITA including two possible texts in English; one comparing Wilders and Winston Churchill and another Wilders and Charlie Chaplin.

Below are some excerpts from SITA’s English-language pages. First, Geert Wilders as Charlie Chaplin: 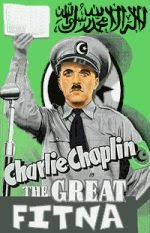 Geert “Charlie” Wilders, Dutch deputy fighting Islamo-fascism, is prosecuted by dhimmis because he is warning European people against Islamo-fascism with his movie Fitna. Dhimmis harassing him obviously have a defective memory.

Let’s remember, and let us remember them (check action at the end), what happened back in 1939:

Rising European National Socialist (Nazi) party of chancellor Hitler was the biggest threat to peace in the world by the end of the first half of the 20th century.

Rising European Submission (Islam) sect of prophet Mahomet is the biggest threat to peace in the world by the beginning of this first half of the 21st century.

Charlie Chaplin read Chancellor Hitler’s book, Mein Kampf (my fight), and compared to what the Nazis actually did, not only in their native country (Germany) but also outside it, in Europe, he understood that they were just following Hitler’s project for mankind. A project clearly explained black on white in his book. A project which would for sure bring the whole planet into war.

Geert Wilders read prophet Mahomet’s book, Al Coran (the recitation), and compared to what the Muslim are actually doing, not only in their native country (Saudi Arabia) but also outside it, in Europe, he understood that they are just following Mahomet’s project for mankind. A project clearly explained black on white in his book. A project which will for sure bring the whole planet into war…

Geert “Winston” Wilders, Dutch deputy fighting Islamo-fascism, is prosecuted by dhimmis because he is warning European people against Islamo-fascism with his movie Fitna. Dhimmis harassing him obviously have a defective memory.

…Churchill denounced and warned about that ideology when Hitler admired it.

Today Winston Churchill, the most stalwart anti-Nazi, would be arrested in Holland for incitement to hate and racism whereas Hitler would be free to promote Islam and recruit Muslims into his Nazi party unmolested.

And what does SITA offer in the way of action proposals?

Justice will find Geert Wilders not guilty and the Koran guilty.

People trying to silence Geert Wilders heavily need to be brought back to crude reality. Let’s explain to them, loud and clear, that European people will NEVER accept to lose freedom of expression, an even less to lose democracy. Surely not to have a Muslim dictatorship instead.

Forget about internet petitions and e-mails: they, literally, have no weight (see snopes.com/inboxer/petition/internet.asp…)

Doing something for real, and efficient, to support Geert Wilders, and freedom of expression above all, is very simple with the Amnesty International-SITA method: a letter, in a stamped envelope, sent by snail-mail…

I suggest you visit International Action SITA, follow their links, and take part in their mailing campaign. Real snail-mail correspondence from concerned citizens can have a profound effect on politicians; it concentrates their minds.

But remember: Be polite and concise! Abusive invective or lengthy crank mail gets tossed in the trash immediately.

I’ll leave you with what Winston Churchill, the most prominent European fighting Nazi tyranny, had to say about Islam:

How dreadful are the curses which Mohammedanism lays on its votaries! Besides the fanatical frenzy, which is as dangerous in a man as hydrophobia in a dog, there is this fearful fatalistic apathy. The effects are apparent in many countries. Improvident habits, slovenly systems of agriculture, sluggish methods of commerce, and insecurity of property exist wherever the followers of the Prophet rule or live.

A degraded sensualism deprives this life of its grace and refinement; the next of its dignity and sanctity.

The fact that in Mohammedan law every woman must belong to some man as his absolute property, either as a child, a wife, or a concubine must delay the final extinction of slavery until the faith of Islam has ceased to be a great power among men.

Individual Muslims may show splendid qualities. Thousands become the brave and loyal soldiers of the Queen; all know how to die; but the influence of the religion paralyses the social development of those who follow it.

No stronger retrograde force exists in the world.

Far from being moribund, Islam is a militant and proselytizing faith. It has already spread throughout Central Africa, raising fearless warriors at every step; and were it not that Christianity is sheltered in the strong arms of science — the science against which it had vainly struggled — the civilisation of modern Europe might fall, as fell the civilisation of ancient Rome.

13 thoughts on “Charlie, Winston, and Geert”