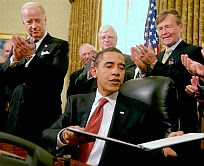 Remember the Big Deal recently when O’Bama signed his long-awaited executive order, the one about the closing of Guantanamo’s prison for terrorists?

Turns out that no one wants the inmates, so he may have trouble emptying out the place. Alcatraz would be perfect, but the Speaker of the House, the Hon’bl Nancy Pelosi, says no way, José. Alcatraz is in her district, which is filled with enough America haters as it is. Besides the fact that The Rock is a tourist site now, the place would probably never meet the code for “humane” treatment.

For that matter, they’re going to have trouble finding any place as luxe as Gitmo for our detainees.

At the time of the signing there was also a lot of ballyhoo because the president was also closing those evil black sites where newly captured terrorists are held until they can be sent on to other destinations. You know, those evil dark places that flourished under the evil, dark Bush.

The Washington Times has the exclusive on this story. It will probably stay “exclusive” as the MSM is not going to tarnish any of O’Bama’s haloes if it can be avoided:

The provision illustrates that the president’s order to shutter foreign-based prisons, known as black sites, is not airtight and that the Central Intelligence Agency still has options if it wants to hold terrorist suspects for several days at a time.

Current and former U.S. officials, who spoke on the condition that they aren’t identified because of the sensitivity of the subject, said such temporary facilities around the world will remain open, giving the administration the opportunity to seize and hold assumed terrorists.

The detentions would be temporary. Suspects either would be brought later to the United States for trial or sent to other countries where they are wanted and can face trial.

The exception is evidence that the new administration, while announcing an end to many elements of the Bush “war on terror,” is leaving itself wiggle room to continue some of its predecessor’s practices regarding terrorist suspects.

There will be enough “wiggle room” behind that curtain for Obama to appear to “change” any number of rules while everything stays in place, just as it always has.The main difference is how the media will play this. Obama may be the One, but the press are The Ones in Charge; it’s been that way since Nixon. The MSM is impervious to “change”, especially now that they have their man into the Oval Office. Keeping his halo burnished is the job of the hour. Just as they ignored the positive things that Bush did in office, they will ignore or play down the O’s wiggling and back-stepping.

So we still have the CIA black holes. We still have Gitmo. We still have a bloated, corrupt government. The Imperial Congress continues to bloviate while the country rolls over and goes back to sleep – as more and more of the unemployed are doing. What’s the point of getting up when the job opportunities are shrinking faster than cotton clothing from China?

Helle Dale, from the Heritage Foundation, had these observations about appearances vs. reality:

…President Obama’s announcement…has been greeted here and abroad with jubilation, every bit as much as if the gates of the detention center had been permanently shut, chained and padlocked.

European leaders lost no time claiming the credit for Mr. Obama’s decision. Spanish Foreign Minister Miguel Angel Moratinos said that closing Guantanamo is a move “which Spain and Europe have demanded.” So did German Foreign Minister Frank-Walter Steinmeier, who told the BBC: “Germany belongs to the group of countries like the UK who demanded closure of Guantanamo. It’s a question of credibility. Its closure is necessary for the USA, especially if the U.S. wants to restore its credibility in the Middle East and in the Arab world.” At least Mr. Steinmeier offered to help with the detainees (an offer that was notably never extended to the Bush administration)…

Dale notes that O has a steep learning curve when it comes to looking “presidential” now that he’s gotten his wish. For sure, Bill Clinton would have done his homework on this situation rather than show up for the event looking so clueless. But then, Clinton was actually a policy wonk. Somehow, that doesn’t appear to be Obama’s strong suit:

It is not very clear, though, how much the president is in command of his own policy. During Friday’s signing ceremony, Mr. Obama appeared not to know that he would be signing four separate orders and had to refer repeatedly to White House Legal Counsel Greg Craig for answers to questions from the media. Nor was he able to answer a question about the future of the detainees. For the Obama White House, closing Gitmo is essentially a symbolic action.

Symbolism is the essence of Obama. His political philosophy is such a shallow pool that it would take very little heat or light to transform it into a puddle. However, heat and light is not going to be supplied by anyone currently on watch. He will sail his little boat and the press in the pool will treat it as though he were walking on water.

What a situation: our Leader is a useful idiot. I fear that we may deserve him.

15 thoughts on “Obama’s Signs and Signals”