I reported last month that Tariq Ramadan had been invited to a panel discussion in Vienna sponsored by the Akademikerbund. A few days ago Mr. Ramadan withdrew from the event, and the residents of Vienna were denied the opportunity to ask questions of the silver-tongued grandson of Hassan al-Banna, the founder of the Muslim Brotherhood.

Our Austrian correspondent ESW was present at “Is there a Euro-Islam?”, and has prepared a report for Gates of Vienna.

His visit to Vienna this past Tuesday should have been a showdown: Tariq Ramadan, the eloquent, good-looking salesman of Euro-Islam, at a podium discussion at the Political Academy of the Austrian People’s Party (ÖVP). Finally, questions would have been answered, questions that have been lingering for a while, questions that so far have not been answered at all or in an unsatisfactory way. But, alas, it was not possible. “Professor” Ramadan cancelled his appearance, providing no reason for his last-minute no-show. What are we to think of that? 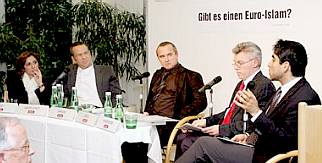 However, the event — titled “Is there a Euro-Islam?” — did turn out to be a success, not only because of the members at the podium, but also thanks to the wonderfully Muslim-acting Muslim ladies, who did not shy away from coming all the way to the Political Academy to praise “Islam as the solution” to us kuffar.

The Political Academy was successful in finding substitutes for Ramadan; however, I am reluctant to use to word “adequate” since there is no proper substitute for Ramadan himself. As a result, Euro-Islam and Ramadan’s views could not be discussed. However, the discussion was definitely a heated one.

It was obvious from the introductory statement by Franz Fiedler, the president of the Austrian Association of Academics, that this would not be a schmoozing event. He said, “Whoever sets foot into Austria must be aware that unlimited constitutional and freedom rights apply to him or her and that Quranic commands may not constitute an imperative instruction for action.” This statement caused a few colorfully clad Muslim girls to get up and leave.

Moderated by Peter Danich, the deputy director of the Political Academy, the discussion began with short statements by the members of the panel. Wolfram Eberhardt, a journalist at the German magazine FOCUS and a Middle East expert, demands that Muslims reform their religion. The West must continue to conduct an open and hard dialogue, including one with radical Islamic scholars. His words, “One must not demonize every visible sign of Islam. I also have no problem with mosques. It is essential (to know) what is said there.”
– – – – – – – – –
However knowledgeable Eberhardt may be about Islam and the Middle East, all of which is apparent in his latest book (Im Auftrag Allahs: Gläubiger, Fanatiker, Terroristen), he does not seem to be aware of the true function of a mosque. Perhaps he should consider reading Sam Solomon’s treatise “The Mosque and its role in society”. Eberhardt’s opinion is certainly not helpful.

Mouhanad Khorchide, an Islamic scholar at the University of Vienna, does not believe that religion is the problem. For most migrants (i.e. Muslims) religion is of little or no importance. There are social problems which make living together in harmony difficult. Second-generation Turks do not feel fully accepted in both Austria and Turkey, and some of them would then take shelter in religion. At the same time they are forced to choose between being a “European or a Muslim” The opportunity lies in being both. But this takes time.

“But we no longer have this time available to us,” says Christian Zeitz, member of board of the Vienna Association of Academics. “What are the results of 50 years of continuous dialogue?” Referring to the Islamization efforts that have already been successful during the course of history (i.e. the past 1,400 years), Zeitz turns to the Muslims in the audience: “Did you come to Austria to live out your religion or to Islamize this country?”

This statement angers Sirvan Ekici, in charge of integration matters for the ÖVP. She considers herself a devout Muslim who fasts during Ramadan and sends out invitation for Iftar-dinners, yet she also readily admits that she has no knowledge of Islam. “My parents definitely did not come to Austria to Islamize it.” Her parents were laborers.

Ekici is obviously well integrated: she speaks fluent German and is highly educated. She works tirelessly (her own words) for the integration of migrants and she is a member of the Vienna city council. And even though she demands absolute loyalty to the Austrian constitution and respect for the historically-grown cultural traditions, she does not tell the audience how this can work and how successful she has been so far. She also tells us that it is not a contradiction to feel fully European and Muslim at the same time. She fails to mention, however, that Islamic law prescribes something entirely different, that integration is simply not possible for Muslims. Is she really unaware of this, or is she lying to herself and us?

In Ekici’s opinion, dialogue between Muslims and non-Muslims works wonders. She cites examples such as open mosque days and interreligious dialogue at Iftar-dinners. “It is necessary, though, to encourage (Muslim) interest in Austrian politics.” Currently, there are only four Muslim members of the regional parliament at the moment (and one Muslim MP).

Christian Zeitz says that Austrian Muslims must distance themselves from problematic suras such as the one legitimizing the beating of women (4,34). Ekici counters that it is a waste of time to cite the Bible or the Quran. Khordchide, in turn, accuses Zeitz of reading the Quran like the fundamentalists do. This also causes resistance in the audience. “The Quran is a book of revelations”, says one young Muslim girl from the Austrian Muslim Youth. “It was revealed during a time span of 23 years. Not every sentence can be considered an absolute.” It is telling that this opinion is not the one of the Muslim majority. In many, if not most, Muslim countries this young lady might not live to see the next day.

Let me finally note that the subsequent discussion with members of the audience was heated and emotional. Of course there were quite a few whiny comments from Muslim girls about how oppressed they are (by Austrian society) and that there no marriages between 50-year-old men and six-year-old girls. Interestingly, not one Muslim man in the audience asked a question.

Nevertheless, many of those in the audience left the event with a reality check: The chasm between the two “cultures” was all too obvious. We were successful in showing these differences. Now we must build on this foundation.

The Vienna Association of Academics demands the following from Muslims in Austria:

(Note: This is the first time these demands have been made public)

We demand the following:

Let us wait and see whether and how the Faith Community will react to these demands. It is time to act on those demands.

Resources used in this report: